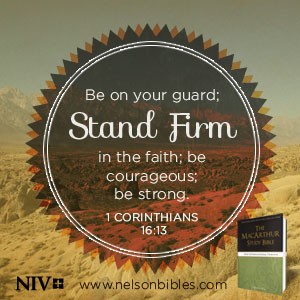 Editor’s Note: John MacArthur is one of the most respected pastors and authors in America today. The MacArthur Study Bible in the KJV was a project that he called “The most monumental project of my life.” The original KJV version has been translated and read all over the world. Now, The MacArthur study Bible has been reformatted and is available in the NIV, NASB, and NKJV.

The letter is named for the city of Corinth, where the church to whom it was written was located. With the exception of personal epistles addressed to Timothy, Titus, and Philemon, all Paul’s letters bear the name of the city where the church addressed existed.

As indicated in the first verse, the epistle was written by the apostle Paul, whose authorship cannot be questioned seriously. Pauline authorship has been universally accepted by the church since the first century, when 1 Corinthians was penned. Internally, the apostle claimed to have written the epistle (1:1, 13; 3:4– 6; 4:15; 16:21). Externally, this correspondence has been acknowledged as genuine since A.D. 95 by Clement of Rome, who was writing to the Corinthian church. Other early Christian leaders who authenticated Paul as author include Ignatius (ca. A.D. 110), Polycarp (ca. A.D. 135), and Tertullian (ca. A.D. 200).

The city of Corinth was located in southern Greece, in what was the Roman province of Achaia, ca. 45 mi. W from Athens. This lower part, the Peloponnesus, is connected to the rest of Greece by a four-mile-wide isthmus, which is bounded on the E by the Saronic Gulf and on the W by the Gulf of Corinth. Corinth is near the middle of the isthmus and is prominently situated on a high plateau. For many centuries, all N-S land traffic in that area had to pass through or near this ancient city. Since travel by sea around the Peloponnesus involved a 250-mile voyage that was dangerous and obviously time consuming, most captains carried their ships on skids or rollers across the isthmus directly past Corinth. Corinth understandably prospered as a major trade city, not only for most of Greece but for much of the Mediterranean area, including North Africa, Italy, and Asia Minor. A canal across the isthmus was begun by the emperor Nero during the first century A.D., but was not completed until near the end of the nineteenth century.

The Isthmian games, one of the two most famous athletic events of that day (the other being the Olympian games), was hosted by Corinth, causing more people-traffic. Even by the pagan standards of its own culture, Corinth became so morally corrupt that its very name became synonymous with debauchery and moral depravity. To “corinthianize” came to represent gross immorality and drunken debauchery. In 1 Corinthians 6:9, 10, Paul lists some of the specific sins for which the city was noted and which formerly had characterized many believers in the church there. Tragically, some of the worst sins were still found among some church members. One of those sins, incest, was condemned even by most pagan Gentiles (1 Corinthians 5:1).

Like most ancient Greek cities, Corinth had an acropolis (lit. “a high city”), which rose 2,000 feet and was used both for defense and for worship. The most prominent edifice on the acropolis was a temple to Aphrodite, the Greek goddess of love. Some 1,000 priestesses, who were “religious” prostitutes, lived and worked there and came down into the city in the evening to offer their services to male citizens and foreign visitors.

The church in Corinth was founded by Paul on his second missionary journey (Ac 18:1ff.).As usual, his ministry began in the synagogue, where he was assisted by two Jewish believers, Priscilla and Aquila, with whom he lived for a while and who were fellow tradesmen. Soon after, Silas and Timothy joined them and Paul began preaching even more intensely in the synagogue. When most of the Jews resisted the gospel, he left the synagogue, but not before Crispus, the leader of the synagogue, his family, and many other Corinthians were converted (Ac 18:5–8).

After ministering in Corinth for over a year and a half (Ac 18:11), Paul was brought before a Roman tribunal by some of the Jewish leaders. Because the charges were strictly religious and not civil, the proconsul, Gallio, dismissed the case. Shortly thereafter, Paul took Priscilla and Aquila with him to Ephesus. From there he returned to Israel (vv. 18–22).

Unable to fully break with the culture from which it came, the church at Corinth was exceptionally factional, showing its carnality and immaturity. After the gifted Apollos had ministered in the church for some time, a group of his admirers established a clique and had little to do with the rest of the church. Another group developed that was loyal to Paul, another claimed special allegiance to Peter (Cephas), and still another to Christ alone (1:10–13; 3:1–9).

The most serious problem of the Corinthian church was worldliness, an unwillingness to divorce the culture around them. Most of the believers could not consistently separate themselves from their old, selfish, immoral, and pagan ways. It became necessary for Paul to write to correct this, as well as to command the faithful Christians not only to break fellowship with the disobedient and unrepentant members but to put those members out of the church (5:9–13).

Before he wrote this inspired letter, Paul had written the church other correspondence (5:9), which was also corrective in nature. Because a copy of that letter has never been discovered, it has been referred to as “the lost epistle.” There was another noncanonical letter after 1 Corinthians, usually called “the severe letter” (2 Corinthians 2:4).

Sample of Verse Exegesis: An examination of 1 Corinthians 10:16

Let’s take a look at the support the MacArthur Study Bible offers for a single verse, in this example from 1 Corinthians 10:16:

cup of thanksgiving. The proper name given to the third cup during the Passover Festival. At the last Passover with the disciples, Jesus used the third cup as the symbol of His blood shed for sin. That cup became the one used to institute the Lord’s Supper. He set the cup apart as a token of salvation blessing before passing it to the Twelve (see notes on Luke 22:17, 20).

a participation. This word means “to have in common, to participate and have partnership with.” The same Gr. word is used in 1 Corinthians 1:9; 2 Corinthians 8:4; Philippians 2:1; 3:10. Commemorating the Lord’s Supper was a regular and cherished practice in the early church, by which believers remembered their Savior’s death and celebrated their common salvation and eternal life that reflected their perfect spiritual oneness.

the bread. This symbolized our Lord’s body as the cup symbolized His blood. Both point to His death as a sacrifice for the salvation of men.

Get our Free Download! Read the Entire Book of 1 Corinthians from The MacArthur Study Bible

John MacArthur offers his depth of knowledge and years of Bible study in this single volume Study Bible. Mr. MacArthur promises that the reader will “discover what the Bible means by what the Bible says.” Included at the beginning of each book of the Bible is a complete tutorial of the book’s Title, Authorship and Date, Background and Setting, Historical and Theological Themes, Interpretive Challenges within the book, and an outline for Teachers and students to break the book into teachable sections.

The MacArthur Study Bible offers readers a verse-by-verse commentary to help with the understanding of what each verse means. It is one of the most complete, well rounded, and accessible Bible resources on the market today. 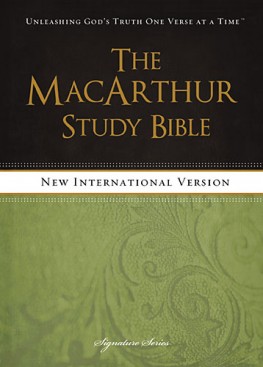 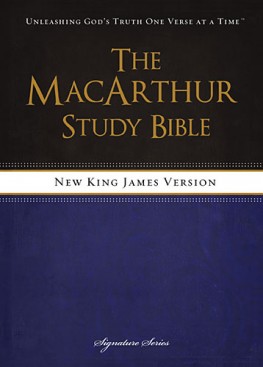