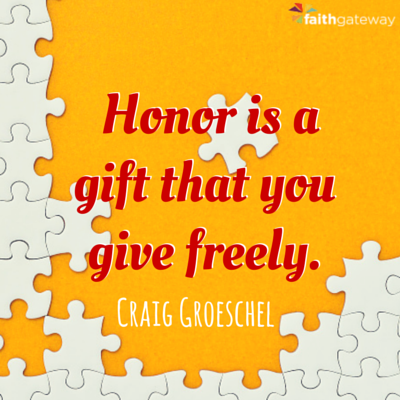 The Bible says that there are several different groups we should honor. I’m going to focus only on the three that I believe are most important for you to become all God wants you to be.

First, we’re supposed to honor our parents. The Bible is incredibly clear on this one. It’s so important, God actually included it in his top ten in Exodus 20:12:

Honor your father and your mother, so that you may live long in the land the Lord your God is giving you.

So often, the opposite happens. I can’t tell you how many times I’ve seen teenagers (and even children) speak disrespectfully to their parents. It seems like some kids even go out of their way to dishonor their parents, trashing them online or even to their faces. And our culture seems to celebrate this behavior, often playing it as comedy.

And this verse doesn’t apply just to children. God doesn’t give an upper age limit on honoring our parents. We don’t do it just when we’re little kids. We continue doing it when we’re in our twenties, our thirties, our forties, our fifties. If you have children yourself, a good way to demonstrate honor to your parents is to speak well of them in front of their grandchildren. Maybe your parents didn’t live honorable lives. Maybe your dad ran off with another woman. Maybe your mom struggled with substance abuse. Whatever their circumstances, it really doesn’t matter.

It’s respect that people have to earn; honor is a gift that you give freely. [tweet this]

Find ways you can honor them, not just because they deserve it but because it’s the right thing to do.

Honor Those in Authority

The next group that the Bible says we ought to show honor to includes those who are in authority over us. Romans 13:1-7 explains that God, in his sovereignty, has placed people in positions of leadership. In this context, verse 7 says that you should

give to everyone what you owe them: If you owe taxes, pay taxes; if revenue, then revenue; if respect, then respect; if honor, then honor.

(Notice that this verse makes a distinction between respect and honor again.)

Last year, I was invited to speak at a leadership event that was to span several days. I spoke on Thursday. Then on Friday, former president George W. Bush and his wife, Laura, were scheduled to speak. That Friday afternoon, as we were waiting for the president and the first lady to arrive, I was visiting casually with the gentleman seated next to me. I learned that he was not a fan of President Bush — at all.

He told me, “I didn’t vote for him. I never liked him. I didn’t agree with his policies.” But that was just the warm-up. This guy went on and on, specifying the things he didn’t approve of and why.

Suddenly a door opened and a soldier walked in, carrying the flag of the United States of America. “Hail to the Chief” began to play, and everyone in the room rose to their feet, cheering and clapping. The president walked in, holding the first lady’s hand. I glanced sideways at this man standing next to me, the man who couldn’t stand the guy, and tears were streaming down his face. He was clapping and smiling broadly.

In that moment, my neighbor was no longer a Democrat or a Republican. He wasn’t a fan of President Clinton or of President Obama, and he wasn’t a critic of President Bush. He was simply a citizen of the United States, freely offering honor, if not to the man, then at least to the office. The feeling in the room was electric. Everyone there showed honor.

We’re supposed to show honor not only to powerful people in government but to all of those who are in authority over us. If you play sports, show honor to your coach. If you’re a student, honor your teachers. If you have a mentor, show them honor. Honor your boss. Even if you believe deep down that you’re smarter than your boss, you still need to show that person honor. Maybe you’d like to be the boss someday. Before you can learn to be over, you have to learn to be under. Practice being under by showing honor to those people whom God has put over you.

If you’re a married woman, but you don’t particularly like your husband — maybe he’s not the leader that you want him to be — honor him. If you treat him as ordinary and common, he won’t feel empowered to lead your family. But if you honor him, give him the opportunity to rise to the occasion, to become honorable. Treat him like he’s the man you want him to be; with grace and honor, help him envision himself as a better man.

The third group God calls us to honor is pastors and church leaders. The Bible tells us that we are to show honor to those who are spiritually instructing and discipling us:

The elders who direct the affairs of the church well are worthy of double honor, especially those whose work is preaching and teaching. — 1 Timothy 5:17

Giving honor where it is due has tremendous power. [tweet this]

When you show honor to those who lead you spiritually, I guarantee you that they will take very seriously the role that God has placed them in.

Since most of us have been raised in a dishonoring culture, how can we grow in honor? The English Standard Version of the Bible translates Romans 12:10 like this:

So it’s really that simple. Take that verse to heart, and not only show honor to other people but try to outdo one another in showing honor. What does that mean? That means that you go out of your way to demonstrate honor to them. Whether they deserve it or not (and honestly, many won’t), you give it out freely. Treat honor like it’s the most renewable resource on the planet.

If there are people who take care of your children during the week while you work, show them honor. Find out their names. Learn their birthdays. Bring them gift cards and handwritten thank-you notes. When a person serves you, whether at a business or a restaurant, make a point to be overly courteous to them. Tell them that you appreciate what they do. Offer them some encouragement and a smile. Tip generously. Ask them if there’s anything you can pray for them for. If they give you something to pray about, then pray for them.

At your church, single out the people who serve you. Thank them. Show them honor. Write a note to those who minister to your kids. Bring a gift to your small group leader. Email the worship pastor to say thanks for helping you grow closer to God through worship. Outdo one another in showing honor.

Lean in. Listen closely. Outdo each other. Lift them up. Encourage them. Esteem them highly. Tell them you value them, and then demonstrate it by your actions. You might just be surprised to see them grow into what you speak to them in faith.

I’m convinced that the reason our culture is known worldwide as a place of dishonor is that we, as a culture, have dishonored God. All true honor is born out of a heart surrendered to the King of Kings. Psalm 22:23 says,

Our culture tends to treat God as common. We’re too familiar with him. We refer to Him as “the Man Upstairs” or “the Big Guy,” or we say things like “Jesus is my homeboy.” Jesus is not your homeboy. He is the soon-to-return, ruling, reigning King of Kings and Lord of Lords. He is the Alpha and the Omega. When He returns, it will be with a sword. He is the Righteous One who shed His blood so that we would live.

We have to stop treating God as common or ordinary. When we’re able to see Him as He is, we’ll honor others not because we want to be good people but because His name is on our hearts. We’re no longer common or ordinary, because having His name on us makes us valuable. We have God’s autograph written across our hearts just as a great painter would sign His masterpiece.

If you’re a Christian, what makes you valuable is the name of Jesus written on your heart. Because of what He did for us on the cross, our only reasonable response is to do something with our lives that honors Him. Sadly, the Bible describes a truth that is much more common:

The Lord says: ‘These people come near to Me with their mouth and honor Me with their lips, but their hearts are far from Me.’ — Isaiah 29:13

That won’t be us. That won’t be you. We will not be a generation that gives God only lip service. Instead, we’ll show Him honor from our hearts. It’s because of what He did that we are who we are. We should value others and show them honor, and we should help them see that they were valuable enough for Jesus to give His life for.

Living with honor reminds us of who we really are, who God is, and how much He loves those around us. When we place our selfish egos on the altar of honor, we become aware of the value that God places on each and every life, including our own.

In there a situation or relationship in which you need to restore your expression of honor? With Fathers Day coming in two weeks, consider how you can honor your dad, step-dad, or father-figure, even if he failed to be the kind of dad you needed. How do you show honor to those in authority over you? How do you honor God in your life? Leave a comment today and join the conversation on our blog!