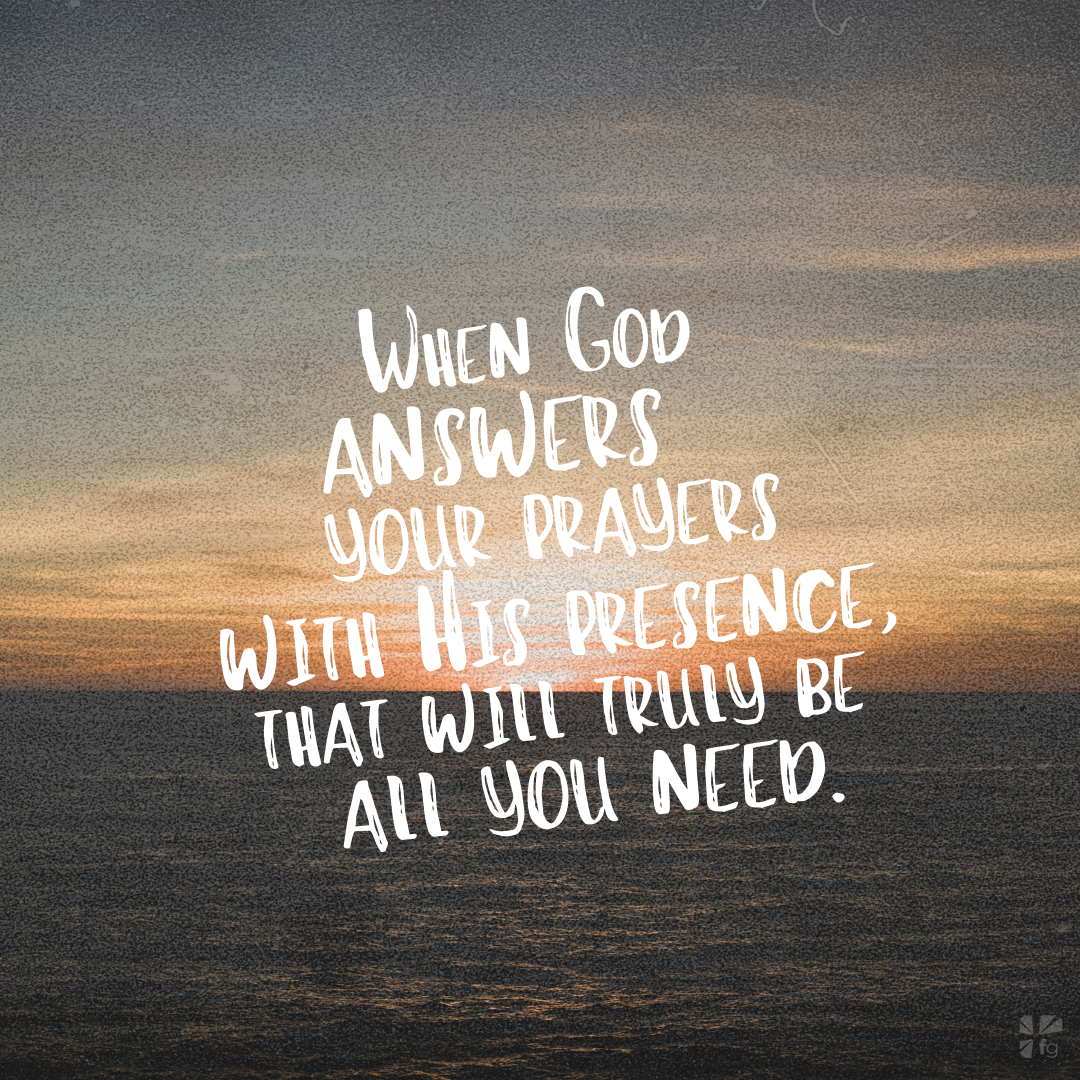 The word of the Lord came to [Abraham]… “A son who is your own flesh and blood will be your heir.” He took him outside and said, “Look up at the sky and count the stars — if indeed you can count them.” Then he said to him, “So shall your offspring be.” Abram believed the Lord, and He credited it to him as righteousness. — Genesis 15:4-6

Abraham had a very specific question for God — the God who had at one point promised to make him a great nation (Genesis 12:2). Abraham and Sarah were still childless, so how exactly was God planning to keep His promise? Abraham raised this issue, respectfully addressing the Promise-Maker as “Sovereign Lord” (15:2).

Samuel went and lay down in his place. The Lord came and stood there, calling as at the other times, “Samuel! Samuel!” Then Samuel said, “Speak, for your servant is listening.” — 1 Samuel 3:9-10

Think about your most recent ah-hah! Moment. What dots did you finally connect? What insight did you suddenly have? It’s a great feeling, isn’t it? Now imagine the feeling that comes when the ah-hah! Moment marks the realization that God is alive and present with you.

Three times Samuel had heard his name called, and three times he went to Eli the priest. Who else would have called him? Samuel said each time, “Here I am; you called me.” The first two times Eli’s response was, “I did not call; go back and lie down.” The third time, though, “Eli realized that the Lord was calling the boy” (1 Samuel 3:8).

God is always alive and present and very active in His children’s lives. We just aren’t always expecting or aware of his calling.

When you think God may be calling to you, stop and listen carefully and prayerfully.

The Lord is my rock, my fortress and my deliverer; my God is my rock, in whom I take refuge, my shield and the horn of my salvation. He is my stronghold, my refuge and my savior. — 2 Samuel 22:2-3

We are concerned about a person or situation. We pray fervently and ask others to join us in praying. We remind God of His promises in Scripture. We look at the cross and thank Him for His immeasurable love. But when He graciously responds, is our reflex action heartfelt praise and impassioned thanksgiving? Probably not often enough.

Delivered from Saul, David celebrated God’s goodness with a joyous psalm, but the Lord doesn’t require original songs of praise from us. Like any parent, He simply loves to hear, “Thank You!”

And, wonderfully, we can pray David’s words of praise as our prayer of thanks. After all, the same God who protected David from Goliath and Saul is our Rock, our Fortress, and our Deliverer, saving us from our enemies and protecting us from “torrents of destruction” (v. 5). Thank you, David, for giving us words that express our hearts!

Lord, transform my heart so that it reflexively Gives thanks when I notice Your blessings.

What is your reflex action when something horrible happens? Worry? Rage? A mad search for help? Maybe you call friends for advice. Or maybe you go to the Lord in prayer.

This woman was a friend of the prophet Elisha. She and her husband had set aside a bedroom for this itinerant prophet who had been named to carry on Elijah’s work. Clearly, God’s power was on Elisha. He purified a spring to provide water for an entire town. He supplied a poor widow with a bottomless jar of oil. And he prophesied that this childless friend would have a son — and she did. But now the son was dead. Clearly, Elisha’s God was one of unspeakable power.

In the face of death, this heartbroken mother had no earthly source of help. What advice could any friend give her at this point? She knew she had to go to the man of God.

When tragedy strikes, go to men and women of God to receive their prayer support and love.

At the first light of dawn, the king… Hurried to the lions’ den… He called to Daniel in an anguished voice, “Daniel, servant of the living God, has your God… Been able to rescue you from the lions?” Daniel answered… “my God sent His angel, and He shut the mouths of the lions. They have not hurt me.” — Daniel 6:19-22

When in your life have you been most terrified? Step back into those feelings — your heart pounding, barely breathing, your prayer simply, “help me, God!”

Now take those feelings into the lions’ den with Daniel. These are lions. And they are carnivores that have not been fed recently, and you are a potential meal. Hear now the low rumble of their roar as they pace the den, circling their easy prey. Feel their warm breath. Smell their gamey scent. Notice their razor-sharp teeth and claws. This is the danger God delivered Daniel from — and “the king was overjoyed” (Daniel 6:23). After Daniel was lifted from the den, “no wound was found on him, because he had trusted in his God” (v. 23).

A footnote: “The men who had falsely accused Daniel were… Thrown into the lions’ den… Before they reached the floor of the den, the lions overpowered them and crushed all their bones” (v. 24).

Which devotion best relates to your current prayer life or the season you find yourself in? We’re all walking through a unique stage in our faith journey and we treat prayer differently with ever new obstacle. We’d love to know what you’re praying for currently. Come share your thoughts on our blog!