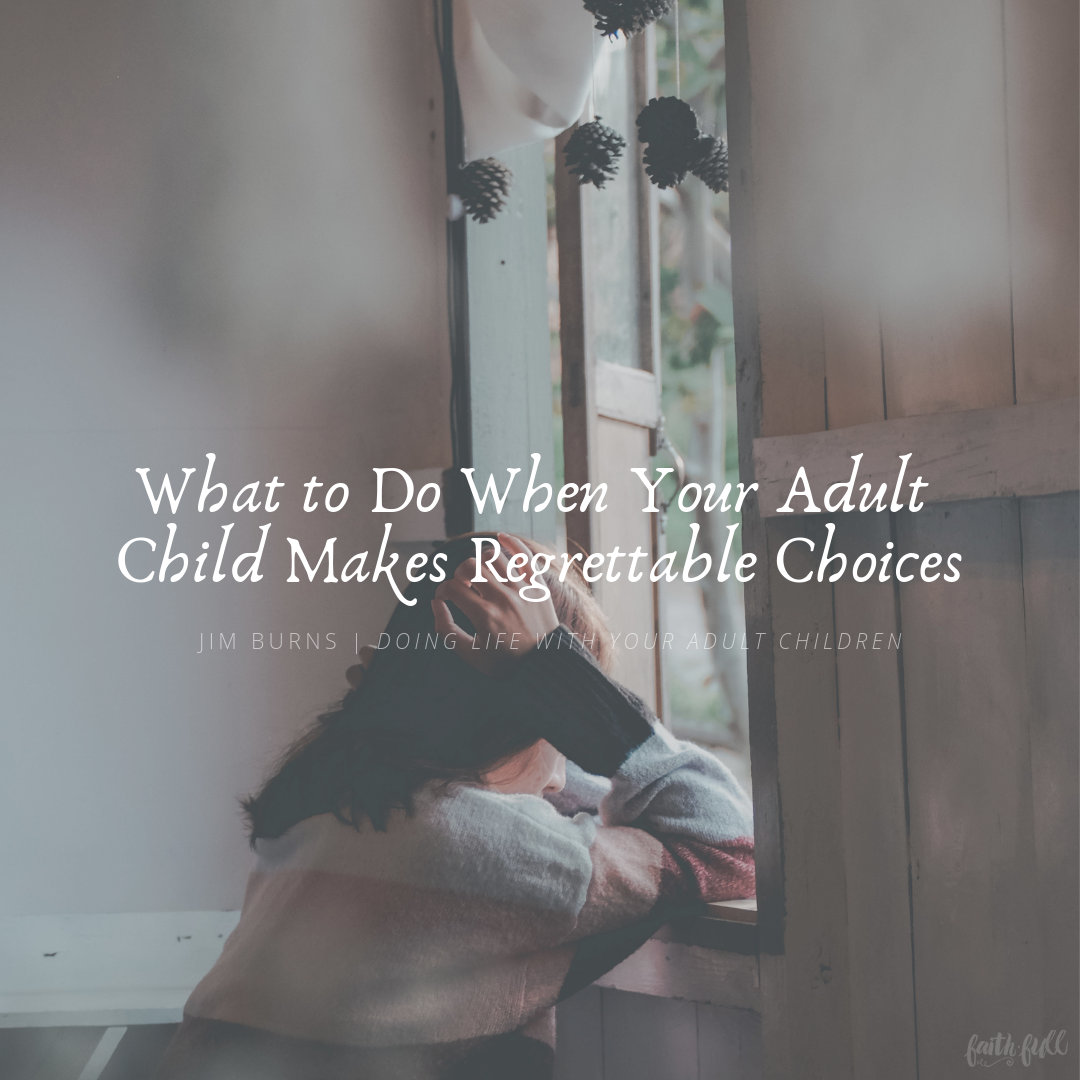 When an adult child violates our values, makes poor choices, or gets in deep trouble, we often question our parenting abilities. Our doubts shout at us:

The what-ifs can paralyze our souls and wreak havoc on our confidence as parents.  One of the greatest heartbreaks for a parent is watching a child waste his or her life, potential, or opportunities with poor choices. One woman said to me, “I’ve been through a lot of pain in my life, but I’ve never felt heartbreak like I have through the poor choices of my kids.” A friend of mine whose son struggled with drug and sex addictions put it this way: “It feels like a death. Or at least the death of a dream. No doubt about it, ‘big children bring on bigger problems.’”

When your young-adult kids have serious adult-sized problems, the kind that can derail a healthy and productive life, your heart may break, but your child’s choices don’t have to break you. Your child’s regrettable decisions do not make you a bad parent.

Even good parents have children who make poor choices.

It may be too late for prevention, but it’s never too late for redemption. Miracles do happen. Sometimes they take the form of a rapid change, but most times they are a slow climb toward a better life. Author C. S. Lewis wrote, “Hardship often prepares an ordinary person for an extraordinary destiny.” Your child’s failures may well become the foundation for a whole new life. This is the power of redemption.

There is perhaps no more powerful story of redemption than Jesus’ story about a prodigal or lost son. It’s a tragedy that ends with a victory. I’m guessing you already know the story, but every parent of a child who’s made regrettable choices needs to be reminded of it.

A father had two sons, and the younger son left home and lived a life contrary to the values of his family. He traveled to a distant country and squandered all his money in what Jesus described as “wild living” (Luke 15:13). When a famine hit, the son ended up with the only job he could find, which was feeding pigs, the kind of job no good Jewish boy would ever take. Finally, he came to his senses and set out for home.

The boy’s father had no doubt been brokenhearted when his son left. He likely experienced deep pain and worry over his lost son daily. Jesus said that the father saw his son “while he was still a long way off” (Luke 15:20). It’s a detail that makes it clear the father had been watching and waiting, hopeful every day for the moment his son would return. When the son arrived, the father welcomed him and threw a party.

Although the story is called the parable of the prodigal son, it has been said that it’s more accurate to say it’s the story of a loving father. I sometimes imagine there was a conversation before the son left home that went something like this:

Son: “I’m leaving home and there really is nothing you can do about it.”

Father: “I don’t want you to leave. I think you are making a very bad mistake with lifelong consequences. Nevertheless, you are an adult and I can’t forbid you to leave. But know this: our home will always be open to you.”

The father displayed great love and wisdom in his response. “I think you are making a bad decision and a poor choice with potentially terrible consequences. But I’m your father and my home is always open to you.” What some parents don’t understand is that you can still show love as your children suffer the natural outcome of their actions.

The son eventually did come home and his father warmly and lavishly welcomed him, but that didn’t mean everything went back to the way it was. Most likely, there were still consequences. I wonder if after the welcome-home party there was another conversation that went something like this:

Father: “Son, I am so glad you are home. I have prayed for this day to arrive. You are welcome to stay, but you need to know that there are expectations and boundaries.”

Son: “Dad, I am so sorry. You were right. I will do my best to live according to the way I should have been living all along. I am humbled by your loving grace.”

Although Jesus doesn’t spell out how the younger son responded, I like to imagine he was willing to change and to abide by the father’s lovingly set boundaries. We can learn so much about how to handle a prodigal child from this amazing parable. This father was loving yet firm. He offered grace but still expected his son to live by the family’s values. My guess is that when most children return home after straying, there is much to celebrate. But don’t expect it all to be easy. All of us are complicated and some of those same kids come back with addictions or habits of the heart that need work. Always be aware that some miracles take time.

WHAT TO DO WHEN YOUR ADULT CHILD MAKES REGRETTABLE CHOICES

No one said parenting a child who violates your values would be easy, but the best chance for success is when there is good communication and understanding between you. Here are some strategies that work.

Offer your adult child tough love. Tough love is a disciplined and strongly expressed boundary to promote responsible behavior and long-term change. You offer tough love when you set firm limits and enforce consequences. Tough love might mean not allowing a drug-using adult child to move back into your home without first getting help. Tough love is not being willing to bail your son out of a financial crisis one more time, even if it costs him dearly. The purpose of tough love is to stop the problematic behavior and encourage positive growth and responsibility in your adult child. Don’t confuse tough love with meanness. The purpose of meanness is to be hurtful, which is the opposite of tough love.

Tough love is intended to put your child on the path to healing and wholeness.

Don’t bail them out. If you take on the consequences your child should be experiencing, you are robbing them of an opportunity for growth and change. Their crisis doesn’t need to be your crisis. Crisis is almost always self-defined, which means that what you consider to be a crisis may not be a crisis to your child or vice versa.

Don’t allow your adult children to make their problems your problems.

Don’t be a one-topic parent. Even in the depths of heartbreak and worry, you still need to bring a balanced approach to the relationship. You don’t have to give up your values to keep the relationship strong. I know a woman whose daughter had left her family’s values behind and was living the life of what might be called a party girl. When the woman asked me what she should do, I said, “Since she already knows how you feel, take her to dinner once a week and talk about other things. Get to know her beyond what is breaking your heart.” It worked! Eventually, her daughter turned the corner on her choices.

Don’t dump your anger and frustration on your child. It’s never a good idea to dump our “stuff” on them. If you need to have a conversation, and you will, make sure you aren’t just unloading your feelings on them. That will only lead to resentment and further distancing. Even in the toughest times, endeavor to be their greatest cheerleader. A good friend of ours was deeply upset by her daughter’s irresponsible sexual behavior and unwed pregnancy. But she was determined to maintain their relationship and found the strength to be the main support for her daughter through the pregnancy. Did she still need to vent her anger and frustration? Yes, but she did that with a trusted friend and not her daughter.

Find support for yourself. Sometimes the most difficult grief to bear is one that comes from watching our children live with self-destructive decisions, and this is something we just can’t do alone. What are the replenishing and supportive relationships in your life? A healthy and supported parent has a much better chance of helping their adult child. A dad at our church brought up his son’s drinking problem in a men’s group he attended. It was a smart move because he needed the group’s support and encouragement. He also admitted to his men’s group that he had a drinking problem as well, and they helped him find a treatment center. The day after he entered treatment for his alcoholism, his son followed him into the treatment center. The dad’s willingness to seek help and support was the turning point that changed his son’s life.

Never underestimate the power of seeking out support for yourself.

Some issues are so complex or deeply rooted that they won’t be solved with a new set of boundaries and expectations. Some examples include:

For issues such as these, seek professional expertise and counsel. The Bible is clear:

Where no counsel is, the people fall: but in the multitude of counsellors there is safety. — Proverbs 11:14 KJV

Whatever the issues causing your heart to break, remember that ultimately, the question in the heart of your adult child is, “Do you still love me?” Although it can take a great deal of discipline, we can shower our adult kids with love even when they wander off the path we had hoped for them.

God’s love for us is the perfect example of the unconditional love we must strive to lavish on our children.

His love is unfailing and never ending, and yet he allows us to experience the natural consequences of our choices. The storyline of the entire Bible is one in which God’s people rebel against Him, suffer the consequences, and then are restored by God’s redemptive love, which draws them back to Him. That’s the love we need to have for our children, a love that draws them back to us. The promise of God’s story is that love prevails.

Excerpted with permission from Doing Life with Your Adult Children by Jim Burns, copyright Jim Burns.

Are you heartbroken over the choices, the lifestyle, or the direction of your adult child(ren)? You’re in good company, my friend. Our kids may make poor life choices that worry and disappoint us, but it’s not our job to fix them. It’s our job to pray for and love them and stay in relationship as best as we can. Come join the conversation on our blog. We want to hear from you about parenting adult children when it gets hard! ~ Laurie McClure, Faith.Full