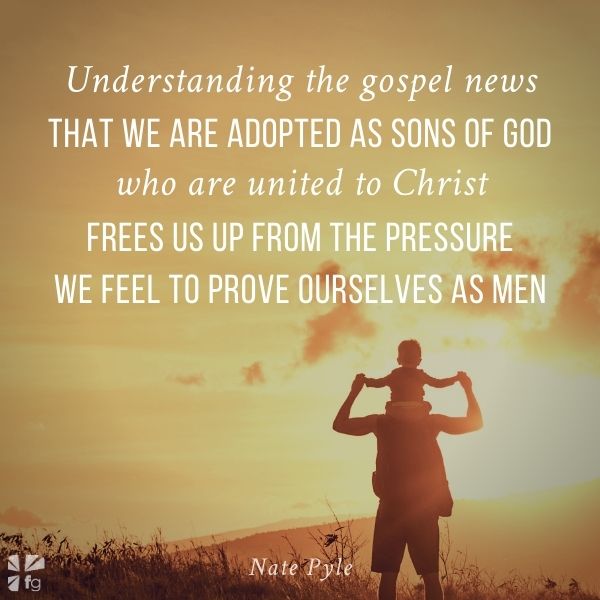 Every culture has its ideal vision of masculinity.

Sociologist Erving Goffman once wrote, “In an important sense there is only one completely unblushing male in America: a young, married, white, urban, northern, heterosexual, Protestant, father, of college education, fully employed, of good complexion, weight, and height, and a recent record in sports… Any male who fails to qualify in any one of these ways is likely to view himself — during moments at least — as unworthy, incomplete, and inferior.”1

That was written in 1963, and, by and large, it is still true today. Our definition of what it means to be a man has changed little in the last fifty years. I have had conversations with men who don’t feel like men because they are overweight. Once, a young man who started attending our church shared over coffee that he had just graduated college and now was trying to find a woman to marry. When I pressed him about this, he told me that getting married was the next step in becoming a man. Another man I know is a stay-at-home dad. After he lost his job, his wife has been the primary financial provider for their family for the last couple of years. While he loves staying home with his kids, he told me the hardest part is when people question him about why he doesn’t go get a job. The implication to their question is clear: If you don’t provide for your family, you’re not man enough.

Cultural ideals of manhood must be challenged because they inherently exclude those who don’t — or can’t — conform. They rob those men of their manhood. If a man doesn’t work to conform to the cultural standards, his manhood is met with a barrage of questions meant to shame him into conformity:

Why are you single?

Why don’t you have kids?

Why don’t you like sports (or worse, You did theatre?)?
Why are you staying at home while your wife works?

The underlying question is always, What’s wrong with you as a man?

Our cultural definition of being a man has had significant impact on our churches’ expectations of men. Men are often exhorted from the pulpit to be a leader, be confident, make hard decisions, provide for your family financially, fight battles, be a good father, and love your wife well, because, after all, this is what God says men should do. Many of these are fine things — if you have a family. Even in our churches the assumption is that all men get married; all men have kids; and all men are leaders. When you boil it down, there is little difference between Erving Goffman’s description of the ideal American man and the American church’s ideal man.

The obvious question is, “Who is influencing who?”

One of the great joys of my life is that, on most Sundays during the year, I stand in front of a couple hundred people and proclaim the Gospel. I get to look out over the faces of people as they listen to the good news of Jesus. When I look over the congregation I see a myriad of expressions of manhood. I see men who fit the earlier description, and men who don’t. Men who are a little heavier, who love ham radio, who are loud, who are quiet, who are leaders, who are not leaders, who are not athletic, who are not married, who are not white, and who are stay-at-home dads.

Are they men? Man enough?

Trying to come up with a single definition of manhood is an exercise in reductionism. It will always fail to include someone or some group, thereby even if unintentional, pronouncing them not-men. Unfortunately, recent efforts in American Christianity to get men to “act like a man” have been just as alienating for men who already feel inferior against an impossible standard. One man told me about a church men’s retreat he attended right out of college. He was young and impressionable, and the man speaking said that men, as good stewards and leaders of their family, don’t pay for things they can do for themselves. He went on and on about fixing cars, to the point that the young man left feeling like he would be a lousy husband and father because he couldn’t fix a car. To say it more simply, the church, like culture, can measure men against a singular archetype and shame those who fail to conform.

Think to [the film] The Sandlot. When the two groups of boys square off, there is a very telling picture. In one group, you have those who are clean-cut, athletic, and elite. They fit the model of being a man. One doesn’t have to question their masculinity because you can see it. They are more confident. They walk with their backs straighter. They are more aggressive. Their bodies are better proportioned.

While these two groups are just boys at this point, it is easy to see that, as they age, one group will have an easy time proving they are men, and the other group will have a much more difficult time proving they are men, because one group fits the ideal picture of masculinity in our culture. Even American culture, with its proud multicultural mosaic, is not above owning a singular vision of the ideal man — this overarching archetype for all men to strive for — but, like all cultures, demanding that our men conform to our predetermined ideals.

Understanding the gospel news that we are adopted as sons of God who are united to Christ frees us up from the pressure we feel to prove ourselves as men.

Consider some of the men we would hold up as heroes — men whose faith inspires our own. David committed adultery and conspired to have his mistress’s husband killed. If there was ever a test to prove one’s heart was aligned with the heart of the God who said, “You shall not murder” and “You shall not covet your neighbor’s wife,”2 I’m guessing David would have failed to prove himself worthy. And yet, despite David’s unworthiness, God proclaims him worthy of the title “a man after my own heart.”3

Do you remember when Peter tells Jesus he will go to prison and even die for Jesus? I imagine Jesus smiled kindly at Peter, wrapped his arms around him, and then said, “Peter, I love you. But you are going to disown Me three times before the sun rises.”4 And Peter did. He failed to prove himself loyal. Failed to prove he would keep his word. Despite his failure, Jesus reinstates Peter with the responsibility of feeding His sheep.5

Paul was the world’s greatest missionary. Yet, before his conversion he hunted down Christians and breathed out “murderous threats” against them.6 In fact, Acts 9 tells us just how far Paul was willing to go to persecute Christians. In verse 1, we’re told that Paul went to the high priest and asked for letters to take to the synagogues in Damascus so whenever he found Christians there, he “might take them as prisoners to Jerusalem.”7 While this tidbit seems benign, Paul is actually enacting an old law from a treaty in 142 BC that allowed Israel to extradite refugees from surrounding countries. He is going out of his way to find Christians and bring them to Jerusalem to imprison them. And yet God says, “I deem you worthy to be My apostle to the Gentiles.”

God does not require people to prove themselves as worthy before He calls them to Himself. Rather, in His calling of people, God deems them as worthy. Do you see how backward that is from what we normally experience? For most of us, experience has taught us that acceptance comes only when we show ourselves worthy of it. I find in my work as a pastor that one of the most common struggles people share with me is wondering how God could ever love them because, in their eyes, they aren’t worthy. Aren’t good enough. Most feel as if they must do something, prove something, before God could ever love them.

This is the Gospel: that we do not need to prove ourselves to God, but rather, by His good, divine choice, God declares us to be His adopted sons and daughters. In His grace and by His divine choice, God accepts us as sons; He calls us co-heirs with Christ. This unbelievable privilege is made possible through the reconciling death and resurrection of Jesus. Amazing grace it is — that this title, son, is bestowed on us long before we prove ourselves worthy of it. Grace is this — that though we continually relapse into behavior uncharacteristic of sons of God, we are never declared unworthy of our adoption. Despite having every reason to be, “Jesus is not ashamed to call [us] brothers.”8 It is this good news that allows us to be the men whom God created us to be. Proving oneself to be a man is an anxious endeavor. You never know if you are good enough. Never know if you have done enough. Always left wondering if others are perceiving you to be the man you are working so hard to protect.

Always questioning if you are man enough.

Our union with Christ unequivocally answers this question in the affirmative.

This is the power of the Gospel. You are a son of God. A brother of Jesus. You have been called according to the good purpose of God. While this may not shore up your masculinity in the eyes of other men, it should give you the confidence to be who you are. Not who culture wants you to be. Not who others goad you into being. Freed by this gospel, you don’t have to force yourself into some pretense so you measure up. Be who you are. That’s who God created. You are “God’s handiwork, created in Christ Jesus to do good works, which God prepared in advance” for you to do.9

How does it set you free to know that you are a son of God with nothing to prove? We’d love to hear your thoughts in the comments!

Wow! Nate Pyle has written a brilliant and much needed book… The self-made, independent, muscle-bound, don’t-take-nothing-from-no-one American man shares little in common with Jesus as he’s revealed in Scripture. Thank you Nate for writing this book!
— Preston Sprinkle, author of Charis: God’s Scandalous Grace for Us

Man Enough breaks from the pack of man-books to liberate men from false conceptions of masculinity. Male readers will not come away with a deflated sense that they are never man enough. Women readers will encounter a brand of manhood here that gives hope to the men they love.
— Carolyn Custis James, author of Malestrom: Manhood Swept into the Currents of a Changing World

In our sexualized society where confusion reigns, Nate Pyle has written a much needed book. Through powerful, vulnerable story telling of his own journey into manhood, he offers a solidly biblical look at the journey that every man must take.
— Jim Herrington, Mission Houston