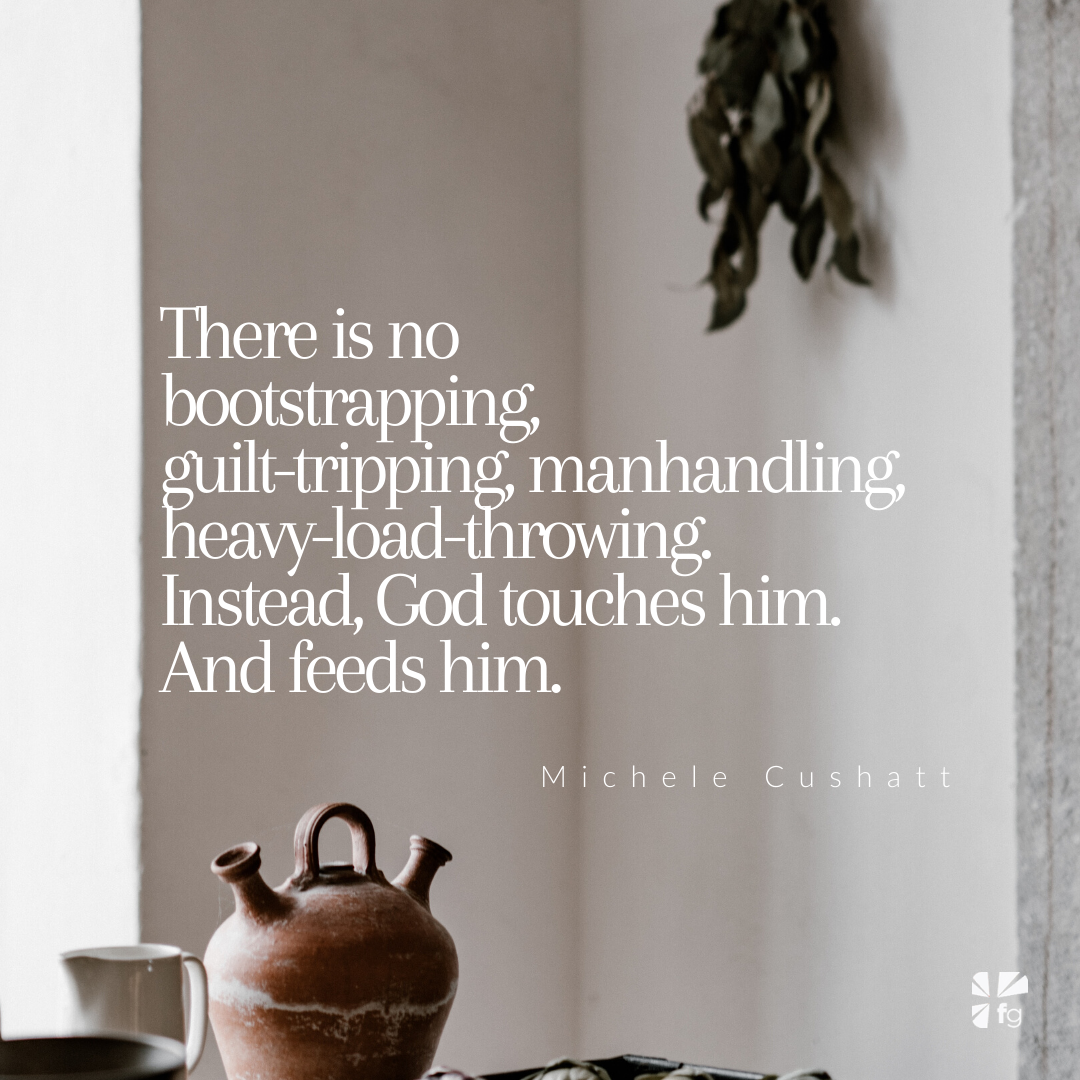 Mental pain is less dramatic than physical pain, but it is more common and also more hard to bear. The frequent attempt to conceal mental pain increases the burden: it is easier to say “My tooth is aching” than to say “My heart is broken.” ~ C. S. Lewis, The Problem of Pain

A waiting person is a patient person. The word patience means the willingness to stay where we are and live the situation out to the full in the belief that something hidden there will manifest itself to us. ~ Henri Nouwen, Eternal Seasons

I’ve spent more than my share of dark nights curled up and alone, screaming at a storm raging outside the window of my life, knowing I could do nothing to bring it to a stop.

But still I waited for someone to find me rocking and weeping, to lift me up, to hold me close and tell me everything was going to be okay.

There was a time I doubted the validity of post-traumatic stress disorder (PTSD). Until I went to the dentist a few months after cancer. One moment I was sitting down in a chair for a replacement filling and cap, and the next moment I was hyperventilating in a near panic. The dentist and hygienist looked bewildered, confused by my reaction to a routine procedure. Not only would it be over in a handful of minutes, I’d done it before. My reaction didn’t reflect my circumstances. And although I knew this intellectually, I couldn’t do anything about my physical response to it. I was at the mercy of memory.

Somehow, I managed to get through the appointment, as well as several other dental visits since. But after surviving head and neck cancer, I no longer respond to medical appointments with nonchalance. I now must dig deep for emotional resilience and allow space for recovery. Each time, I return home exhausted, hands shaking and tears brimming. Even when I know everything is okay.

Signs of my trauma show up in other ways. Each year, during the months of November through March, I struggle to sleep. Those are the months when cancer showed up — in 2010, in 2013, and again in 2014. I often have nightmares during the holidays, either reliving my almost dying or enduring a new diagnosis that requires the same suffering. Each time, I wake up in a sweat. And it takes me a full day to convince myself it was only a dream.

And then there are the random encounters, online or in person, with people who bear the same scars that I do. And while my heart wants to connect with them, my body rebels against it, as if their proximity stirs up too many memories. I find myself either on the verge of anger or tears, or fighting an urge to run away as fast as possible.

A few weeks ago, while I was getting blood drawn for yet another blood test, the phlebotomist told me a story of her son. In early childhood, he endured a freak accident that nearly killed him. She spent months next to his bedside, helping him through multiple surgeries and hospitalizations and nursing him back to health. He’s now in his late twenties, married and with children, and his medical trauma sits two long decades in the past. Even so, he told her about a recent routine physical and blood workup. When the nurse ripped open a packet containing an alcohol swab to clean his skin, the smell sent him into a panic. He experienced a rapid heart rate, difficulty breathing, and an overwhelming sense of terror. All because of the familiar smell of alcohol. Twenty years later and his body remembers.

It took my own experience with PTSD — first with my youngest children and then with myself — to recognize that traumatic responses aren’t reserved only for Vietnam veterans and victims of violent abuse. Neglect, accidents, a family death, and significant medical crises can all mark a body. Then gender, biology, personality, and various other hidden factors can individualize the traumatic experience. This means several individuals who experience the same circumstance may respond in different ways. Regardless, one response doesn’t make any other less valid.

Ignoring or minimizing trauma and responses to it does nothing to help a person heal. I know this now. Within three months of almost dying, I resumed all of my responsibilities at home and dove back into traveling, writing, and working. My compulsion baffles me, why I thought I needed to bootstrap my way through each day, stuffing my feelings so deep within I could pretend, temporarily, that they didn’t wound me as they did. And although this determination to move forward saved me in one regard, the trauma of what had happened would not be ignored. Like cancer, it only grew with my lack of sober attention.

One of the most dangerous Christian practices (and expectations) is the compulsion to present a put-together, unflappable faith.

On the whole, we haven’t done a very good job of making space for a struggle that lasts longer than we think it should. We may give the struggler grace for a day, a week, a month, a year. But sooner than later, we decide it’s high time she pulled it together. This pressure — whether spoken or unspoken — only pushes the sufferer to hide and neglect the long, hard process of healing.

The night in the basement, holding the pain reliever while wondering if suicide would be my only real relief, was the result, in part, of this pressure to perform. For months I had tried to stay strong, keep myself together, present a tough, faith-filled front. But eventually, I ran out of fight. I could no longer muscle my way through my reality.

In the years since, I’ve experienced too many other dark nights when the thought of death seemed to be my only out. But how could I tell those close to me about the black hole that swallowed me? How could I let them know how desperately I wanted it all to end? Good Christian girls aren’t supposed to toy with such thoughts. To reveal the truth would invite more disappointment and shame. And I’d already had enough of both. The pressure I felt came from within and without, but the result was the same. I felt alone in my nightmare, too embarrassed and ashamed to admit I needed help.

Although it was painful, I feel a measure of gratitude for my descent into the dark, because it helped me to see what I needed to see. There was no pretending anymore. No muscling through the losses. Instead, I needed to honor the pain by telling the truth about it, to myself and to others. I needed to see my circumstances for what they were and validate my experience of them.

And I needed to admit, after years of pushing hard through too many impossible circumstances, that I’d finally reached the end of myself.

There’s an oft-used cliche that goes something like this: “God will never give you more than you can handle.” I have a few things to say about this claim, but I’ll begin with this: It’s a load of garbage. It may roll off the tongue reeeeaaal niiiiiice, but it is a big, fat lie.

In spite of the number of times I’ve been the unwilling recipient of that mantra, I’ve experienced more than I can handle more than once. Each time, in spite of my extraordinary efforts, I had nothing left to give. No tools, no insights, no solutions, no strength. My characteristic sleeve-rolling, hard-work-and-determination grit dissolved. Struggle and suffering had taken me under. I was flat-faced on the ground. Period.

But don’t take my word for it. The Bible is filled with stories of those bent in two under the weight of hard circumstances.

Elijah was a prophet, a devout one. In an age of paganism, rebellion, and persecution, Elijah served God with passion and fearlessness. Determined and obedient, he delivered God’s words to a stubborn horde of Israelites again and again, urging them to turn back to God. He even dared to confront King Ahab and his wicked wife, Jezebel, something that required not a little amount of courage considering their penchant for murdering God’s prophets. They turned their sights on Elijah, the “troubler of Israel” (1 Kings 18:17).

Rather than cower, Elijah challenges Ahab and his false prophets to a duel — a showdown between their god, Baal, and Elijah’s God. When the day arrives, 450 prophets of Baal stand against a lone Elijah, the last of God’s prophets. The 450 prophets of Baal pray like champs. No god replies from the skies. But when Elijah prays a single, sincere prayer, God comes down in a consuming fire (1 Kings 18).

At this point, Elijah expects Ahab, Jezebel, and the Israelites to come to their senses, to turn from their wickedness and once again follow God. But that’s not what happens.

Now Ahab told Jezebel everything Elijah had done and how he had killed all the prophets with the sword. So Jezebel sent a messenger to Elijah to say, ‘May the gods deal with me, be it ever so severely, if by this time tomorrow I do not make your life like that of one of them’. — 1 Kings 19:1-2

Terrified, Elijah runs for his life (1 Kings 19:3) all the way from Jezreel to Beersheba, a distance of about a hundred miles. Then leaving his servant behind, he continues another full day’s journey into the wilderness alone. Because some disappointments don’t allow space for company.

There, collapsed under a broom bush, Elijah reaches the end of himself.

Elijah’s bush wasn’t all that different from my basement. Despair. Frustration. Disappointment. Exhaustion.

Life often feels like a series of one-hundred-mile days. While I’ve never had a price on my head, I know what it feels like to pay a high price to live. Like Elijah, there are days when my enthusiasm over my mighty God is tempered by the reality that He doesn’t always behave the way I expect Him to.

Buried in frustration and defeat, I collapse into despair, questioning myself even more than I question Him. Surely I’ve done something wrong. I’m not the faith giant I’d hoped I’d be. Instead, I’m no better than any other struggler, weary and flat-faced.

At this point someone invariably offers me the load-of-garbage maxim. God will never give you more than you can handle. The irony? They throw it as a life preserver, hoping to save me from drowning in my circumstances. Instead, the cliche lands like a two-ton weight, finishing me off.

Which is why it matters to me how God responds to Elijah’s despair. Rather than a worthless cliche, He offers Elijah comfort.

What does God do?
He doesn’t rebuke him.
He doesn’t quote Scripture at him.
He doesn’t tell him to get his act together or his butt in church. He doesn’t tell him how much worse it could be.
And He doesn’t tell him that He will never give him more than he can handle.
There is no bootstrapping, guilt-tripping, manhandling, heavy-load-throwing.
Instead, God touches him. And feeds him. Twice.
Skin to skin, a tangible acknowledgment of presence.
And bread hot out of the oven. Comfort food. Maybe a casserole with extra cheese. Likely a pan of double-chocolate brownies. Nourishment of body and soul.
Why?

Because the journey is too much for you.

It is too much. The weight you’re under is too much. If you wonder what Jesus’ response is to your exhaustion, fear, and struggle, look at Elijah. Rest. Eat. Be comforted. Come share your thoughts with us on our blog.