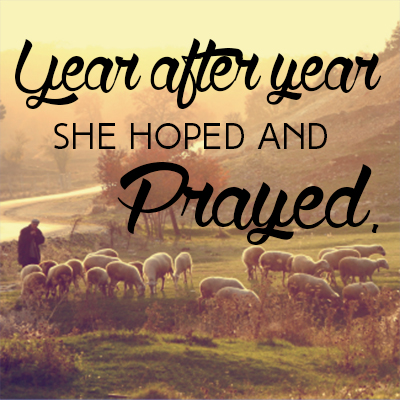 My mother’s name was Sarah. She was the fifth daughter of Boaz, a weaver of fine wool prayer shawls in Jerusalem. Sarah was taller than most men, ample hipped and heavy-set, with thick, curly hair, and wide green eyes in a square, practical face. Her teeth were straight and strong. Such things as teeth mattered.

Sarah’s weaving of prayer shawls was skilled, her work meticulous. Her shawls were worn by the Temple priests and pilgrims alike.

Sarah’s one flaw was that she walked with a limp. But her father was quick to remind everyone that Sarah was a cheerful, loving girl and a hard worker. She would bless any man in search of a good helpmate.

One after another, Sarah’s older sisters married. There were, however, no suitors for Sarah. Her limp, though not severe, was problematic. It was not easy for her to ascend and descend the hundreds of steps in Jerusalem. The streets were steep, and a woman’s duties of shopping in the souk and fetching water would surely be hindered by her handicap. And men desiring to be head of a household did not want the head of a woman taller than their own.

Year after year she hoped and prayed. But there was not one man in all of Israel who asked for Sarah’s hand in marriage.

Sarah resigned herself to remaining an unmarried virgin in her father’s house. Content with her life, she helped her mother and father in the little shop, located fourth from the high end of the Street of the Weavers.

Sarah’s place was at the entrance of the shop. There, she and the loom were a sort of fixture on the street. Sarah played the loom like an instrument. She sang in perfect rhythm with the movement. Passersby gathered in a half circle to watch and listen as she performed.

Sarah was twenty-three, well past marriageable age, the morning her mother’s distant cousin Lamsa ben Baruch entered the shop and fixed his steady gaze upon her as she worked.

“May I help you, sir?” Sarah’s mother asked as she braided and tied the knots on the four corners of the prayer shawl.

“Aye. If you are Rebekah, wife of the weaver Boaz, then I am your cousin Lamsa… here from the land of Gan Eden.”

Sarah’s mother squealed with delight and laid aside her work. “Boaz! Boaz! It’s my cousin Lamsa! Lamsa, from beyond the four rivers of Eden!” She rushed to embrace him.

“You’ve gotten plump, Rebekah,” Lamsa drawled in his Eastern dialect. “But you are still pretty!”

The thump, thump, thump of Sarah’s loom continued as she observed the reunion through the screen of warp and woof.

My grandfather, Boaz, rushed from the back room and clasped Lamsa’s arms. “Lamsa! And you’ve gotten lazy! Fifteen years or more since you delivered your wool to Jerusalem personally! Sent a steward to Jerusalem to us every year but now… look at you!”

Sarah observed Lamsa. He was tall and strong, but not as tall as she. Lean and muscled, he clearly did not live a life of ease. Though she knew he was in his early forties, his grizzled beard and weathered skin made him appear older than he was. Yet his brown eyes, quick and observant, took in details of the shop. His expression was pleased as he observed bolts of fine woolen fabric. A rainbow of colors and constellations of patterns filled two walls. Prayer shawls of intricate weaving were priced for rich or humble, a variety of sizes neatly folded on shelves. Finally, he took in the loom and Sarah and grinned.

“My flocks would be flattered that their wool has become such a fine and holy covering. I will tell them next season when they are shorn.”

Sarah smiled shyly and looked downward but did not break the rhythm of her labor.

A lock of wild black hair spilled from beneath Lamsa’s turban and across his brow like the forelock of a horse.

“There is no wool like the wool of Lamsa’s sheep,” Boaz praised. “It is the fleece of Eden – that is what I tell our customers. Nothing so thick and yet silky. No fleece like it in the world.”

Rebekah clapped her hands in delight. “But you are here with us! How’s the family? Your sons? Three of them, yes? And your wife?”

“My sons are well and strong. Ten, twelve, and fifteen.” His smile faltered. “But my beautiful Jerusha flew away last spring, trying to give me our fourth child, and I am without my great companion.”

Boaz and Rebekah clucked their tongues and wagged their heads in unison at the news.

“So sorry to hear your news!”

“What’s a man without a wife…”

“What’s life without a woman?”

Boaz’s eyes glanced furtively at his daughter. His lower lip extended. Eyebrows rose and fell as he turned his face slightly to one side as a thought passed through his mind and out his ear. “Rebekah, go fetch your cousin something to eat quickly. He has come a long way to see us.”

Sarah thought her father made it sound as though Lamsa had not eaten in a thousand miles and that he had come all the way from Eden just to share a meal.

Sarah saw that her father and mother had invisibly tattooed the word widower across Lamsa’s forehead.

“The dust of Eden remains on our mountains.” Lamsa laid out his wares on the fabric table to show samples of this year’s wool and fine, thick fleeces from his flocks in the North beyond Babylon. “And the glory of Adonai remains in our high mountain pastures. My sheep drink in the memory of it from the waters, and even the grass they graze translates the vision of Adam into this…” He swept his hand proudly over the wool.

Boaz ran his fingers over the miracle produced by Lamsa’s flock and closed his eyes in pleasure at the quality. “Nothing like this wool anywhere.”

Lamsa added, “Ah, brother, you should taste the meat of my lambs. Nothing has such flavor. I dream of it when I am away.”

“You must be hungry! Where is that woman?” Then Boaz called to Rebekah, “Wife, where are you? Hurry! Bring the wine and cheese and bread for Lamsa.”

Rebekah bustled in with a tray of food and a jug of wine. “I must go prepare a feast for you, Lamsa. So many years since we have served you! Our daughter, Sarah, will help me. She is a good cook. Sarah?”

Sarah tried to maintain her smile but was well aware her mother had already mentally discarded the word widower and substituted the phrase potential husband for lame, too-tall Sarah, twenty-three-year-old spinster daughter.

Rebekah motioned to Sarah, and the thump of the loom fell silent. She stepped from her chair and towered over the room.

“This,” Boaz said, smiling, “is our daughter Sarah. She was a child when last you were here.”

Lamsa did not say, “My, how you’ve grown,” but Sarah saw the thought in his expression.

Sarah stepped forward and curtsied. “Cousin Lamsa, I know you by the beauty of the wool I weave, sir.”

Lamsa kissed her on both cheeks. “Cousin Sarah, you play the loom as if it were David’s harp.” He gestured at her father’s wares. “And here is the poetry and the melody and the music of your effort.”

It was a kind thing for him to say, and a true thing as well. Sarah bowed her head slightly, then left with her mother so Boaz and Lamsa could conduct business.

Sarah limped after her mother through the curtain into the back room of the shop. Rebekah lingered to eavesdrop. Sarah, disgusted, waited, hands on hips. The voices of the two men drifted to her.

“I wanted to see you. I remembered you have five beautiful daughters.”

“Yes. Yes. The four oldest are married with families of their own now. They weave for me in their homes.”

Sarah wanted to cover her ears. Her mother was almost vibrating as she panted and wrung her hands at the curtain.

“Mother,” Sarah hissed. “Come on. Please! We have to go to the Street of the Butchers before they close.” Sarah plucked at her mother’s sleeve.

Rebekah came to her senses as Sarah tugged her out the back door of the shop into the late afternoon air. “We must have the butcher prepare a haunch of lamb for us,” Rebekah decided.

“Not lamb, Mother. You heard what Lamsa said about his lamb. Anything but his own will be sawdust in his mouth.”

“Oh, Sarah, you are so clever. Such a clever girl! Why you have never married…”

They trudged up the alley toward the open corridor leading to where butcher shops lined the street known as “Shambles.”

Sarah rolled her eyes. “Mother. The man is not looking for a wife!”

“He most certainly is!” Rebekah would not be swayed.

Rebekah glanced up at Sarah. “And why not you? Why, I ask?”

“And I am not looking for a husband. Not one who lives a thousand miles away.”

What must Sarah have been feeling and thinking? She’d become accustomed to the expectation that she would remain single. Have you had your world turned upside down and expectations upended – even something positive? Leave a comment on our blog! We would love to hear from you! 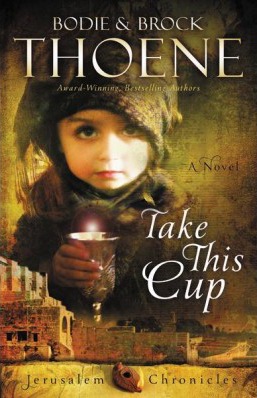