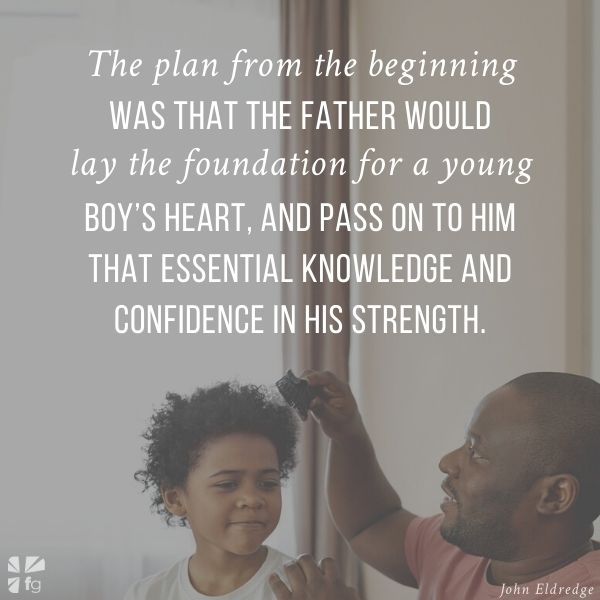 The story of Adam’s fall is every man’s story. It is simple and straightforward, almost mythic in its brevity and depth. And so every man comes into the world set up for a loss of heart. Then comes the story we are much more aware of — our own story. Where Adam’s story seems simple and straightforward, our own seems complex and detailed; many more characters are involved, and the plot is sometimes hard to follow. But the outcome is always the same: a wound in the soul. Every boy, in his journey to become a man, takes an arrow in the center of his heart, in the place of his strength. Because the wound is rarely discussed and even more rarely healed, every man carries a wound. And the wound is nearly always given by his father.

On a warm August afternoon several years ago my boys and I were rock climbing in a place called Garden of the Gods, near our home. The red sandstone spires there look like the dorsal fins of some great beast that has just surfaced from the basement of time. We all love to climb, and our love for it goes beyond the adventure. There’s something about facing a wall of rock, accepting its challenge and mastering it that calls you out, tests and affirms what you are made of. Besides, the boys are going to climb everything anyway — the refrigerator, the banister, the neighbor’s grape arbor — so we might as well take it outside. And it’s an excuse to buy some really cool gear. Anyway, when I climb with the boys we always top-rope, meaning that before the ascent I’ll rig protection from the top of the rock down, enabling me to belay from the bottom. That way I can coach them as they go, see their every move, help them through the tough spots. Sam was the first to climb that afternoon, and after he clipped the rope into his harness, he began his attempt.

Things were going well until he hit a bit of an overhang, which even though you’re roped in makes you feel exposed and more than a little vulnerable. Sam was unable to get over it and he began to get more and more scared the longer he hung there; tears were soon to follow. So with gentle reassurance I told him to head back down, that we didn’t need to climb this rock today, that I knew of another one that might be more fun. “No,” he said, “I want to do this.” I understood. There comes a time when we simply have to face the challenges in our lives and stop backing down. So I helped him up the overhang with a bit of a boost, and on he went with greater speed and confidence. “Way to go, Sam! You’re looking good. That’s it… now reach up to your right… yep, now push off that foothold… nice move.”

Notice what a crucial part of any male sport this sort of “shop talk” is. It’s our way of affirming each other without looking like we’re affirming. Men rarely praise each other directly, as women do: “Ted, I absolutely love your shorts. You look terrific today.” We praise indirectly, by way of our accomplishments: “Whoa, nice shot, Ted. You’ve got a wicked swing today.” As Sam ascended, I was offering words of advice and exhortation. He came to another challenging spot, but this time sailed right over it. A few more moves and he would be at the top. “Way to go, Sam. You’re a wild man.” He finished the climb, and as he walked down from the back side I began to get Blaine clipped in. Ten or fifteen minutes passed, and the story was forgotten to me. But not Sam. While I was coaching his brother up the rock, Sam sort of sidled up to me and in a quiet voice asked, “Dad … did you really think I was a wild man up there?”

Miss that moment and you’ll miss a boy’s heart forever. It’s not a question — it’s the question, the one every boy and man is longing to ask. Do I have what it takes? Am I powerful? Until a man knows he’s a man he will forever be trying to prove he is one, while at the same time shrinking from anything that might reveal he is not. Most men live their lives haunted by the question, or crippled by the answer they’ve been given.

WHERE DOES MASCULINITY COME FROM?

In order to understand how a man receives a wound, you must understand the central truth of a boy’s journey to manhood: masculinity is bestowed. A boy learns who he is and what he’s got from a man, or the company of men. He cannot learn it any other place. He cannot learn it from other boys, and he cannot learn it from the world of women. The plan from the beginning of time was that his father would lay the foundation for a young boy’s heart, and pass on to him that essential knowledge and confidence in his strength. Dad would be the first man in his life, and forever the most important man. Above all, he would answer the question for his son and give him his name. Throughout the history of man given to us in Scripture, it is the father who gives the blessing and thereby “names” the son.

Adam receives his name from God, and also the power of naming. He names Eve, and I believe it is therefore safe to say he also names their sons. We know Abraham names Isaac, and though Isaac’s sons Jacob and Esau are apparently named by their mother, they desperately crave the blessing that can only come from their father’s hand. Jacob gets the blessing, and nearly a century later, leaning on his staff, he passes it on to his sons — he gives them a name and an identity. “You are a lion’s cub, O Judah… Issachar is a rawboned donkey… Dan will be a serpent… Gad will be attacked by a band of raiders, but he will attack them at their heels… Joseph is a fruitful vine… his bow remained steady” (Genesis 49:9, Genesis 49:14, Genesis 49:17, Genesis 49:19, Genesis 49:22, Genesis 49:24). The Baptist’s father names him John, even though the rest of the family was going to name him after his father, Zechariah. Even Jesus needed to hear those words of affirmation from His Father. After He is baptized in the Jordan, before the brutal attack on His identity in the wilderness, His Father speaks:

In other words, “Jesus, I am deeply proud of you; you have what it takes.”

Excerpted with permission from Wild at Heart: Discovering the Secret of a Man’s Soul by John Eldredge, copyright John Eldredge.

Did you receive words of affirmation from your earthly father? What encouragement and strength can you sense your Heavenly Father wanting to speak to you? If you are a father yourself, what words of affirmation can you speak into the lives of your children? We’d love to hear your thoughts in the comments! 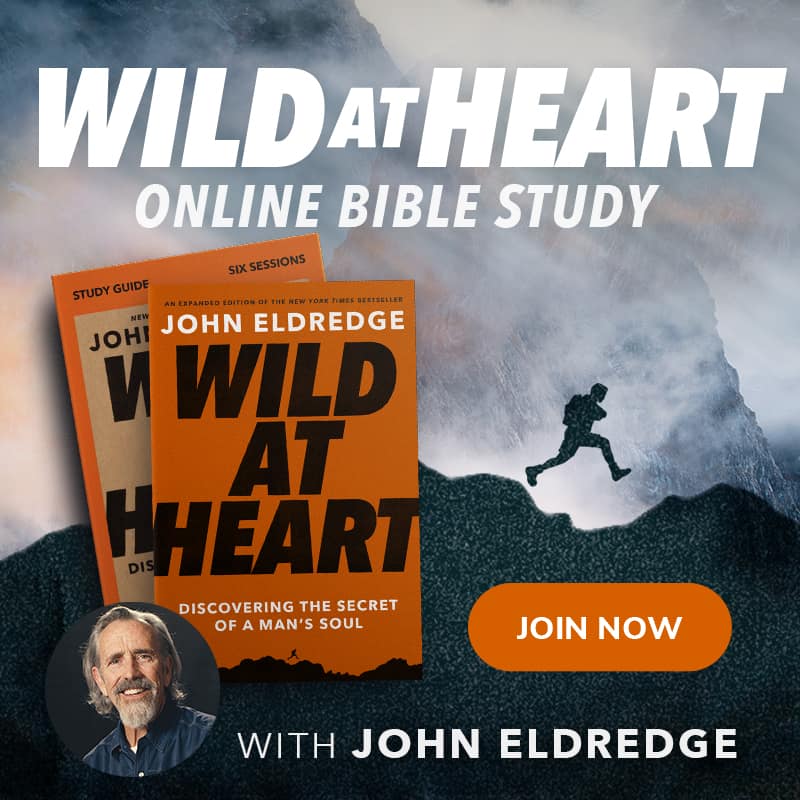