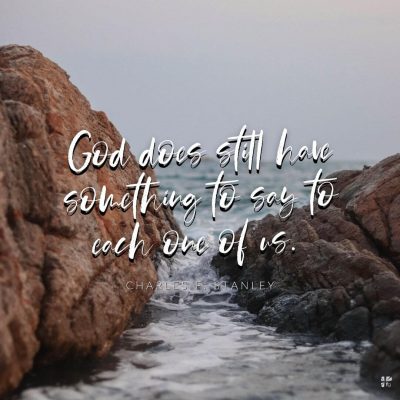 When was the last time you heard God speak to you in your spirit?

I believe God desires to communicate with each of us on a daily basis — in fact, as often as we need to hear from Him, which may be several times in a day. He always has a message for us that is more timely than the daily news and more important than the message that any person on earth can give.

A woman once told me that her mother-in-law had died a few weeks earlier after a very painful experience with stomach cancer. I began to offer my sympathy when the woman interrupted me and said, “I’m glad this happened.”

Most people would consider stomach cancer to be anything but positive. I was interested in hearing more of her story, which she was happy to tell.

“My mother-in-law was one of the most bitter, spiteful, difficult women I have ever met. I knew from the first minute she laid eyes on me that she was determined to be my enemy,” she began. “In fact, my husband and I eloped so we wouldn’t have to deal with her at our wedding ceremony. During the fifteen years that I knew her before her diagnosis with cancer, I never heard a kind word from her lips — except to our daughter. She had a soft spot in her heart for our daughter, but not for anyone else. She wasn’t mean only to me, but to my husband, to her other two sons, and to everyone she encountered. Repairmen told me that they dreaded a call from her home, and even the kindest clergyman we know had a difficult time with her rebukes and sarcasm.”

“She must have been a woman with a great deal of inner pain,” I said.

“Yes,” she replied. “I didn’t realize how much inner pain she had, however, until after her diagnosis. Up to that time, I just figured she was a hateful, mean woman. I didn’t take the time or make the effort to see beyond her façade.”

“She may not have let you see inside her,” I said.

“I believe that’s right,” she agreed. “She had a stone wall around her heart. And she kept this stone wall in place for several weeks after her doctor told her she had cancer. Initially, she was given only a few weeks to live. It was amazing to everyone who knew her and knew her condition that she lived nearly five months.”

“And you believe that was the grace of God?” I asked.

“Yes,” she said. “What happened was this. She refused all offers of help except those from my husband and me. We were the only ones she would allow to enter her home to fix meals for her and to change her bed and do her laundry. When the pain was intense, she’d ask us to read to her or to stay and converse with her to help take her mind off the pain. As the days went by and she saw that I was caring for her with love and concern — not with criticism or hate — she began to tell me her story. I began to understand why she was filled with such anger.”

“Was it something from her childhood?” I guessed.

“Actually from her teen years,” she said. “A woman in her church accused her of stealing funds that the youth group had collected for a ski trip. The accusations were made in a very hurtful and public way, and my mother-in-law was given little chance to defend herself or to reply to the charges. She hadn’t taken the money, but ironically, about the same time she had found twenty dollars in a small coin purse in the gutter of a street near her home. She had spent the money, figuring that she was the beneficiary of finders, keepers. When she offered this explanation as the reason she had had more spending money of late, the woman refused to believe her story and not only called her a thief but a liar.

“My mother-in-law became so angry that she dropped out of church and turned her back on God. For years she had told me she was an atheist. After her diagnosis she modified that to say she didn’t believe in God because if there was a God, He should be just and righteous, and there had been no justice on her behalf in this unfortunate situation.”

“So she had been angry and bitter for decades,” I said.

“Yes, for forty-nine years. The more she suffered with her disease, the more she concluded that there was no God of mercy or kindness. She couldn’t explain away, however, the peace that my husband, daughter, and I felt in our hearts — or the kindness and love that we showered upon her. Bit by bit, she began to soften. She even started asking us to read some of the Psalms to her when she was in pain. We had a couple of conversations about Heaven too.”

“Did she accept the Lord as her Savior before she died?” I asked.

“Yes, but it happened in a way that I would never have anticipated,” she said as tears welled up in her eyes.

“One day when I went over to fix dinner for her, our daughter went along. She said, ‘Granny Lou, I love you. And Jesus told me to tell you that He loves you too.’ I froze in my tracks. I steeled myself for what I felt sure would be my mother-in-law’s reply, probably something like, ‘That’s nice for you to believe.’ Instead, she said, ‘I know He does, dear. He told me so Himself last night.’

“She looked up and I’m sure she read my face, which no doubt expressed great surprise and pleasure. She said, ‘I saw Jesus last night. He came to the foot of my bed in a pool of bright light and said, ‘Lou, I’m here to tell you that I love you. I want you to come live with Me.’”

She continued, “I was so stunned, all I could stammer was, ‘That’s great, Mother Lou.’ She said, ‘I know you probably think it’s strange He would come calling on me like that, and I was pretty surprised myself. I asked Him, “How could You love an old hag like me?” He said, “You won’t be an old hag when you are living with Me.” And then He was gone.’

“Not long after that, she asked my husband to pray the sinner’s prayer with her. And about a week later, she died. Just before she died, she said, ‘I wasted a lot of years railing against God. Instead of my doing all the talking against Him, I should have done a little more listening to Him.’”

“What a tremendous testimony!” I said.

“My mother-in-law isn’t the only one with a testimony,” she said. “The Lord did a great thing in my own heart through this. I discovered in caring for my mother-in-law that I had failed to love as Christ loved. I repented of the hatred I had held toward my mother-in-law and asked God to forgive me and to help me love her as He loved her. He softened my heart and gave me compassion and tenderness toward her that I would never have believed were possible. I find myself looking at difficult people with new eyes. In fact, I’m considering taking a volunteer position with the hospice program. I believe the Lord still has things to teach me and ways to use me.”

“I feel certain that He does,” I said.

Yes, a thousand times yes! God does still have something to say to each one of us. He never reaches the place where He doesn’t have a message that is precisely for us.

Romans 5:8 says that God demonstrates His love for us in the Cross. Jesus is the display of His love! You can still trust Him! ~ Devotionals Daily