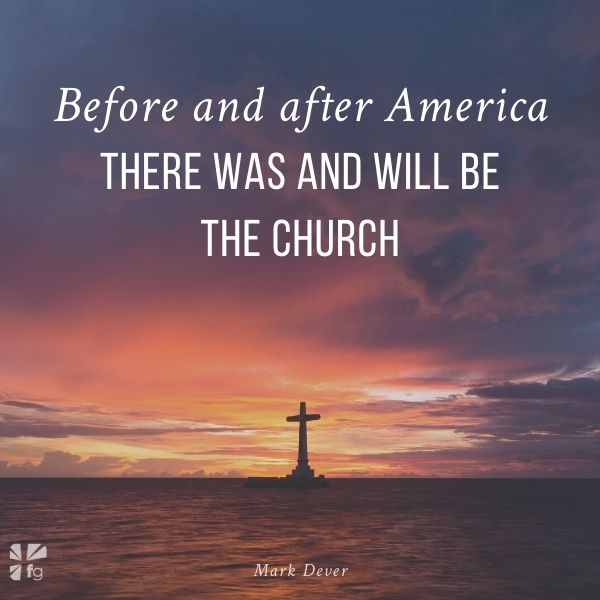 I was in Southeast Asia several weeks ago spending time with a friend, Michael. Michael is an American missionary, and his family has been absent from the United States for more than a decade. Over dinner one evening we strayed into politics.

“I keep up on the news,” he said. “But what’s it really like?” Missionaries are kind of like cultural time capsules. They leave the homeland, and their sense of the homeland’s trends and styles gets frozen in time. “Why are you wearing baggy pleated pants, brother? It’s not the 1990s.” Keeping up on the news, of course, doesn’t give someone a feel for what it’s like living in the States.

“Honestly, it’s really intense,” I said in answer to his question. “There’s a lot of division and contention.” I then spent several minutes trying to give Michael a feel for that division.

For instance, the political Left and Right used to talk and reason with each other. Now they just shout. When a liberal guest lecturer at the University of Notre Dame was asked if she could find common ground with conservatives on race and gender, she answered, “You cannot bring these two worlds together. You must be oppositional. You must fight. For me, it’s a line in the sand.”1

“All these tensions showed up in my own Sunday school classroom,” I told Michael. I taught a class on Christians and government in my church, which gathers six blocks away from the US Capitol building. The Sunday after the election I opened the class with a few comments on our need for unity in the gospel. An older black woman raised her hand and lamented that she had felt no empathy from the white majority. A middle-aged white woman responded by declaring all Democrats “evil.”

Wait, why did I choose to teach this class?

“My concern with all this was not that Christians might disagree on which candidate was best,” I explained. “It was the emotional temperature of the disagreements. Trust began breaking down. Relationships were jeopardized. Christian liberty was threatened.”

Perhaps it’s time for Christians to rethink faith and politics?

Goal: Investing Our Political Hopes Firstly in the Church

Perhaps this goal surprises you. The church isn’t political, is it? Make no mistake, rethinking things means blowing up a few of our present paradigms. And this is one of the first things I want to blow up. Church and state are distinct God-given institutions, and they must remain separate. But every church is political all the way down and all the way through. And every government is a deeply religious battleground of gods. No one separates their politics and religion—not the Christian, not the agnostic, not the secular progressive. It’s impossible.

Let me give you a taste of what I mean about the political nature of the church with a true story about one of my fellow church members, Charles. Charles is a Washington, DC, speechwriter. He has written speeches for cabinet members, party chairmen, and other DC insiders. Charles’s work, to be sure, puts him at the center of American politics.

Charles also spends time with Freddie. Freddie, who was homeless, became a Christian and joined our church. After several good years, the church discovered Freddie was stealing money from members to support a drug addiction, so they removed him from membership. That’s when Charles entered the picture. He began reading the Bible with Freddie, and little by little, Freddie began to repent. Eventually Charles helped Freddie stand before the entire church, confess his lying and stealing, and ask for forgiveness. The church clapped, cheered, and embraced Freddie. Charles and Freddie cried for joy.

Here’s the GDP-sized question: Which Charles is the “political” Charles? The speechwriter or the disciple-maker? To ask it another way, which Charles deals with welfare policy, housing policy, criminal reform, and education? Answer: both. In fact, Charles will tell you that the political life of the disciple-maker fashions and gives integrity to the political life of the speechwriter. It’s the same man working, the same King ruling, the same principles of justice and righteousness applying, the same politics in play.

This speechwriter has many political hopes for better laws and fairer practices. But the greatest of his political hopes comes to life in the congregation. The local church should be a model political community for the world. It’s the most political of assemblies since it represents the One with final judgment over presidents and prime ministers. Together we confront, condemn, and call nations with the light of our King’s words and the saltiness of our lives.

Unlike Charles, however, many Christians in America continue to invest their greatest political hopes in the nation. Since colonial times, we have called the nation “a city on the hill.” Since Abraham Lincoln’s day, we have asked our leaders to provide “a just and lasting peace among ourselves and with all nations.” Yet is it possible that all the contention and division Christians presently face is the catalyst God means to force some of us to rethink where our political hopes really lie?

Just think: Where do we first beat swords into plowshares and spears into pruning hooks? (Isaiah 2:4) Where should love of enemy first dissolve a nation’s tribalism? Where should Lincoln’s just and lasting peace first take root and grow?

Answer: in our local churches.

Conversion makes us citizens of Christ’s kingdom, places us inside embassies of that kingdom, and puts us to work as ambassadors of heaven’s righteousness and justice. Churches are the cities on hills, said Jesus. Not America.

Goal: Learning to Be Before We Do

If our political hopes should rest first in our churches, we must learn to be before we do.

My church gathers six blocks from the US Capitol. It is filled with young people like Charles who moved to DC wanting to make a difference by working in various spheres of government. And their work matters. After all, good governments are prerequisites to the rest of life, including the life of the church.

But as one of the elders, or pastors, of the church, I often remind our Hill staffers, K Street lobbyists, and military officers that real political action starts in the teaching ministry of our church and then flows outward from there—from our relationships with other members, to our families, our workplaces, and beyond. First be, then do. Don’t tell me you’re interested in politics if you are not pursuing a just, righteous, peace-producing life with everyone in your immediate circles.

Paul asked the Jews of his day, “You who preach against stealing, do you steal?” (Romans 2:21).

I’ve got a few questions of my own.

You who call for immigration reform, do you practice hospitality with visitors to your church who are ethnically or nationally different from you?

You who vote for family values, do you honor your parents and love your spouse self-sacrificially?

You who speak against abortion, do you also embrace and assist the single mothers in your church? Do you encourage adoption? Do you prioritize your own children over financial comfort?

You who talk about welfare reform, do you give to the needy in your congregation?

You who proclaim that all lives matter, do all your friends look like you?

You who lament structural injustices, do you work against them in your own congregation? Do you rejoice with those who rejoice and weep with those who weep?

You who fight for traditional marriage, do you love your wife, cherishing her as you would your own body and washing her with the water of the Word?

You who are concerned about the economy and the job market, do you obey your boss with a sincere heart, not as a people-pleaser but as you would obey Christ?

You who care about corporate tax rates, do you treat your employees fairly? Do you threaten them, forgetting that He who is both their Master and yours is in heaven and that there is no partiality with Him?

Finally, as you share your opinions about all these issues on social media, do you gladly share the Lord’s Supper with the church member who disagrees? Do you pray for his or her spiritual good?

“All politics is local,” said former Speaker of the US House of Representatives Tip O’Neill. He spoke better than he knew.2 Politics should begin with our putting away the verbal swords we might be tempted to wield against church members who vote differently than we do. Any political impact our fellow members make in and through the church will last forever. I love how my church’s senior pastor Mark Dever put it:

“Before and after America, there was and will be the Church. The nation is an experiment. The Church is a certainty.”

With these last two goals I want to shift our focus from redeeming the nation to living as a redeemed nation, like Charles and Freddie together. Our congregational lives should tutor us in the justice and love that God desires for all humanity. And then the lessons we learn inside the church should inform our public engagement outside of it. God establishes governments to build the platforms of peace and basic justice on which we can live our lives. Christians, as they have opportunity in government, should therefore work for principles of justice. Yet God establishes churches, among other reasons, to mark off the people who will present a fuller picture of justice. The work of Christians in Washington, your state capitol, your town hall, or your school board means little without the radiating glow of kingdom embassies behind them and the ambassadorial witness of every Christian.

A Christian’s political posture, in a word, must never be withdraw. Nor should it be dominate. It must always be represent, and we must do this when the world loves us and when it despises us. Anyone who tells you, “Withdraw, we’re losing!” or, “Push forward, we’re winning!” may have succumbed to a kind of utopianism, as if we could build heaven on earth. Instead, heaven starts in our assemblies, even if only as in a mirror dimly. Christians are heaven’s ambassadors, and our churches are its embassies. Neither panic nor triumphalism become us. A cheerful confidence does. We represent this heavenly and future kingdom now, whether the skies are cloudy or clear.

Indeed, here is the irony we will discover at the end of all our rethinking: the church’s political task is unchanging. Until Christ returns, the nations will rage and plot in vain. We, meanwhile, point to the Lord and to his Anointed, both in word and deed. We’re on the right side of history so long as we stand with the Lord of history.

Do you find Jonathan’s take on faith and politics comforting? Convicting? Both? We’d love to hear your thoughts in the comments!