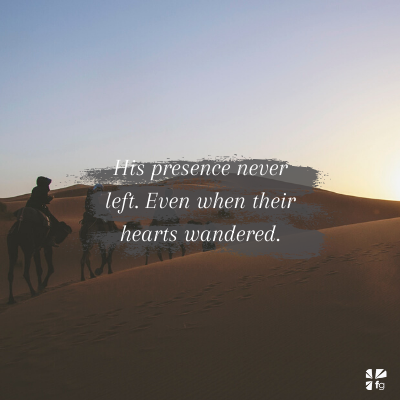 A GOD WHO IS WITH YOU WHEN YOU WANDER

Earth’s crammed with Heaven, And every common bush afire with God; But only he who sees, takes off his shoes. ~ Elizabeth Barrett Browning, “Aurora Leigh”

The trouble is that relying on God has to begin all over again every day as if nothing has yet been done. ~ C. S. Lewis, Letters to Malcom, Chiefly on Prayer

Hanging in my dad’s workshop, above his table and tools, meticulously ordered and aligned, was a four-inch by eight-inch wood plaque including three short words painted and finished to a soft shine with polyurethane. The plaque outdated me by a generation. But its motto had been my dad’s driving mission for much of his life.

I read those words each time I visited Dad in his workshop. And they reminded me over and again that life is a transaction of work and reward.

In some ways, this has served me well. The greatest gift Dad gave me, second only to his faith, was his work ethic. Those who know me know I’m not afraid of a little sweat. Whether it’s writing books and coaching clients, or splitting logs, mowing the grass, and tackling a remodeling project with my husband, a solid day of labor feels good. And I know this is Dad’s influence.

But while the motto motivates hard work, it has no place in faith. When “work and pay” bleeds into Christianity and faith, what was meant to give freedom and life turns into a cruel form of slavery.

Recently, while reading A Hidden Wholeness by Parker Palmer,1 I was reminded of an old ranching practice on the Great Plains during a blizzard. At the first sign of a brooding storm, the rancher or farmer tied a rope from the back door of his homestead to the door of the barn. More than a few ranchers had lost their way in a whiteout while tracking to the barn to feed their animals. Frozen to death in the span of one hundred yards.

I know what it’s like to feel lost in my own back yard. For four decades, I’ve wandered the wilderness of my life and faith hanging on to different ropes. Some of those ropes, thanks to the wisdom of my parents and other spiritual mentors, have proved solid. Ropes like a commitment to studying the Bible, the importance of integrity, and the value of serving a church community.

Other ropes, however, have proved to be less lifeline and more bondage. Ropes like legalism, rigidity, and performance-based spirituality. These didn’t lead me closer to the warm home of the Gospel but farther away from it. I ended up terrified of making God angry or, Heaven forbid, doing something that would cause Him to revoke His love. This fear infiltrated every bit of my faith, wrapping tight like a noose around my neck. In a silent but sinister twist of theology, my goodness ceased being a product of a life-giving love relationship with God and instead became a requirement for securing it.

Work and pay. A rope designed to enslave, not set free.

Here’s the irony: many of those ropes — the sound ones as well as the sinister — came from the same people. These individuals not only inspired my spiritual growth but also unwittingly contributed to my slavery. Why? Because they’re flawed and standing on the outside of Eden’s gates too.

We were all caught in the same storm of the human experience, trying our best to find our way home.

I’m not comfortable with lostness. I want GPS coordinates, a tried-and-true map of where I stand and where I’m going. Ambiguity feels dangerous to a person accustomed to the safety of black and white. Thus, in my twenties, thirties, and early forties, my faith looked a lot like rule-following. A list of do’s and don’ts can feel an awful lot like security. I doubled down and tried even harder to be a good girl, the kind of Christian who compels God’s attention. I attended church, signed up for Bible studies, served in multiple ministries, avoided bad language and bad movies.

Then cancer happened, three times. And three more children who had experienced the worst of the human experience moved into our home and needed our help. And the forty years of a rule-following faith could do nothing to bring the healing we all needed. Hard work and strict morality weren’t enough.

I needed wholeness, not just holiness.

And in spite of my exhausting efforts, I could do nothing to make that miracle happen. Lost in the swirling blizzard of false theology and relentless Job-like circumstances, I grew desperate and disoriented, and the tether of my faith frayed to the point I feared it might snap. In those dark months after almost dying, when my will to live was lagging, I challenged my long-held beliefs. Was God real? If real, was He good? And could I trust Him? I didn’t know.

The Old Testament — especially the story of the exodus — also tells of ropes and tethers, lostness and bondage. Generations after Jacob and his children died, his descendants — the Israelites — ended up in Egypt subject to a cruel pharaoh who had no affection for God’s people.

Bondage of the literal variety. They

The wail of an agony pleading for relief. The good news? God heard. And delivered.

God heard their groaning and He remembered His covenant with Abraham, with Isaac and with Jacob. So God looked on the Israelites and was concerned about them. — Exodus 2:24-25

To begin, God spoke from a burning bush to a runaway prince turned shepherd, a man by the name of Moses (Exodus 3). God sent him from his sheep-tending to Egypt, the place he’d fled forty years before, to demand the Israelites’ release (Exodus 4). After weeks of negotiations — including the kind of God-orchestrated, catastrophic consequences that gave the Egyptians a taste of the suffering they had caused — Pharaoh relented. He set God’s people, the Israelites, free (Exodus 7-12).

Just like that, God rent the ropes that bound His people and tethered them to Himself. No more suffering. No more groaning and wishing for death. Instead, the promise of a new home. And He went with them, becoming the light leading them every step of the way.

By day the Lord went ahead of them in a pillar of cloud to guide them on their way and by night in a pillar of fire to give them light, so that they could travel by day or night. — Exodus 13:21

But Egypt wasn’t to be the end of their storm.

First, Pharaoh changed his mind about his new no-slave policy and chased them down in the desert. With the Red Sea spread out in front and an angry Egyptian army at their backs, the Israelites panicked and lost sight of home.

They were terrified and cried out to the Lord. They said to Moses, ‘Was it because there were no graves in Egypt that you brought us to the desert to die? What have you done to us by bringing us out of Egypt? Didn’t we say to you in Egypt, “Leave us alone; let us serve the Egyptians”? It would have been better for us to serve the Egyptians than to die in the desert!’ — Exodus 14:10-12

In spite of their short-lived celebration, God delivered once again, this time by parting the Red Sea and leading His people straight through the middle of it.

Again, His people exhaled in relief and celebrated their God’s faithful presence:

And when the Israelites saw the mighty hand of the Lord displayed against the Egyptians, the people feared the Lord and put their trust in Him and in Moses His servant. — Exodus 14:31

But then — you knew it was coming — the desert on the other side of the Red Sea turned out to be quite hot and dry, and the Israelites grew thirsty. And then God’s daily manna buffet grew tiresome. They wanted steak, maybe some coleslaw and chocolate cake. Their discomfort blinded them to the bliss of God’s nearness, and they turned bitter.

So God sent quail, a little meat for the barbie.

But again, their belief in God’s presence came up short. When God called Moses to meet Him on Mount Sinai for forty long days and nights, the Israelites panicked in his absence, succumbing to doubt once again.

When the people saw that Moses was so long in coming down from the mountain, they gathered around Aaron and said, ‘Come, make us gods who will go before us. As for this fellow Moses who brought us up out of Egypt, we don’t know what has happened to him’. — Exodus 32:1

In the absence of someone to see and touch, their faith grew weak, their faith rope frayed. By the end of the forty days, Moses returned to see the Israelites dancing and worshiping a gigantic cow made of solid gold.

I could keep going through biblical passages and human generations, but you get the idea. Deliverance by God. Despondency and disobedience by His people. This was their pattern.

Even so. In spite of their long history of screwing up, God never stopped showing up.

His presence never left. Even when their hearts wandered.

The Israelites story is our story. Wandering, disobeying, crying out for relief, returning to Him, wandering again. And, God never leaves. Ever. Come share your thoughts on God’s relentless love on our blog. We want to hear from you! ~ Devotionals Daily