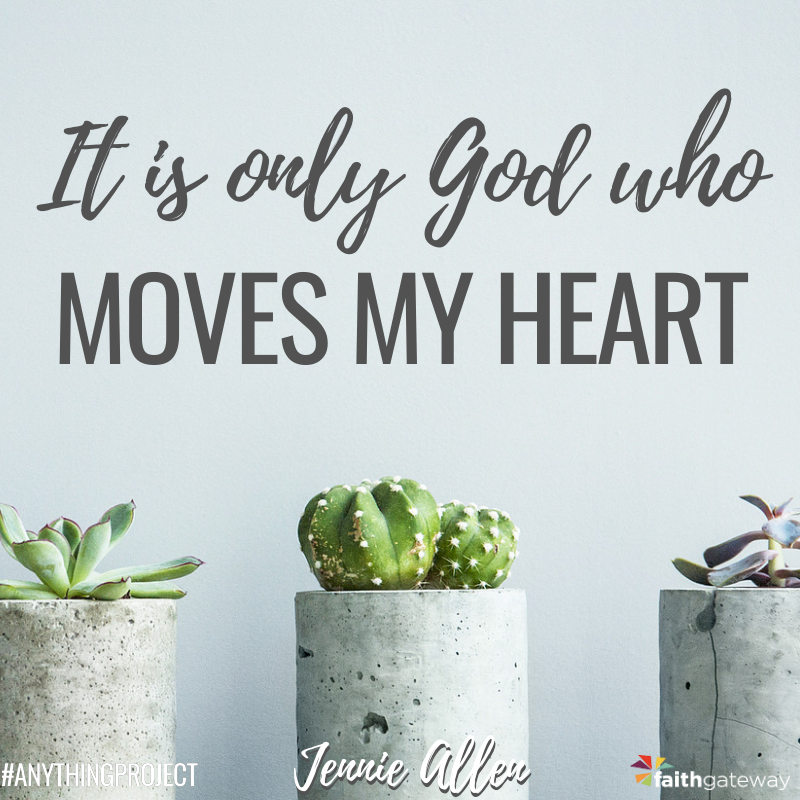 Do you want to be liked or do you want to actually do something significant with this life? Let pleasing God become bigger than pleasing people. [tweet this] ~ Jennie Allen

It was pretty late. Most of the lights were out. I had gotten tied up with friends and packing and forgotten that my parents kept 10:00 p.m. bedtimes. But they were still up waiting for their oldest daughter, the first one to have left the nest — a freshman now at the University of Arkansas — to come home for the weekend.

This night I went into their room  and sat on the corner of their bed, home from college with something important to talk about. I am sure that night I looked to them like their little girl who hadn’t really grown up that much, like I might be asking if I could go to a dance with a cute boy or spend the evening out with a friend.

But I wasn’t asking to go to a dance.

After the wooden crosses at camp, God kept getting bigger to me.

Was I willing to do anything He asked?

When God began awakening in me, He started awakening me for the things of Him. I wanted to be about building His Kingdom, not only at the University of Arkansas but throughout the world. I was feeling led overseas. It was not clear where, but I could go for a year or two and serve through a ministry I was involved with in college.

As I sat on their bed I told them, “Mom and Dad, I feel like God is calling me to go overseas. I don’t know all the details, but I feel sure of this calling in me.”

I looked at them expectantly, waiting to hear what they had to say.

Every conscious person has thoughts, feelings, and passions streaming through him or her. These streams never stop, and they’re rarely filtered. They flood us with messages, and out of those thoughts we live, we make decisions, we create — we even regress as a direct result of these streams moving to and from our hearts and minds.

The obvious streams are our preoccupation with food or sex, or more likely, returning e-mails or building grocery lists. But the deeper streams, the ones that control our lives, those are where we doubt and dream and feel afraid or insecure. Typically we just leave them all there, streaming through us, controlling us.

God often speaks of the heart, or our souls. Nothing about me matters more than my heart, so why can’t I seem to control my heart or even locate it? For most of my life it seems to have had its own way, navigated by fear or desire. It moves and it ends up moving me.

I know my heart is tangibly real in this sense — I see evidence of its affections. But how does one control the heart?

Ever since I was young, I have been fascinated by the life of King David. He made so many terrible mistakes, and yet he bled God. He was passionate. Over and over again throughout his journaling through Psalms, he says variations of this phrase:

And his life flowed out of this mentality. Because he feared and adored God, he feared nothing else. No one else. What was different about my faith than David’s? Why did I live with this stream of fear of people?

The current running through my heart loved un-invisible was no little creek — it was a frantic river drowning out my God and controlling my heart and thus my life.

I loved God, but I loved un-invisible people more. I worshipped them. I bowed down for their gold stars, especially from the two people I found myself looking at that night on the corner of their bed.

I grew up knowing the facts about God, and one of those facts was that He wanted to possess my heart completely. That I would love the Lord, my God, with my all my heart, soul, mind… that all of me would love Him the most (Deuteronomy 6:5). But I couldn’t live it then. I was busy making most everyone in my life happy, and it was working for me — at least most of the time.

I’m lying. It wasn’t working. I was completely wrecked inside.

How does anyone ever make everyone happy? [tweet this]

I waited for my parents’ answer.

Was I the only one torn like this? In love with God and yet eagerly serving everybody but Him?

That night on my parents’ bed, as I told them I wanted to obey God by serving Him in another country, far from their categories and dreams, many streams flooded me. They were streams that, at the time, trumped the planet-building God.

My parents weren’t wrong to express their opinions. I was only eighteen, and I was their daughter. They never said I was forbidden to go. But I was intuitive. I could feel it. I could feel their disapproval.

So I didn’t go. I didn’t even think about going anymore.

In the decade that followed, as much as my love and understanding of God grew, this river of idolatry only rushed stronger and stronger, oftentimes making me anxious, even frantic. Since the invisible thoughts of people are not easily controlled, I would spin, longing to control them.

People had to shrink for me before God had me completely… but how?

When you close your eyes and everything gets scary quiet, you hear your heart. It’s always there, of course. But you never hear its streams and rivers moving through you until it gets uncomfortably quiet.

When I get still and hear the loudest thing in me, it is often that I am chasing everyone but God. And I fear if He gets too close, He’ll see it. But if I let Him close anyway, we sit together on days like that, looking over the frantic river that is wearing me out. He never says, I told you so. He could, but He never does.

Love is jealous… especially God’s love. He wants me, and I want everybody else. [tweet this]

God knows we all have this problem, loving everybody but Him. So He called a prophet to dedicate his days to answering the same question I ask: how do we stop chasing everybody else and come back to God?

God told His servant Hosea to go into town and take a prostitute as his wife. God saw Israel pursuing every idol but Him — similar to my ways — and this was His way of talking to Israel about it. Hosea obeyed and married the prostitute Gomer. Together they had several children, and though Hosea was a loving, gracious husband and provided all she needed, Gomer kept going back to other lovers who abused her and never loved her back. The streams of her heart were nearly drowning her.

As I started reading Hosea, though, I thought its purpose was to display God’s wrath — His anger with Israel… with me. He did start off pretty ticked. He said things like,

But then, in the midst of this dramatic metaphor, God says about those of us chasing other loves,

Therefore, behold, I will allure her, and bring her into the wilderness, and speak tenderly to her. And there I will give her her vineyards and make the Valley of Achor a door of hope. And there she shall answer as in the days of her youth, as at the time when she came out of the land of Egypt. And in that day, declares the Lord, you will call Me “My Husband,” and no longer will you call Me “My Baal.” For I will remove the names of the Baals from her mouth, and they shall be remembered by name no more. — Hosea 2:14-17

Every time I sit by the banks of my sin and my other loves, right as I think He is about to wipe me out because my heart feels so out of control, He steps into the river and redirects it.

The king’s heart is a stream of water in the hand of the Lord; He turns it wherever He will. — Proverbs 21:1

It is only God who moves my heart. He chases me down and lures me back to Him; while I am running to everyone else, He runs after me. God brings me back to the place where it fares well with me, reminding me He is my Husband. There is no spinning, no fear, only perfect acceptance and peace.

I can let other people down. If God is for me… the God of the universe for me… who could be against me? Whom else do I fear?

When God became real to me in high school, I came home from the crosses at camp and gathered an assortment of younger girls so we could talk about Him. I don’t remember thinking I was supposed to do that. After I fell in love with God and was filled with His Spirit, I just did it. I started gushingly teaching everything I knew about Him. I’ve lived since then with a very clear sense of what He wants me to do, and usually it’s to talk about Him in some form.

His gifts in my life were never a secret to me or those who saw them used. As He did with every believer, He gave me something to make Him bigger. When I would speak or even write, I was on display — and being on display would at times make me physically ill.

I simply could not handle people’s invisible thoughts about me, or at times their very visible criticism. I dreaded it more than facing God and telling Him that I had sat on every gift He had given me. So I would teach, but I always held back. I always kept the pulse of how I was being received, and I agonized to the point of paralysis when it was negative. I was like a politician worried about the polls.

Rather than dying to my need for approval, I died to the clear callings God had put in my soul and the clear gifts and equipping He had given me.

I just wished it all away… it was costing too much. It was costing me my people, everyone’s approval, the thing I loved most. So I sat on it. The little portion of His work that God gave me to do for a few years before I see Him again, I sat on, praying it would go away. I was no different than Jonah running from God’s clear call to share Him with Nineveh. I was not going. I’m thankful He didn’t have me eaten by a whale.

I did wonder sometimes, when I closed my eyes and let it get scary quiet, if I was missing the best things, the things that matter most, because I was afraid.

He knows we keep chasing other loves until we love Him most. We keep spinning. We keep searching, restless. We keep missing all He has for us. He’ll always feel far away, drowned out by other louder rivers, until every other thing fades away and He becomes the only thing.

Watch this Video for Anything

Excerpted with permission from Anything by Jennie Allen, copyright Thomas Nelson.

Is God your only thing? Whose approval do you need to abandon to live fully for God alone? Share your thoughts and comments about abandoning approval of others on our blog! We’d love to hear from you! ~ Devotionals Daily