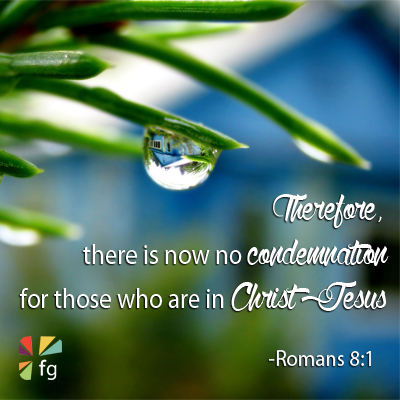 I was barely seventeen when I sat in the waiting room of an abortion clinic.

No one knew I was pregnant, except my boyfriend and a coworker who had recommended the clinic. I was prochoice by default of the fact that my parents were pro-choice, so this decision had been a no-brainer. I was a junior in high school, popular among my peers, and on the varsity cheerleading squad. I had aspirations to attend college after graduation.

A baby certainly wouldn’t fit within those plans.

My boyfriend seemed to struggle more with the decision than I did, finding it difficult to reconcile this choice with his Catholic upbringing. However, he agreed there was no other practical solution. He was a graduating senior and had been awarded an athletic scholarship at a nearby university. We called the clinic and felt relieved when a date was on the calendar.

My boyfriend normally drove me to school, so my parents didn’t suspect a thing when he pulled into the driveway on that morning in November. Little was said during the twenty-mile drive to the clinic on the outskirts of town. He seemed to be focused on the directions to make sure that we didn’t get lost. I fumbled with the radio, looking for anything to distract me from thinking about the procedure. I couldn’t bring myself to say the word—even in my mind. Finally we arrived at the clinic. As we entered the waiting room, I noticed several other girls who appeared to be close to my age, some alone and a few with their boyfriends. There was another girl who was clearly much younger, sitting stoically next to her mother. I wondered for a moment about their stories.

I checked in at the window and was immediately handed a mound of paperwork. My boyfriend settled the bill, paying $250 in cash. After filling out the required forms, we passed the time by playing hangman and tic-tac-toe on a scratch sheet of paper. The time spent in the waiting room seemed like an eternity when, in actuality, it was less than a half hour.

I was startled when the nurse standing in the doorway called my name. I stood and briefly looked back at my boyfriend. He gave me a gentle nod of reassurance as I walked toward the nurse. I didn’t look back again as I walked through the doorway and was ushered down a narrow corridor. After a blood test and a brief meeting with a nurse to confirm my decision to move forward with the procedure, I was led into a cold and sterile room. The details after that are a blur, gray and devoid of detail. A brief introduction by a doctor in a white lab coat. A friendly nurse who held my hand as the anesthesia was administered. And then nothing.

My next memory is of waking up in a larger room with many beds, each closed off by curtains. I was alone for a few minutes until a nurse came to my side and informed me that I was in recovery. The nurse asked me if I had brought anyone with me and if I would like that person to join me in the recovery room. I nodded my head and softly gave my boyfriend’s name. I was not in any pain, but my mind was racing.

I began to cry softly. I didn’t want to call attention to myself, so I tried to muffle my sobs by turning my head into my pillow. I had thought I would feel nothing but sheer relief, so the tears caught me off guard.

When I looked up, my boyfriend was at my side. He seemed uncertain about how to respond to my sadness. He fidgeted nervously and leaned down and whispered, “We’ll be out of here soon.” His words brought little comfort, and I remember just wanting my mother. I was seventeen years old, and I needed my mother. But my mother didn’t know. We had agreed not to tell anyone. In fact, we agreed to never mention the procedure or acknowledge this day again.

Unfortunately, moving on wasn’t as easy as I had imagined. In spite of being very pro-choice at the time, I couldn’t seem to reconcile the guilt that would plague me from time to time when the memory resurfaced.

Four years later I would lay that sin at the foot of the cross, desperate for God’s mercy and forgiveness. While my sin list was a long one, the abortion was at the top when it came to my most grievous sins. It played a huge part in driving me to the cross and admitting my need for a Savior. The abortion was foremost in my mind that evening when I bowed my head and gave up the chase. I welcomed this forgiveness and new life that were being offered. If God could forgive me, then maybe, just maybe, I could forgive myself.

I felt a tremendous weight had been lifted off me when I laid that burden down. The feeling was indescribable. In that moment I understood what it meant to share the good news of God’s love and forgiveness. I was on the receiving end of that good news and couldn’t wait to share it with others. Only one problem: I quickly discovered that God’s people weren’t as willing to talk about their own messy moments when they encountered God’s redemptive grace. Those moments were always referenced in second- or third-person: you, he, she, his, her, they, their. But never in first person. When talking about the messiness of life and faith, words like I, me, and my were often far too personal and revealing.

Picking It Back Up

Shortly after becoming a Christian, I was in my new college Sunday school class when the topic of abortion came up. “Abortion is murder,” chimed one girl in a Laura Ashley puff-sleeved dress with matching hair bow—the standard Sunday-morning uniform for an eighties college girl in the Bible Belt. Her comment was met with a chorus of nods and affirmations by most of the other girls in our group. Another girl piled on, “I mean, if it’s murder, the women having them should do jail time.” And that was the moment I made the decision to never, never, ever speak in detail about my past.

God may have set me free, but His people were ready to lock me up.

After a while I began to notice a pattern when the topic of abortion would come up. Finger-pointing and judgments flowed freely with little concern that people’s words might apply to anyone in their group. And why would they? The underlying assumption was that no one in the church would do such a thing. Even those of us who arrived a little late to the party. It was those other people – them. As a new believer I desperately wanted to fit in with my new family – my brothers and sisters in Christ – which meant I was left with one option when it came to dealing with and healing from my past sin of abortion (and other sins on the list, I might add): get a Laura Ashley puff-sleeved dress and shut my mouth.

As a bonus, I would also buy a matching quilted Bible cover. That would throw them off. At least for a while.

Out of the Darkness

I was a new bride of about a month when I dumped the news of my past abortion on my husband. I don’t recall what precipitated the decision to come clean with him, but I’m sure it was the result of pressure building up from the guilt I had carried alone for so many years. There was a crack in the dam that night and, bless his heart, he had little warning of the impending flood to come. He knew I wasn’t a virgin when we married, but I didn’t give him much detail beyond that.

I came very close to telling him on several occasions during our engagement, but I always chickened out. I was tormented by the fact that he didn’t know everything, but I was desperately afraid I might lose him. He had saved himself for a quarter of a century, and I already felt like he was getting the short end of the stick in marrying the non-virgin girl. I clearly didn’t give him enough credit because when I burst into tears and told him one month into our marriage, he wrapped his arms around me and said, “You’re forgiven.” And he meant it. Unfortunately, we wouldn’t talk about it again until seven years later, when we found ourselves sitting next to each other in a counselor’s office.

We landed in that counselor’s office due to some other issues, but the abortion came up early in our sessions. I confessed that I didn’t feel like my puritan husband deserved a wife with such a tainted past and he was only sticking around because he had to. Once we worked through that pain and my husband reassured me that was not the case, I began to take steps toward healing from the shame of the abortion.

I was finally free to talk about it with my very best friend. And, in his defense, he would have talked about it sooner, but I had made it clear that it was off-limits after the original confession.

That day in the counselor’s office, talking about the abortion felt like I had crept up to the attic of my soul and carried out the dusty lockbox containing my shameful secret. I brought it out of the darkness and exposed it to the light.

I was no longer content to allow my unclaimed baggage to remain on the carousel of shame for another day. With the help and encouragement of my counselor and with my husband by my side, I turned the key on the dusty lockbox and slowly opened the lid. For several weeks we unpacked that lockbox of sin and shame. For the first time, I recounted the details of that day. I laid my soul bare, and I held nothing back. I mourned the loss of life – what was to be my first child. I wept over the fact that a young seventeen-year-old girl had to make the decision virtually alone, and even worse, she had to hide the aftermath of grief that followed. I grieved every harsh and judgmental word that had been spoken by my very own brothers and sisters in Christ and the pressure I had felt to continue hiding the sin in spite of the fact that Christ had set me free. I grieved the collateral damage it had indirectly had on my family in my refusal to address the sin and accept God’s forgiveness.

Every step of the way, God met me in my grief.

Excerpted with permission from Move On: When Mercy Meets Your Mess by Vicki Courtney, copyright Thomas Nelson, 2014.

Do you relate to Vicki’s story of hiding in shame over a past sin that’s already been forgiven by God? Have you felt trapped into silence by the judgment that you knew would come from Church friends and family? How about letting that burden go today and shining the light on that dark, scary place? Jesus came to set you FREE! Come join the conversation on our blog! We would love to hear from you! 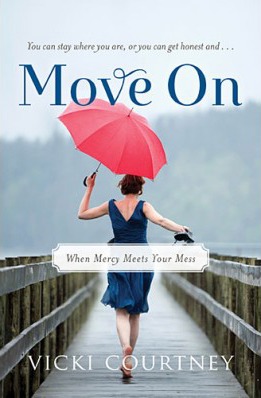 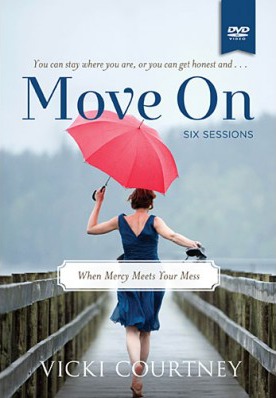 Buy the "Move On" DVD 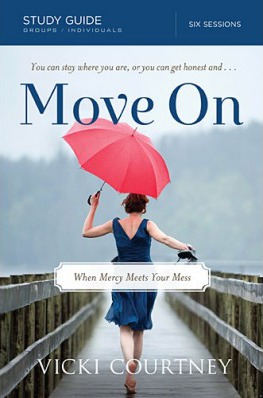