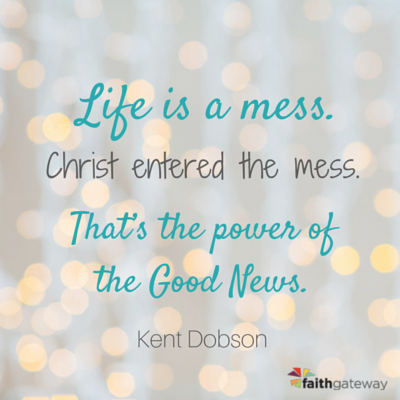 Advent is a strange time of year.

This time of year we keep reminding one another that the real meaning of Christmas is not found at the mall. Then we go the mall anyway. We go to Walmart and then tweet about keeping Christ in Christmas.

It’s seems like we’re unsure of how to fit Jesus into all this mess.

When John begins his Gospel, he starts in a cosmic place, with the creation of all that is, saying the logos (word) was God and brought the world into being (see John 1:1). From a Jewish point of view, the logos might have been understood as the divine wisdom of God, the word of God, even possibly the torah, or law, of God. In other words, wisdom (the wisdom of God) brought the world into being; God’s word ordered all that is. This perspective was not unique to John.

From a Greek point of view, John was swimming in philosophical and poetic waters. Logos was understood to the Greeks as something like reason, logic, order, wisdom, meaning, and intelligence. Plato would have agreed that the logos brought all that is into being. Then he may have yawned after the first line and stopped reading.

But John is just getting warmed up. His argument takes a most radical and unexpected turn. He says the logos became sarx, or flesh (see John 1:14). Sarx was a crude term, a crass way of referring to the body. John was saying that the logos, the divine wisdom, the word, reason, et al, became gritty, and grimy, and human. John said the person, the living flesh of a Man named Jesus, has something to do with the divine order that holds all things together.

John is saying clearly that we cannot separate the divine from the physical, the spiritual from the messy.

The belief in this type of separation, known as Gnosticism in the ancient world, was starting to dominate certain Christian circles in John’s day. This concept of separation still creeps up in our language and practice today. It’s understandable why. Even today we wonder why God would want anything to do with the messy world we inhabit.

But God does inhabit the mess. We may prefer a pretty little manger scene, pristine and glowing, with wise men dressed in costumes, and college guys with pathetic beards, to an actual stinking barn. But that’s not how the story goes. And we may not like the story as it is because it’s a messy story with a pregnant teenager, a dirty barn, and isolation, and exclusion. We would like the story cleaner. We would like God somewhere else.

It seems to me that we need more sarx. We need to know that God is with us. We need more Good News and light in the messiness of this time of year. It is not possible to always remain before the pristine manger scene in our cultural imaginations. It’s not possible to attend the church pageant and convince ourselves that we kept Christ in Christmas. We are likely to go to the pageant and yell at our kids all the way home.

Life is a mess. But Christ entered the mess. That’s the power of the Good News.

And if that’s not enough, Paul takes it one step further saying, “you are the Body of Christ.” Something of the sarx, the “fleshiness” of Christ, is still walking around in the Body of the Church.

Maybe we need more sarx, more incarnation, more word becoming flesh — at Walmart, in the car, at the pageant, at the staff party, in the mess.

May you be a little more light in this world.

May you be a little more Christ in this world.

May something of the logos of God made sarx, now living again in the Body of Christ be embodied your home, in your family, at the mall, in church, in all, as Christ is in all.

The way to keep Christ in Christmas is to be the Body of Christ right now.

Christ in the mess is the Good News! What wonderful, gorgeous, glorious news to a weary world in the middle of so much mess! What mess are you in right now? What are your circumstances of pain, worry, need, and distress? Christ is in those messes with you. Come join the conversation on our blog! We would love to hear from you!