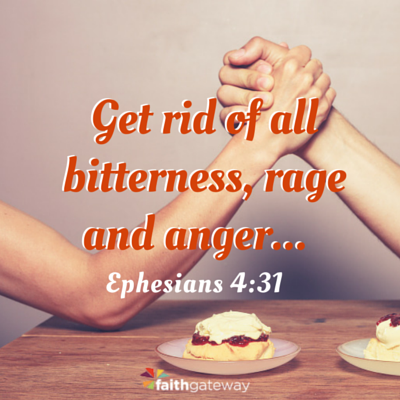 As churning cream produces butter, and as twisting the nose produces blood, so stirring up anger produces strife. — Proverbs 30:33

Earlier this year, a friend of mine made me really mad. Crazy mad. I felt small and scared and out of control, and like my friend was making decision after decision to hurt me. Every time I heard from her or about her, it hurt. It was like there was sharp glass on her hands and every time she got near me, she cut me, even if she swore she didn’t mean to.

For a while, it brought me so much joy to be angry with her. I exhausted myself imagining the same conversation again and again, but slightly different each time, saying clever things and finding loopholes in her lame arguments. I was the captain of the debate team in my mind, and I was very busy debating her.

I kept thinking about her, and the anger and the venom were starting to feel familiar. When I thought about what happened, the muscles in my neck and back scrunched up, and I felt bad at the base of my skull. Then it got harder to breathe, and it felt like something was rotting inside me, the way something goes bad in the refrigerator.

Have you ever found joy in being angry? Do you ever stir up anger in yourself? How does it end up affecting you?

My Anger Hurts Me

Get rid of all bitterness, rage and anger, brawling and slander, along with every form of malice. — Ephesians 4:31

My friend Sarah asked me how I was doing one night. “Well,” I said, “it’s been pretty hard lately with my friend at whom I am very angry.”

“Oh,” she said. “When did you talk to her?” I rolled my eyes and puffed out my breath like I was a seventh grade girl. I didn’t talk to her. Was she crazy? “I, um, I actually didn’t talk with her at all. I mean, it’s been hard… in my head.”

Gently, kindly, she paused, waiting for me to realize what I just said. I had been spending hours in imaginary conversations, tying myself up in knots, harboring secret fantasies of this person falling down in public, planning out elaborate comebacks I should have said months ago.

When I told Sarah that things had been hard in my head, I realized that I’m the only one suffering right now.

My anger doesn’t hurt the person at whom I am very angry, but it hurts me. [tweet this]

My friend is doing great, I think, but I stagger around in a fog of anger and clenched jaws and fists, waiting for a showdown that will never come and an apology that will never be offered.

It can seem impossible sometimes to get rid of anger. Are you waiting for a showdown or an apology that will never come? If so, how is that affecting you?

I love this mix of hot and cold, and the herbs totally make it. Sometimes for a lunch party I’ll serve this salad with spicy peanut noodles and chicken thighs on skewers — fresh, bright, flavorful.

Mix the dressing in a jelly jar. Combine the vegetables and toss with half the salad dressing. Arrange on a large platter. Cook the steak, allow to rest for 10 minutes, then slice thinly and place on top of vegetables. Pour remaining dressing over the top, and scatter herbs over the whole platter.

Excerpted with permission from Savor: Living Abundantly Where You Are, As You Are by Shauna Niequest, copyright Zondervan.

Are you nursing anger and kind of enjoying it? Who is it hurting? Whom do you need to forgive? Take some time today to ask the Lord to help you let the hurt and anger go so you can be free of it! Join the conversation on our blog! We want to hear from you! ~ Devotionals Daily