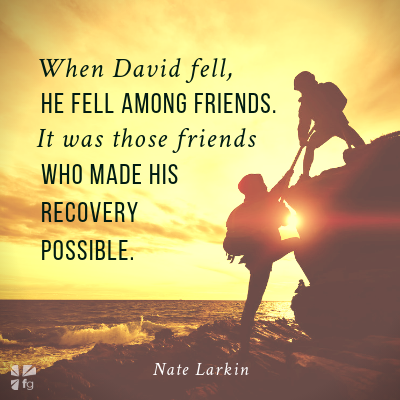 Editor’s Note: In the past few years, we’ve unfortunately witnessed quite a large number of men succumb to very public failures . . . from leaders in business, politics, entertainment and yes—even the church. But there is still great hope for these men, even after the collapse. Nate Larkin is living proof of that. Through his work with the Samson Society and his powerful book Samson and the Pirate Monks, Larkin offers a blueprint both for recovering from the collapse and for guarding against it in the first place. To whatever degree you’ve experienced failure in your own life, we hope this excerpt reminds you that failure is not final . . . and that you weren’t meant to journey alone.

Samson and David—two great men, two great failures. But after they failed, the lives of these two men moved in opposite directions. Samson spent his last years alone, in bondage and blindness, and he died a failure. David, on the other hand, recovered. His collapse was a bitter experience, but he emerged from it a wiser man and a better king. David died a success, surrounded by friends and family, and he left a legacy.

Why the difference? Why did one man recover while the other man did not?

What things am I talking about? Well, consider with me these distinctions between the two men:

Distinction One: Isolation vs. Companionship

The Bible is a storybook, a stirring saga of love and war, tragedy and triumph. What makes this story so compelling, so enduring, is that it is true. The characters in the Bible are real people, and the Bible describes their strengths and weaknesses with unflinching honesty.

Samson is a major biblical figure. His life spans four entire chapters in the book of Judges, and he dominates every scene in which he appears. Samson’s performances are so strong that the typical reader doesn’t notice the utter absence of a supporting cast until someone points it out. Samson was a man who never bothered to make friends. Aside from his parents, the Bible gives us the name of only one person who ever got close to him: Delilah.

In this respect, David’s life was markedly different, but it did not start out that way. David was a precocious child, so competent and self-sufficient that his father soon sent him into the fields alone to guard the flocks that comprised the family fortune. There, far away from the bickering of his older brothers, David found peace. His only audience was God. Beneath the open sky, he could sing at the top of his lungs. In glorious solitude he could spend hours in target practice without a word of correction or ridicule. True, the idyllic life turned monotonous at times, and the tedium was occasionally punctuated by moments of sheer terror. But David grew to believe that with God’s help he could defeat any threat single-handedly.

It was really Jonathan who made the famous friendship possible. Its formation defied political logic. As the oldest son of the current king, Jonathan was the rightful heir to the throne. Nobody would have criticized him for identifying the handsome young giant-killer as his greatest rival, a threat to be contained and neutralized. But when they met, Jonathan did a remarkable thing. The Bible says that the prince took off his armor and belt (his personal defenses) and gave them to David. Then he took his offensive weapons, his sword and his bow things David could hurt him with—and he gave those to David too. Having made himself completely vulnerable, Jonathan offered his hand to David in friendship. They formed a covenant that day—a pact that saved David’s life on more than one occasion, a promise that outlived them both.

His friendship with Jonathan set a new pattern for David’s life. Having made one friend, he went on to make hundreds more. “Every man who was desperate, in debt, or discontented,” the Bible says, “rallied around him, and he became their leader” (1 Sam. 22:2). The names and descriptions of David’s friends go on for pages. While King Saul, consumed by jealousy and paranoia, was raging against his advisors and driving his best warriors away, David befriended the weak and the strong. He eventually counted among his most trusted friends men whose military exploits were even greater than his own. David surrounded himself with giant-killers, and he learned to listen to them. Together, he and his friends accomplished what no one man could have done.

When Samson fell, he fell alone, surrounded only by enemies.

When David fell, he fell among friends. It was those friends, especially one courageous, godly man named Nathan, who made his recovery possible.

The book of Judges portrays Samson as a man perpetually on the move. Never one to waste time sitting at home, Samson relished the freedom and anonymity of the road. Closed doors and locked gates could not contain him. He preferred the easy company of strangers to the suffocating sameness of family and friends. Samson always kept an eye on the exits, and he came and went as he pleased. In scene after scene we see him traveling far from the beaten path, usually somewhere in enemy territory, always alone.

In his post-Jonathan days, David was different. While he did travel at times—like most of us, he could scarcely avoid it—only rarely did he travel by himself. In road scenes we usually see David at the head of a throng or within a cluster of fellow travelers.

When he was given the choice between heath and hearth, David generally preferred to stay home. The first thing he did after establishing Jerusalem was to build a house for himself there, a fine, comfortable house suitable for raising a family and entertaining friends. In fact, David was home, relaxing on his own rooftop patio, on the day he fell.

Samson was far away from home when his world collapsed. When the cold, hard chains encircled him and the darkness fell, Samson didn’t call out for help, because he knew there was no one within earshot who cared.

Samson believed his only security was in strength. He didn’t like to show weakness—not to God, not to other people, not even to himself.

David was invariably honest with God, and he was usually honest with those around him. Though he was committed to self-examination, he knew that he would never discover the darker hollows of his heart without the help of God and others.

Excerpted with permission from Samson and the Pirate Monks by Nate Larkin, copyright Nate Larkin.

Do you have friends in your life who can help you ward off collapse? Friends with whom you can “lay down your armor” and become vulnerable with? If not, the book Samson and the Pirate Monks offers a path to help you get there… as does the website for the group outlined within its pages — SamsonSociety.com. We’d love to hear what friendship and vulnerability look like in your life. Come share with us in the comments!