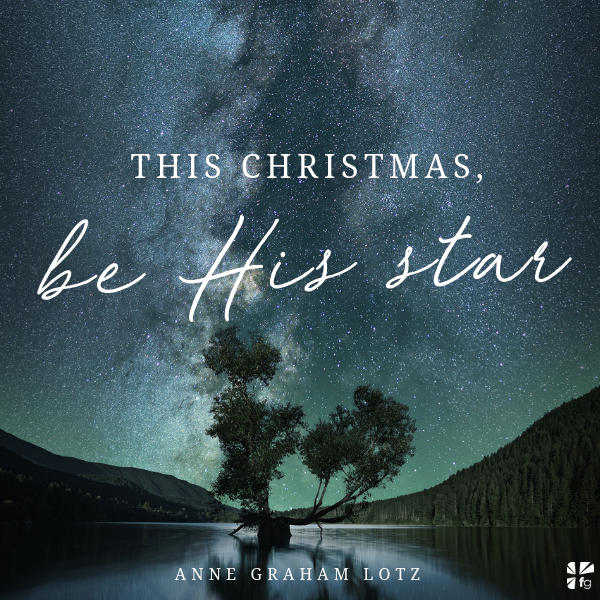 Look at the Star

They went on their way, and the star they had seen in the east went ahead of them until it stopped over the place where the Child was. When they saw the star, they were overjoyed— Matthew 2:9-10

Our senses are bombarded 24/7 by sounds and sights, especially during the Christmas season. Marketing companies compete, all trying to get our attention. They spend millions for what they’re selling and promoting, not to mention holiday parties, church programs, and school plays.

I wonder what I would have used to get the world to look at a tiny baby in a manger. How would I have drawn attention to an obscure stable behind some inn in an obscure Judean town?

When God wanted to get the attention of the nations of the world, He used a star. When the Magi came from the east to Jerusalem, they asked,

Where is the one who has been born King of the Jews? We saw His star in the east and have come to worship Him. — Matthew 2:2

This Christmas, be His star! Ask God to use you to draw the attention of others to the Baby in the manger.

This is how God showed His love among us: He sent His one and only Son into the world that we might live through Him. — 1 John 4:9

Do you think there is more than one way to God? Have you bought into popular opinion that seems to think you can pick and choose your religion — even make one up to suit yourself ? If this is the way you’re thinking, heed the words in 1 Timothy 2:5:

There is one God and one mediator between God and men, the man Christ Jesus.

The politically correct say Jesus was a good man, a well-meaning prophet, even a revolutionary! But the Bible says He is the only Mediator between God and man:

There is no other name under Heaven given to men by which we must be saved. — Acts 4:12

Don’t allow political correctness to rob you of a relationship with the one true God. This Christmas season give God a gift He wants. Tell someone how to come to Him… through Jesus.

There’s no better time to share your faith in Jesus Christ, to be a star for Him than today. The story of His birth is everywhere you go — decorations at the mall, lights in trees and on houses. You can’t miss Him! What better time to talk about Him with someone who hasn’t met Him yet? Who will you introduce to Jesus? Come tell us on our blog. We want to know! ~ Devotionals Daily