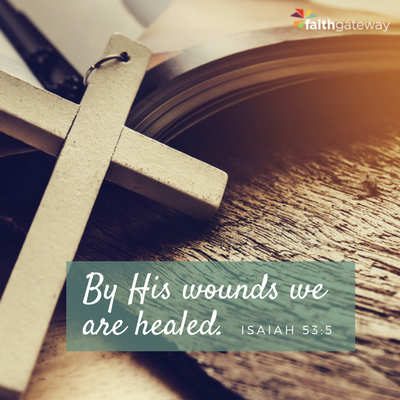 Editor’s Note: We have been so blessed to feature much of Billy Graham’s writing in Devotionals Daily over the last five years, and this season we can’t think of Holy Week without remembering him and his legacy. He had a lot to say over the years about Christ’s death and resurrection — what he has called the two “most important events in human history.” Billy Graham dedicated his life to bringing people into the Kingdom of Heaven and sharing God’s love for us through His ultimate sacrifice. We hope you are encouraged by these devotionals and share them with your friends who have yet to meet Jesus!

He was pierced for our transgressions, He was crushed for our iniquities; the punishment that brought us peace was upon Him, and by His wounds we are healed. — Isaiah 53:5 (NIV)

Flogged… Bits of glass and rocks shredded the flesh of His back…. Crucified… Nailed to the rough wood of the cross and left hanging there to experience the excruciating pain of death by suffocation…

Why did Jesus willingly die such a violent death? The Bible says He went to the cross for one reason: to become the final and complete sacrifice for our sins. Each of us has sinned; each of us is guilty before God; each of us deserves to die. God is holy and just, and sin must be punished.

But Christ became our substitute; He died in our place. He was without sin, but all our sins were placed on Him, and He willingly took the punishment and death we deserve.

Christ died for sins once for all, the Righteous for the unrighteous, that He might bring us to God. —1 Peter 3:18 (AMP).

Christ died for you! Why did He do this? He did it because He loves you, and He wants you to spend eternity with Him in Heaven. Have you responded to His love?

When Jesus was put to death, He truly died. The Roman soldiers who nailed Him to the cross attested to that fact when they took His body down and placed it in a tomb. Its entrance was sealed with a huge stone and placed under guard. But that was not the end of the story…

Two days later the tomb was empty, and shortly afterward Jesus appeared numerous times to His followers — as many as five hundred on one occasion. His resurrection proved that Jesus was who He claimed to be, the Son of God, sent from Heaven to save us from our sins. But it also proved for all time that there is life after death, and that we will go to be with Him in Heaven forever if we know Him.

Is your hope in Christ — both for this life and the life to come?

Excerpted with permission from Wisdom for Each Day by Billy Graham.

This week, Holy Week, as we meditate on the Cross and Jesus’ incomprehensible sacrifice, how are you responding? The violence our Jesus experienced in His flesh was just a taste of what was to come for Him in hell… All for us. Come share with us on our blog. We want to hear from you! ~ Devotionals Daily