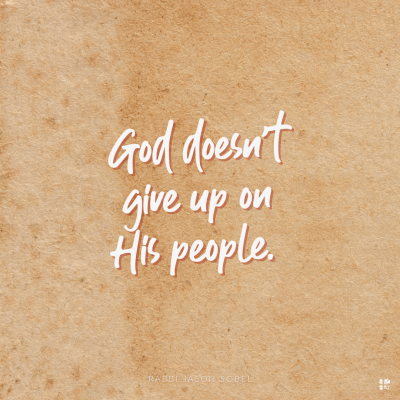 Everything in Scripture was written for the sake of the Messiah. The book of Ruth is no exception. It provides not only the backstory for the birth of King David but also many deeper revelations and allusions to the Messiah.

One of the seemingly subtle but deeply significant allusions to the person and work of the Messiah is found in Ruth 2:14:

At mealtime Boaz said to her, “Come over here and eat some bread and dip your piece [“small morsel” in Hebrew] into the wine vinegar.” So she sat beside the harvesters and he held out to her roasted grain. She ate until she was full, and some was still left.

Boaz’s dialogue with Ruth seems very wordy given the fact that Ruth was a foreign woman whom he had just met. The amount of detail also seems to be a bit too mundane and even uncharacteristic of Boaz. Would Boaz, after being so generous to Ruth, really just offer her a tiny morsel of bread? Something deeper must be implied. Rabbinic commentators see Boaz’s words to Ruth as prophetic allusions to important events that would occur in the life of her future descendants.

The first way that commentators prophetically interpret Boaz’s statements is by connecting them to King David:

“When it was time to eat, Boaz said to her, ‘Come over here (halom).’”… R. Elazar said: [By using the word halom he gave her a prophetically inspired hint], telling her in effect: The royal house of David will descend from you. [Ruth was the great-grandmother of David.]… Halom is also used in reference to David, for it says, “Then King David came and sat before God, and he said, ‘What am I O Lord God, and what is my family, that You have brought me halom, to this point (2 Samuel 7:18).’” [Halom thus refers to both Ruth and David.]1

King David was a type and shadow of the Messiah. The events in his life were meant to point to the Messiah, the ultimate Son of David. Thus, the life of Jesus would mirror the life of David in many important ways. This connection is powerfully seen by the way the rabbis connect Ruth 2:14 as speaking prophetically both about King David and the Messiah.

When Boaz said to Ruth, “Come over here,” he was actually alluding, on a prophetic level, to Ruth’s future descendant, King Messiah, who would establish the messianic Kingdom. The phrase “coming near” is important in Jewish thought. It has been interpreted by the rabbis as “come/draw near to the Kingdom.”2 The foundation of Old Testament worship was the offering of sacrifices. The Hebrew word for “sacrifice” is korban, which is derived from the Hebrew root karav, meaning “to draw near.” Sin creates separation, but a sacrifice draws one near to the Lord. The Messiah, Jesus from a New Testament perspective, would offer His life as a sacrifice (korban) to draw us close (merkarev) to the Lord. This was the primary mission of Jesus and His ministry — to draw near and cause us to come closer to God:

But now in Messiah Yeshua, you who once were far off have been brought near by the blood of the Messiah. . . . And He came and proclaimed shalom to you who were far away and shalom to those who were near. — Ephesians 2:13, Ephesians 2:17, emphasis added

On the last and greatest day of the Feast, Yeshua stood up and cried out loudly,

If anyone is thirsty, let him come to Me and drink. — John 7:373, emphasis added

Boaz’s invitation for Ruth to “eat some bread” (Ruth 2:14) alludes to “bread in the kingdom” (Luke 14:15). The Messiah, like Moses, would provide bread from Heaven and would actually be “the bread of life” (John 6:35). The rabbis connect bread and kingship on the basis of 1 Kings 4:22 (NIV), which associates the royal provisions of Solomon with bread. The total amount of flour and meal mentioned (90) is the numeric value of both “bread” (lechem) and “king” (melech) in Hebrew. In the Lord’s Prayer that Jesus taught His disciples, the messianic Kingdom is significantly connected with bread:

Your kingdom come… Give us this day our daily bread. — Matthew 6:10-11, emphasis added

“Dip Your Piece into the Wine Vinegar”

After telling Ruth to “come over here,” Boaz told her, “Dip your piece into the wine vinegar” (Ruth 2:14). This points to the suffering of the Messiah:

Amazingly, the rabbis interpreted Isaiah 53 as referring to the Messiah, which some later rabbis and Jewish scholars deny.

Boaz’s request connects back to two key events in the life of Jesus. The first was the Last Supper, when Jesus spoke about the one who would betray Him:

He it is, to whom I shall give a sop, when I have dipped it And when he had dipped the sop, he gave it to Judas Iscariot, the son of Simon. — John 13:26 KJV

Both the original Greek text of John 13:26 and the Greek translation of Ruth 2:14 use the same word — psomion, which refers to food soaked in liquid before being eaten. Ruth’s dipping her morsel in the sop, which the rabbis connect to the suffering of the Messiah in Isaiah 53, was partially fulfilled when Jesus dipped the sop and gave it to Judas. Judas’s betrayal of Yeshua for thirty pieces of silver would directly lead to the Messiah’s suffering and affliction on the cross.

Ruth’s dipping her “piece into the vinegar [sop]” also alludes to the Messiah’s death on the cross:

After this, Jesus knowing that all things were now accomplished, that the scripture might be fulfilled, saith, I thirst.

Now there was set a vessel full of vinegar: and they filled a spunge with vinegar, and put it upon hyssop, and put it to his mouth.

When Jesus therefore had received the vinegar, He said, It is finished. — John 19:28-30 KJV

What Scripture was Jesus seeking to fulfill when He said, “I thirst”? Jesus, the Son of David, was fulfilling Psalm 69:22, a psalm of David, which says, “For my thirst they gave me vinegar to drink.” The Hebrew word for “vinegar” is hometz and is the same word used in Ruth 2:14 for the sop of vinegar in which Ruth dipped her bread, which clearly connects to Yeshua drinking vinegar on the cross.

The Greek word for “vinegar” is oxos and has the numeric value of 400. The Hebrew letter tav, written in the form of a cross, also equals 400, as well as the words “unto glory” from this passage: “For it was fitting for Him… in bringing many sons to glory, to perfect the originator of their salvation through sufferings” (Hebrews 2:10 NASB). The Messiah tasted the vinegar (400) of affliction both at the Last Supper, the start of His suffering, and on the cross (400), which ended His suffering, so that we might be brought to glory (400) as God’s children.

“She Sat Beside the Harvesters”

Ruth 2:14 continues with the phrase “she sat beside the harvesters.” This verse alludes to the kingship being taken from the Messiah for a time. But the key question is when.

According to the rabbis, this will occur during the end-times battle between the Messiah and Gog, the king of Magog, as the prophet Zechariah described in Zechariah 14:2. I don’t agree with the interpretation of the rabbis. I believe that kingship was taken when the majority of the leaders of the Jewish people rejected Jesus as the Messiah. This is substantiated by Isaiah 53:3-5:

He was despised and rejected by men,
a man of sorrows…
One from whom people hide their faces… Surely He has borne our griefs

and carried our pains. Yet we esteemed Him…

… afflicted.
But He was pierced because of our transgressions.

He [Moses] was assuming that his brothers understood that by his hand God was delivering them, but they did not understand. — Acts 7:25

Moses had to flee Egypt and was hidden for forty years due to being rejected by the children of Israel. In the same way, the Messiah was rejected and had to be concealed like Moses until the day Israel’s final redemption comes.

“He Held Out to Her Roasted Grain”

The kingdom of David, as a political earthly domain centered in Israel, in some real sense was taken from the Messiah Yeshua. But the good news is that it will be restored, which is the meaning of “he held out to her roasted grain” (Ruth 2:14). David’s kingship was renewed: “He will strike the land with the rod of His mouth” (Isaiah 11:4). As it was with David, so must it be with the Messiah.

A key part of Ruth and Boaz’s beautiful love story is its conclusion. Ruth’s marriage to Boaz points to the greatest fulfillment of grace and the truth of the Messiah. Boaz shows Ruth incredible grace, protection, and provision.

Likewise, the Messiah, when we trust fully in Him, gives us a vast amount of grace, protection, and provision. The key is looking forward, not backward, to the promises of Messiah and to what He can do in your life.

Ruth is a perfect example of someone who wasn’t everything the world thinks is ideal. Ruth was destitute. She was a widow. She was a foreigner who came from a people group hated by the local community. But Ruth’s unwavering loyalty and trust opened the door not only for Gentiles to be part of the line of Yeshua but for anyone willing to set aside what they did in the past and come to Yeshua, the Messiah. Ruth opened the door for anyone who thinks they fall short of what the Messiah is looking for. This means you.

Ruth was washed, anointed, and clothed with new raiment just like we have been washed in the blood of the Lamb, anointed by the Holy Spirit, and robed in His righteousness. She’s washed. She’s anointed. She’s robed. She’s amazed.7

Ruth, the foreign widow, was amazed. You will be amazed as well when you let Yeshua have the reins of your life. You and Yeshua, like Ruth and Boaz, can travel together in a glorious story. God doesn’t give up on His people.

The Messiah is in the Bible from Genesis to Revelation. You just have to look and see! Come share your thoughts with us. We want to hear from you. ~ Devotionals Daily