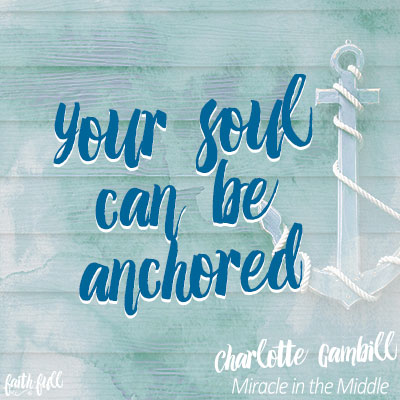 I don’t confess to know a lot about boats other than they make me seasick. Because of that, I don’t spend a lot of time on the water. However, on the few occasions that I have been out on a boat with friends, we’ve ensured before setting off that someone on the vessel was able not only to steer, but more importantly, to stabilize the boat. As much as someone needs to know how to move the boat forward, he or she also needs to know how to hold the boat steady. To that end, a seasoned sailor possesses the skill and knowledge to secure his boat with an anchor that digs into the seabed. The rule of thumb follows that the larger the vessel you sail, the bigger the anchor you will require.

When it comes to our journeys and charting the courses for our futures, we need the same approach. We need to know how to “drop anchor” into God, His Word, His promises, and His grace. All too often, it is not until we reach the middle of our journeys that we discover how anchor savvy we actually are. It is here we discover if our anchor into God is an untested theory or a living reality.

The further we venture out, the stronger the anchor we will require; and the larger the life we want to live, the deeper the anchor will need to go.

The middle moments of life are often where your anchor comes under attack. So knowing what you believe before the storm hits is crucial. What are your absolutes? What are the unchangeable truths you hold to in the midst of change? What are the commitments in the middle that will not be compromised? It is good to revise them frequently and confess them consistently.

For example, we have faced times as a family when we have felt, like the widow in Luke 21, that we had only two mites to give. But because we have an anchor about our giving, we have learned the amount is not what matters. It’s the anchor of our commitment to sow in all seasons that God is interested in. Just as Jesus saw the value of the two mites over the value of the greater amount that others gave that day, God will always see those moments in the middle where you refuse to pull up anchors because of circumstance.

In 2 Kings 4, there is a story of a woman who made some room in her home for the prophet of God to stay whenever he passed by. She had cleared some space so he could find rest when he was weary — a place to be refreshed from his ministry. Her provision of this space led to her being given a promise. The promise was that she would have a child! However, this God-fearing woman must have given up believing for a child many years before, as her response to the man of God revealed when he delivered the promise:

She pleaded with Elisha not to get her hopes up. We, too, can respond this way to the promises of God. We can become apprehensive about getting excited, in case we are later disappointed. We allow the thought of what could happen to dampen our faith for what God said will happen. This woman didn’t want to hope for a child again; she didn’t want to allow herself to become heartbroken. God is not trying to get your hopes up. He wants you to put your hope “down.”

Hope is supposed to be put down into His Word and promises.

Once your hope is down, you can give God more scope in your life. Scope is a term sailors use to describe the length of rope they attach to the anchor. The length of scope determines how far they can move from where the anchor is dropped. We need more scope in our lives. We need the type of faith that has enough rope attached to it that we can travel great distances without losing our stability and trust in God. For example, we can say we believe God is able, but scope asks us to step out in faith. We can say we are committed, but scope tests the strength of that commitment. We can say we forgive, but the offense will soon show how much scope we have attached to that anchor. The woman in 2 Kings said she believed in God, but now, through this promise, she was being asked to give God some scope to demonstrate that belief.

Once when I was young, on holiday, I went in a small, inflatable boat that was beached on the sand banks. I was happily playing, not noticing that the water had begun to rise underneath the boat. Before I knew it, I was floating in the middle of the water! I began to freak out, because even though I was in a boat that was designed to float, I barely knew how to swim! The further I drifted, the more my fear deepened, as the rising water highlighted my shallow swimming skills. The same thing happens for us with God.

The places where our faith is most tested are the spaces where we have to give God some scope.

Our challenge, then, is not to wait for the boat to drift before we learn how to swim. Don’t drown in unbelief — take the places where you fear disappointment and begin working on your belief. And give God some scope.

Watch the Miracle in the Middle Video

Excerpted with permission from Miracle in the Middle: Finding God’s Voice in the Void by Charlotte Gambill, copyright Thomas Nelson.

Do you know full well the kind of disappointment that can lead to not even wanting to hear God’s promises so that you don’t have any chance of hoping again and being heartbroken again? I do. What if that place of sorrow, fear, or exhaustion is just the middle, not the end? How much scope have you given God? How deeply are your hopes anchored in Christ? In what area of life do you need to believing Him and His promises again? Come share your thoughts on our blog. We want to hear from you! ~ Laurie McClure, Faith.Full