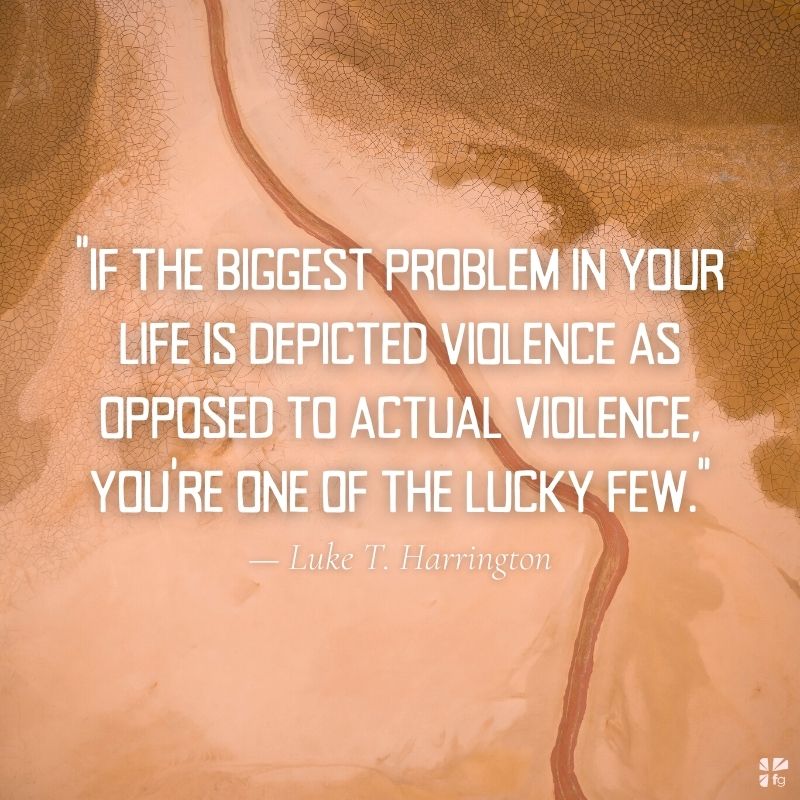 Horrific Violence, Some of It Involving Bears

In 2013, the journal Pediatrics published a study that found movies rated “PG-13” were, on average, more violent than movies rated “R.”1 The reason for this, as far as anyone can tell, is that it’s easy to make violent acts seem less violent simply by neglecting to show their consequences. If your heroes mow down rows and rows of nameless bad guys who don’t bleed, that’s “PG-13” violence; if your character gets a hole blown in his chest and slowly bleeds to death, that’s “R” violence. Level whole cities if you want, as long as we don’t have to think about the people who are now dead, maimed, or homeless.

It’s possible this is a uniquely American phenomenon. We’re generally huge fans of violence here in the States (we routinely gun each other down in the streets for fun), but sex is icky (we have sex in the streets significantly less often, which I understand is the reverse of how things are done in Europe). Culture aside, though, it makes sense that violence would creep into entertainment more easily than sex — it’s easy to draw bright lines around things like nipples and genitalia (so say my adventures in MS Paint, anyway), but it’s never quite as clear where the boundaries are with physical combat.

And, of course, how much a culture clutches its pearls at violence tends to depend entirely on how much that culture has to deal with violence. There’s violence in art and literature because there’s violence in the world; if the biggest problem in your life is depicted violence as opposed to actual violence, you’re one of the lucky few.

The Bible, for the most part, was not written by the lucky few. Many of its books were composed during dark times when violence was simply a fact of life, and the authors weren’t really interested in glossing over evil in order to appease a bourgeois audience. This chapter will look at some of the Bible’s grisliest parts — which, if you’re American, will seem like a nice reprieve from all that icky sex.

Merry Christmas! Let’s Murder a Whole City’s Worth of Babies

It’s safe to say that pretty much everyone knows the Christmas story, right? Jesus is born, in a barn, to a virgin mother (like you do); angels sing; shepherds and wise men show up; gold, frankincense, and myrrh get passed around like candy; a little boy plays a drum for some reason; and the night wind talks to little lambs, because, sure, that makes sense. Right?

Actually, the nativity story you probably think you know is cobbled together from a variety of sources. That little drummer boy originates from a 1941 carol by Katherine Kennicott Davis; “Do You Hear What I Hear?” was written in 1962 as a protest against — of all things — nuclear war.2 Even the less fanciful aspects, though — the wise men, the shepherds — come from disparate sources and are usually smashed together at random, depending on the whims of whoever’s in charge of this year’s Christmas pageant. The idyllic parade of angels, shepherds, and assorted farm animals comes from the second chapter of Luke’s gospel, while the wise men and/or magi and/or three kings come from Matthew 2, which is a whole lot… darker.

It starts out innocently enough, though:

Now after Jesus was born in Bethlehem of Judea in the days of Herod the king, behold, wise men from the east came to Jerusalem, saying, “Where is He who has been born king of the Jews? For we saw His star when it rose and have come to worship Him.” — Matthew 2:1-2

Matthew skips pretty much everything we get from Luke, including the birth itself. No shepherds, no angels, no manger — just “He was born, and then some wise guys showed up.” The wise men, by the way, were almost definitely not “three kings.” There’s no mention of there being three of them, and Matthew’s word for them is “magi,” which suggests they were priests, probably of the Zoroastrian faith.3 I’m assuming you’re not here for a lecture on Zoroastrianism, but briefly, it was one of the world’s earliest known monotheistic religions and is generally regarded to have had a strong influence on Judaism during the Jews’ Babylonian exile.

In any case, these guys show up because they saw a particularly bright star in the sky (because what could that mean other than the birth of a monarch you need to visit ASAP?), and they immediately start asking around about this whole “newborn king” situation. Specifically, they ask King Herod the Great about it, which I’m sure seems like a super idea to them, but it actually isn’t, seeing as at least half the mustache-twirling villains in the New Testament are named Herod. This one (“the Great”) is no exception:

When Herod the king heard this, he was troubled, and all Jerusalem with him. — Matthew 2:3

I used to wonder why Jerusalem itself would be “troubled” along with Herod, but when you’re ruled by a despot, his problems tend to be yours, whether you want them to be or not. In other words, there’s a deadly temper tantrum coming. Herod, after consulting his priests and scribes, directs the magi toward Bethlehem, and then adds this not-at-all-suspicious caveat:

And he sent them to Bethlehem, saying, “Go and search diligently for the Child, and when you have found Him, bring me word, that I too may come and worship Him.” — Matthew 2:8

The magi are apparently unfamiliar with the phenomenon of evil politicians trying way too hard to sound pious, because they tell Herod “Okay, sure,” and head off. So now you know the terrible truth about those adorable wise men from that crèche your mom had: they didn’t only bring a pile of gold and frankincense to baby Jesus; they practically led a murderous dictator right to His door.

Of course, there’s good news for baby Jesus in this story:

Now when they had departed, behold, an angel of the Lord appeared to Joseph in a dream and said, “Rise, take the Child and His mother, and flee to Egypt, and remain there until I tell you, for Herod is about to search for the Child, to destroy Him.” — Matthew 2:13

So Jesus and fam escape to Egypt, and everything works out. Oh, except for this:

Then Herod, when he saw that he had been tricked by the wise men, became furious, and he sent and killed all the male children in Bethlehem and in all that region who were two years old or under, according to the time that he had ascertained from the wise men. — Matthew 2:16

If you’re horrified by this, you might be reassured to know that many modern historians doubt Herod’s so-called Massacre of the Innocents actually happened. No ancient historian mentions it, and some have argued that Matthew includes it here mainly to draw an analogy between Jesus and Moses (who, as a newborn, famously escaped Pharaoh’s attempt to murder all male Israelite babies).4 That doesn’t mean Matthew was just making stuff up, though — as others have pointed out, first-century Bethlehem’s males-under-two population would have comprised, at most, twenty kids.5 Still an atrocity, to be sure, but compared to the numerous other atrocities Herod committed, it barely moves the needle6 — not the sort of thing your average historian would have felt the need to mention, even if true.7

Also, for whatever it’s worth: if you find it a bit strange that Christians callously shrug off the fact that Christ’s birth resulted in the murder of a couple dozen kiddos, you might be reassured to know that Christianity has traditionally regarded said kiddos as the “first martyrs” of the faith, celebrating them annually on December 28,8 the “Feast of the Holy Innocents (That Is, a Feast in Honor of the Holy Innocents, Not a Feast Where We Eat Holy Innocents, Because That Would Be Weird, How Weird Do You Think We Are — Okay, You Get It).” Historically, celebrations of Holy Innocents’ Day have involved children and adults switching places,9 along with smatterings of practical jokes à la April Fools’ Day.10 Kind of a strange way to mark the anniversary of a mass murder, but no stranger than most holiday celebrations are, I guess.11

The Bible is anything but a dusty old book, passé, or boring. Sex, murder, intrigue, drunkenness, miracles, explicit material, and even poop jokes (no joke). If you think it’s boring, pick it up and try it again! Come share your thoughts with us on our blog. We want to hear from you!