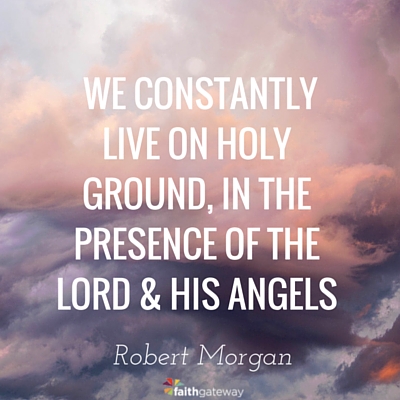 What does the Bible say about the origin of angels?

We mustn’t think of angels yet as genies or errand boys who fly to our aid at every daily dilemma. The Bible provides a balanced perspective, and it’s helpful to look at angels as Scripture does. What does the Bible say about the origin and occupation of angels?

Angels appear early in the Bible. Both the Old and New Testaments begin with angelic appearances right off the bat. The first angel in Scripture appeared in Genesis 3, guarding the path to the Tree of Life. In the Gospels, we encounter an angel before finishing the first chapter of the first Gospel — an angel appeared to Joseph in a dream, advising him to take Mary as his wife (Matthew 1:20).

What is the occupation of angels?

Angels exist to do God’s bidding. Perhaps the best Old Testament verses about angels are Psalm 103:20-21:

Notice the fourfold way angels are described: His angels, mighty ones, heavenly hosts, and His servants. Notice their threefold commitment to fulfill His bidding, His word, and His will. And don’t miss the beginning of the verse: they are commanded to actively praise Him, to bless the Lord.

How do angels travel?

One of the most fascinating Bible texts about angels occurs when the patriarch Jacob stops to rest in Genesis 28. He was trekking through the desert when the sun descended behind the western dunes, and he found a stone to use as a pillow. That night, Jacob dreamed of an immense staircase from heaven to earth. The angels of God were traveling back and forth, ascending and descending. As hymnist Fanny Crosby put it, “Angels descending bring from above echoes of mercy, whispers of love.”

When he woke from his dream, Jacob was overwhelmed. “Surely the lord is in this place,” he said, “and I was not aware of it… How awesome is this place! This is none other than the house of God; this is the gate of Heaven” (Genesis 28:16-17). Science fiction writers often speak of a wormhole — a theoretical passageway or shortcut — in space. I don’t know about wormholes, but Genesis 28 teaches that there are gateways between Heaven and earth, and angels are constantly coming and going.

As we visualize the scene, we’re prone to see it in slow motion: angels gracefully gliding up and down the stairs like hot air balloons rising and descending. But angels can also move quickly. In Daniel 9:21, the angel Gabriel was sent from Heaven with a message, and he came “in swift flight.”

How astounding to realize that we constantly live on holy ground, in the presence of the Lord and His angels.

Look around right now. You can repeat Jacob’s words as your own: “Surely the Lord is in this place, and I did not realize it. How awesome!” Whether you’re reading this in your living room, at your bedside, on an airplane, or in a hospital or jail, you’re on holy ground if Christ is your Lord and Savior.

Do angelic armies surround us?

The demonic forces around us are more pervasive and persuasive than we know, but those for us are greater than those against us. A powerful throng of angels keeps an unseen vigil, and we can say with Martin Luther: “And though this world, with devils filled, should threaten to undo us, we will not fear, for God hath willed His truth to triumph through us.”1

In 2 Kings 6, the prophet Elisha incurred the fury of the king of Syria, who sent forces to capture him. One night while Elisha was sleeping in the town of Dothan, the Syrian army silently surrounded and sealed off the city. In the morning, Elisha’s servant rose, saw they were trapped, and ran to the prophet crying, “Alas, my master! What shall we do?” (2 Kings 6:15)

The prophet was calm. “Don’t be afraid,” he said. “Those who are with us are more than those who are with them.” Elisha offered a simple prayer: “Lord, open his eyes so he may see.” For a passing moment, the servant received enhanced eyesight that allowed him to view the unseen realm.

He looked and saw the hills full of horses and chariots of fire all around Elisha. — 2 Kings 6:16-17

Whatever our situation, we have an invisible army of powerful agents surrounding us and guarding us. We can say with the writer of Psalm 27:

The Lord is my light and my salvation; whom shall I fear? The lord is the strength of my life; of whom shall I be afraid?… Though an army may encamp against me, my heart shall not fear. — Psalm 27: 1, Psalm 27:3

We aren’t fitted with special-vision goggles allowing us to see the army of angels patrolling the world or surrounding the saints. Our human ears cannot hear the trumpet blasts, the clashing of swords, or the thundering of the troops. But the Bible leaves no doubt:

The angel of the Lord encamps all around those who fear Him, and delivers them. — Psalm 34:7

Which of the monarchs of the earth

Encircled from our second birth

With all the heavenly powers?

Sent by the King of kings,

Rejoice to bear us in their hands

And shade us with their wings.

From Martin Luther’s hymn “A Mighty Fortress Is Our God,” written in 1529 and translated from German by Frederic H. Hedge in 1853.

Watch the Video for The Angel Answer Book

What questions do you have about angels? Do you feel surrounded and protected by God through His army of angels? We would love to hear from you on our blog! Come share your comments with us. ~ Devotionals Daily