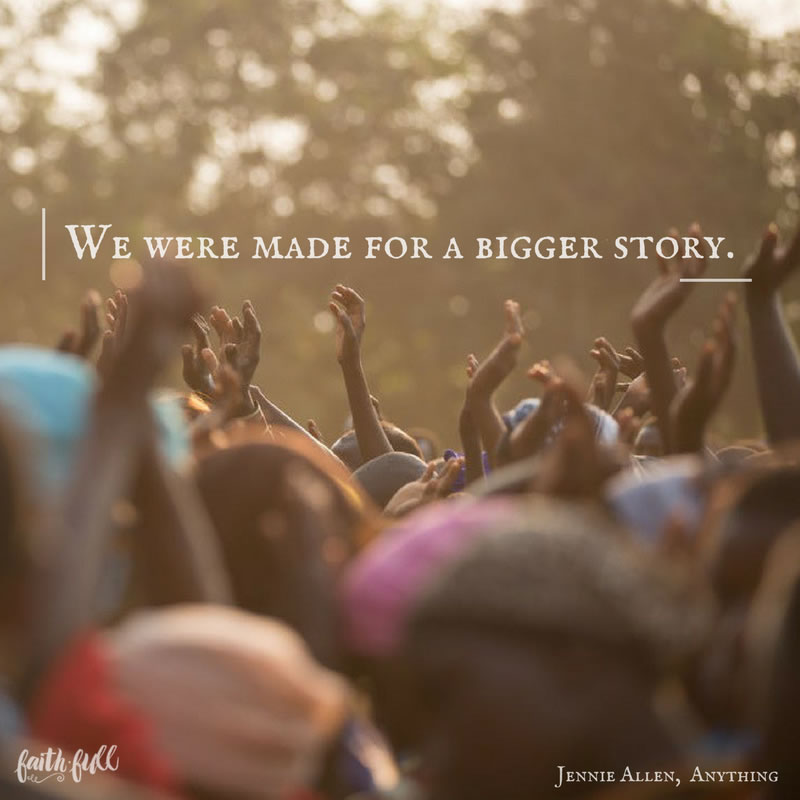 There are always doubts. We doubt because God, while He gets louder, is still invisible, because of the people questioning your sanity and the difficulty of just following a wild invisible God into uncomfortable spaces. We doubt because of the risk, the cost, the abandonment of rights and comforts, the disapproval of people you really love, and then on top of it all, because you have now officially picked a fight with the devil.

The devil is real, and nothing ticks him off more than people waking up from the numb stupor he has crafted to keep us harmless.

My husband Zac and I were awake and running and single-mindedly chasing God, and that got the devil’s attention.

We’ve served God long enough to experience attack. In fact, we came to expect it in the early years of church planting. Zac and I eventually would stop whatever irrational fight we were having and laugh, blame it on the devil, and call a truce. But we were in new territory. The devil stepped up his game.

In a matter of months, on top of all the new change coming and the weight of it all, we experienced:

Every day Zac (when we weren’t fighting) would look at me and hug me and then he would say, “Are we right with God?” If the answer was yes then he would ask, “Then how do we obey Him in this new hard thing?”

And the answer was usually clear. Honestly, I could handle all of the hard stuff until we were at odds with each other. Zac had been my rock in all of this. I leaned on him to support me through the weighty callings on our lives. He and I were unified until this point. Losing that unity made me question everything.

I had just spent the hardest week of my life pouring my guts out on camera for the Stuck study. It was one of the scariest and most intense things I’d ever done. One night, it felt as if the attacks had come so hard for so many weeks that I locked myself in my bathroom not to cry… but to cuss. I was mad. I punched the air as though the devil was so real I might hit him. And I begged God for reprieve.

“Do you see us? We are getting our butts kicked! Can You get in here, please, and issue some backup? We are dying!”

We were pouring ourselves out and getting attacked from every side. I needed it to let up. I was losing perspective and I needed to breathe. I just had it out.

It should not surprise us if life is hard, especially if we love Jesus. [tweet this] We are at war — not in heaven.

And yet it always does surprise us.

Jesus prayed before He died, asking God to use us here. He sent us on God’s mission to redeem and love and pursue and protect and heal. Jesus said that He was going but He was leaving these men, and the ones who would believe in Him because of them, to continue His mission… but there would be attack. He said,

I do not ask that you take them out of the world, but that you keep them from the evil one. — John 17:15

When you are truly about the things of God, there is always attack. [tweet this]

While I may have read in my Bible that we are in a spiritual war, that truth had not fully adjusted my expectations of this life. To accept that life is supposed to be hard is the beginning of joy.

There is freedom in understanding that heaven is coming and we are not there yet.

We’re called to live, instead, aware that we are at war with a ruthless enemy who is trying to destroy us if we are living surrendered to Jesus. [tweet this]

It reminds me of Gone with the Wind. Scarlett O’Hara is a little diva before the war. Her food is brought in to her extravagant bedroom on silver trays. But when she gets home to Tara after the war, she gets her hoe in the dirt and tries to get corn to grow, telling everyone around her to quit complaining. Because of the war, her reality was different, and therefore she lived differently. She went from pouty and spoiled to an intense work horse.

But honestly, I think most people are craving something bigger than comfort and an easy life. I think, if you are still reading this, you are someone who feels that. You might watch movies and shows such as Braveheart or Band of Brothers and you realize there is something deeply moving about war, about fighting for something worthy of death, about living lives that matter for something big. I think we watch those things and long to participate in something bigger than PTA and cheering for the Mavs. I think God wrote that into our souls.

We were made for this bigger story… we were made to show the glory of God and to fight dark cosmic forces, even if we are at PTA or a Mavs game. I know — it still sounds insane to me too.

We have one foot on the earth and one foot in heaven. We’re present here, not taken out of this world but living for another. We’re fighting for God’s glory and clinging to him for protection and guidance.

Ephesians 6 is clear about this war:

Put on the whole armor of God, that you may be able to stand against the schemes of the devil. — Ephesians 6:11

God begins in Ephesians 6 by telling us something like this:

I grew up thinking that it was not very Christian to talk about the devil too much. What the heck?! I think it matters. I think when cosmic evil dark forces are fighting you… it is good to at least have a heads-up.

We are not fighting flesh and blood; we are fighting arrows launched to us by dark forces who want to annihilate us.

It helped me be more able to forgive when I realized we never are really fighting people. My friends, my husband, they love God and love me, but the devil knows if I feel alone, unsafe with people in our church, unsafe at home with my husband, I quickly unravel. Again, it’s like the war in Band of Brothers. They went through hell, but having each other made it bearable. Forgiveness becomes easier when I realize people are not my enemies.

Something about war makes us better. We live more thankful, less numb. We aren’t quite so spoiled.

God has bigger purposes in allowing us to suffer, bigger than just winning. He allows us to suffer because we change through suffering.

We hurt with others better. We become humble. We want Him more.

Count it all joy, my brothers, when you meet trials of various kinds, for you know that the testing of your faith produces steadfastness. — James 1:2–3

Honestly, we grow up through suffering. And most of us need to grow up. I’ve learned to quit wishing away the hard stuff, because I don’t want to miss all the good stuff that goes with it.

Zac and I made up. He is my best friend again, but we continue to walk through attacks. We will all continue to face discouragement, loneliness, criticism, and suffering.

And here is what I hear God speaking to me in it.

And then, you run. Let your feet carry you into battle building My name, sharing My love, telling My story, showing My glory. Go. Run. Fight. Do not just sit there feeling sorry for yourself. Run and fight.

Let your shield be faith. See, if I am real to you — if you believe you stand behind the God of universes — you won’t need to be afraid. You may get tired but you won’t forget why this war matters if you don’t forget Me. You’ll fight bravely, like someone who knows she fights for a cause worth dying for. You’ll keep fighting if you see Me.

Fight bravely because I am for you and I am with you.

Watch the Anything Video

Excerpted with permission from Anything by Jennie Allen, copyright Thomas Nelson.

Forgiveness becomes easier when I realize people are not my enemies. Does that hit home for you like it does for me? Are you under attack? Maybe even the biggest one of your life? I’ve been there and Jennie’s right — it can make us better… but only if we choose godliness in the middle of suffering and attack. Take a moment to be reminded by Scripture that you are not fighting flesh and blood. Remember who you are fighting and that God is with you! Please share your thoughts and comments on our blog! We would love to hear from you! ~ Laurie McClure, Faith.Full