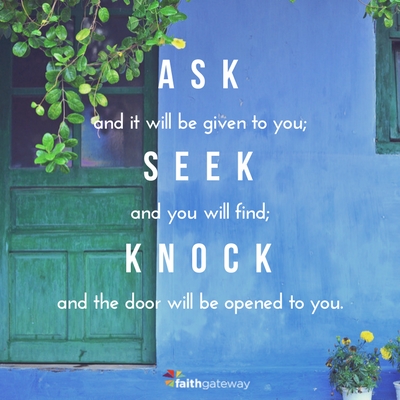 Editor’s Note: Today is the National Day of Prayer and we would love for you to join other believers all over the United States in praying for our families, our nation, and the world. We’re so thankful for God’s blessings and know that He hears us and responds when we pray. We hope you’ll join us!

… And if by prayer

Incessant I could hope to change the will

Of Him who all things can, I would not cease

To weary Him with my assiduous cries.

Jesus’ story about village neighbors must have provoked smiles and chuckles in his first-century audience. A man opens his door to an unexpected guest late one night – not uncommon in a desert climate that encourages travel after sunset – only to find his pantry bare. In a region renowned for hospitality, no decent person would turn away a weary traveler or put him to bed without nourishment, so the host strikes out to a friend’s house to ask for bread.

Kenneth Bailey, a Presbyterian missionary who lived in Lebanon forty years, illuminates some of the cultural nuances behind the story. Palestinians use bread as Westerners use silverware: they break off bite-sized pieces, dip into a common dish of meat and vegetables, and eat the entire sop. The man with empty cupboards was likely asking his friend for a main course as well as loaves of bread, and even that was typical. Villagers frequently borrowed from each other in hospitality emergencies. Bailey recalls one instance: “While living in primitive Middle Eastern villages, we discovered to our amazement that this custom of rounding up from the neighbors something adequate for the guest extended even to us when we were the guests. We would accept an invitation to a meal clear across the village, and arrive to eat from our own dishes which the villagers had borrowed quietly from our cook.”

In Jesus’ story, though, the neighbor stubbornly refuses the request (see Luke 11). He has already gone to bed, stretched out with his family on a mat in the one-room house – and, besides, the door is bolted shut. “Don’t bother me,” he calls to his neighbor outside. “I can’t get up and give you anything.”

A Middle Eastern audience would have laughed out loud at this lame excuse. Can you imagine such a neighbor? Jesus was asking. Certainly not! No one in my village would act so rudely. If he did, the entire village would know about it by morning!

Then Jesus delivers the punch line: “I tell you, though he will not get up and give him the bread because he is his friend, yet because of the man’s boldness [his persistence, his shamelessness] he will get up and give him as much as he needs.” The application to prayer follows immediately:

So I say to you: Ask and it will be given to you; seek and you will find; knock and the door will be opened to you.

Luke positions this story right after Jesus’ teaching on the Lord’s Prayer, drawing a sharp contrast between the reluctant neighbor and God the Father. If a cranky neighbor who has turned in for the night, who wishes more than anything you would go away, who does his best to ignore you – if such a neighbor eventually rouses to give what you want, how much more will God respond to your bold persistence in prayer! After all, what earthly father would sneak a snake under his son’s pillow when he asks for a fish, or drop a scorpion on his daughter’s breakfast plate instead of an egg?

The Lord’s Prayer, often reduced to a mumbled ritual, an incantation, takes on new light in this story abutting it. We should pray like a salesman with his foot wedged in the door opening, like a wrestler who has his opponent in a headlock and won’t let go.

The God “who watches over you will not slumber,” promises a psalm of comfort. Even so, sometimes when we pray it feels as if God has indeed nodded off. Raise your voice, Jesus’ story implies. Strive on, like the shameless neighbor in the middle of the night.

Excerpted with permission from Prayer: Does It Make Any Difference by Philip Yancey, copyright Zondervan.

Ask seek knock… Easier said than done when it seems that God isn’t answering the door! Have you quit praying about something because you didn’t get an answer right away? Don’t stop! Be persistent! Keep knocking!

The theme for 2020 is Pray God’s Glory Across the Earth. It seems appropriate that the chosen Scripture for this year is Habakkuk 2:14.

For the earth shall be filled with the knowledge of the glory of the Lord, as the waters cover the sea.

Will you join us today in prayer for our great Nation? Leave your comments today on our blog