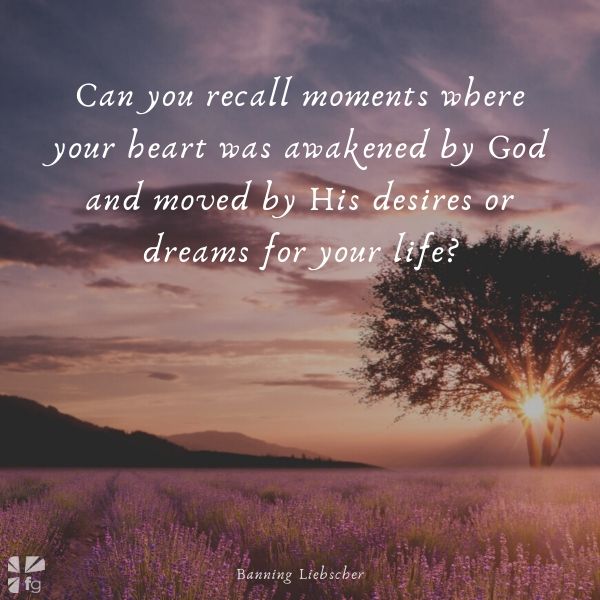 Pay attention to the things that move you because they reveal the things in your heart. ~ Banning Liebscher

Do you remember dreaming as a kid about who or what you wanted to be when you grew up? I actually get a kick out of remembering all of the different things my eight-year-old self wanted for my forty-year-old-self: to be a police officer like my dad, or a baseball player, or a sports broadcaster. And one of my favorite things about the journey of parenting was listening to my kids do the same when they were little. Ellie was convinced she was going to play in the WNBA, Raya wanted to be an astronaut, and my son, Lake, loves basketball and playing video games.

As we grow older, the dreams of our childhood start to take a different shape as they are influenced by our experience of the world around us. I’m sure most of us remember a few naysayers who said we couldn’t be the astronaut or biologist or athlete we wanted to be, and the cheerleaders who encouraged even the slightest pursuit of an interest (the kind of people who thought the chess club flyer they found in your backpack meant you were going to be the next world champion of chess). But let’s not forget that our dreams have also been influenced by our experience of God, who has been patiently pursuing every opportunity to awaken our hearts to His dreams for us and His call on our lives.

Can you recall moments where your heart was awakened by God and moved by His desires or dreams for your life? I can think of several moments in my life when that happened, like reading powerful biographies as a seventeen-year-old, or listening to certain preachers in my late teens, and having words spoken over me in my early twenties from others who were seeing and sensing God’s call on my life. At the time, I didn’t have words for those experiences, I just knew something had awakened in me — something I could not ignore. Almost two decades after those defining moments in my life, I’m convinced that what matters more than the moments of being awakened to God’s dreams for our lives, is what we actually do with those dreams. This is what changes the trajectory of our lives. But how do we know what to do?

Jonathan, the son of King Saul, and his armor-bearer give us a healthy example in 1 Samuel of what it looks like to thoughtfully engage God’s call on our lives by owning the call, dreaming of the call, counting the cost of the call, and moving forward with the call. Jonathan and his armor-bearer refuse to settle for anything less than who God wants them to be and what he wants them to do. My hope is that this session, inspired by Jonathan’s story, encourages you to live your best life by fully engaging God’s call on your life. It’s time for you to stand up and move toward changing the world by stepping out on your three-mile walk, even when it seems like everything is at stake. Are you with me?

If you or any of your group members are just getting to know one another, take a few minutes to introduce yourselves. Then, to kick things off, discuss one of the following questions:

Invite someone to read aloud the following passage. Listen for fresh insights as you hear the verses being read, and then discuss the questions that follow. We’re starting with the backstory in 1 Samuel 13, so we understand the context of Jonathan’s three- mile walk in 1 Samuel 14.

Saul was thirty years old when he became king, and he reigned over Israel forty-two years. Saul chose three thousand men from Israel; two thousand were with him at Mikmash and in the hill country of Bethel, and a thousand were with Jonathan at Gibeah in Benjamin. The rest of the men he sent back to their homes. Jonathan attacked the Philistine outpost at Geba, and the Philistines heard about it. Then Saul had the trumpet blown throughout the land and said, “Let the Hebrews hear!” So all Israel heard the news: “Saul has attacked the Philistine outpost, and now Israel has become obnoxious to the Philistines.” And the people were summoned to join Saul at Gilgal. The Philistines assembled to fight Israel, with three thousand chariots, six thousand charioteers, and soldiers as numerous as the sand on the seashore. They went up and camped at Mikmash, east of Beth Aven.

When the Israelites saw that their situation was critical and that their army was hard pressed, they hid in caves and thickets, among the rocks, and in pits and cisterns. Some Hebrews even crossed the Jordan to the land of Gad and Gilead. Saul remained at Gilgal, and all the troops with him were quaking with fear. He waited seven days, the time set by Samuel; but Samuel did not come to Gilgal, and Saul’s men began to scatter. So he said, “Bring me the burnt offering and the fellowship offerings.” And Saul offered up the burnt offering. Just as he finished making the offering, Samuel arrived, and Saul went out to greet him.

“What have you done?” asked Samuel. Saul replied, “When I saw that the men were scattering, and that you did not come at the set time, and that the Philistines were assembling at Mikmash, I thought, ‘Now the Philistines will come down against me at Gilgal, and I have not sought the Lord’s favor.’ So I felt compelled to offer the burnt offering.”

Then Samuel left Gilgal and went up to Gibeah in Benjamin, and Saul counted the men who were with him. They numbered about six hundred. Saul and his son Jonathan and the men with them were staying in Gibeah in Benjamin, while the Philistines camped at Mikmash. Raiding parties went out from the Philistine camp in three detachments. One turned toward Ophrah in the vicinity of Shual, another toward Beth Horon, and the third toward the borderland overlooking the Valley of Zeboyim facing the wilderness. Not a blacksmith could be found in the whole land of Israel, because the Philistines had said, “Otherwise the Hebrews will make swords or spears!”

So all Israel went down to the Philistines to have their plow points, mattocks, axes and sickles sharpened. The price was two-thirds of a shekel for sharpening plow points and mattocks, and a third of a shekel for sharpening forks and axes and for repointing goads. So on the day of the battle not a soldier with Saul and Jonathan had a sword or spear in his hand; only Saul and his son Jonathan had them. Now a detachment of Philistines had gone out to the pass at Mikmash. — 1 Samuel 13

What do you notice in this passage? Name one key insight.

Imagine you are Saul or Jonathan. What would be going through your mind in this moment?

Play the video for session one. As you watch, use the following outline to record any thoughts or concepts that stand out to you.

Every believer has a call on their life:

Get off the sideline: be fully engaged.

The three-mile walk: Jonathan and his armor-bearer.

God Is Awakening You with Dreams in Your Heart

Childlike ability to dream. Jonathan and his armor-bearer.

With God All Things Are Possible

Jesus looked at them and said, “With man this is impossible, but with God all things are possible.” — Matthew 19:26

Start dreaming again. Who is God calling you to be?

The Arab village of Mukhmas preserves the name of the biblical city of Michmash. The town sat next to “the pass” mentioned twice in Scripture and apparently served to keep an eye on this important route. Michmash was settled throughout the period of the monarchy, as it was mentioned in the account of Saul and Jonathan and later in a prophecy of Isaiah. Michmash was near the border between Benjamin and Ephraim, and thus near the border of the northern and southern kingdoms, probably belonging to Israel most of the time. The hill country is deeply cut by deep canyons (wadis) that run east-west. These significantly restrict traffic to the ridges above the wadis, making passage north-south difficult except on the central watershed ridge. Consequently, this route is noted in Scripture on several occasions. The pass is also mentioned in connection with Jonathan’s attack on the Philistines (1 Samuel 14). Saul’s son surprised the Philistine garrison by not coming across the pass, but instead going around and climbing up and down steep cliffs. These cliffs were named Seneh and Bozez. When the Philistines saw Jonathan and his armor-bearer climbing up, they called to them to continue, thus signaling to Jonathan that God was with them. Jonathan’s defeat of this contingent led to a national victory that day. (https://www.bibleplaces.com/michmash/)

Briefly review the outline for the video teaching and any notes you took. In the space below, write down the most significant point you took away from this session.

Is there a specific action step you can take this week to move toward the dream or desire God is inviting you into right now?

Close your time together by praying for each other. Pray that God would give you clarity on what it looks like to pursue His dreams, His desires, and His vision for your life. And if you already have that clarity, ask God for the wisdom and courage to keep moving forward on your journey from a healthy place. Write down any specific prayer requests in the space below so you can remember to continue praying throughout the week.

We’d love to hear your thoughts on The Three-Mile Walk in the blog comments!