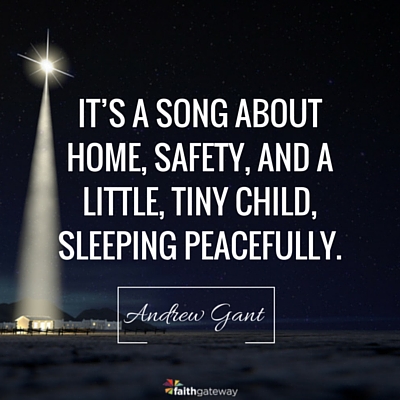 In a 1996 poll to find the most popular Christmas carols in the United Kingdom, “Away in a Manger” came in second.

Not bad for a youngster.

This one’s only been around for about 130 years. In that time it has garnered more tunes than probably any other carol. It has also generated considerable confusion about who wrote it, a misattribution to Luther, and a minor theological controversy.

In 1884 this appeared in a Boston publication called The Myrtle:

Martin Luther, the great German reformer, who was born four hundred years ago the 10th of next November, composed the following hymn for his children; and it is still sung by many German mothers to their little ones:

Away in a manger,

No crib for his bed,

Lay down His sweet head.

The stars in the sky

Looked down where He lay,

Asleep in the hay.

The cattle are lowing,

No crying He makes

Look down from the sky,

And stay by my crib

It’s an intriguing item. For one thing, the paper states as a fact that the text is by Martin Luther. It isn’t. Luther wrote lots of hymns, but he didn’t write this one. Deliberately or otherwise, the editors have confidently misinformed their readers, for reasons that may or may not be connected with a series of pageants and celebrations held in Boston and the surrounding area to mark the four-hundredth anniversary of Luther’s birth (which was actually a year earlier, anyway). It stuck. The hymn appeared in print many times with his name attached in the following decades, often under the unambiguous title “Luther’s Cradle Hymn.” Lots of children have been lulled to sleep by these words. Luther’s own neugeboren kinder were not among them.

Another interesting feature is that the words, not untypically for a Christmas carol, are not quite as we know them today. Change has not necessarily meant improvement. The image of the Christ-child “watching my lullaby” is a touching one, perhaps better than the faux-archaic “stay by my bedside ‘til morning is nigh,” which has replaced it. The poem is also one syllable short in a few places, for example in line five, necessitating the later addition of the metrically regular but meteorologically questionable adjective bright for the night sky.

As well as no author, there is no tune. It’s a fascinating thought that the editors expected their lyric to be sung to Henry Bishop’s parlor song “Home! Sweet Home!” This tune, with words by the American John Howard Payne and based (according to Bishop) on a Sicilian folk song, was vastly popular in the United States. Both sides in the Civil War adopted it. Lincoln had it sung at the White House. Its message of the heartfelt peace and sanctity of the family home make it the perfect fit for this quiet little household prayer over the sleeping child. Try it. See?

Despite, or perhaps because of, this lack of an authorized melody, composers treated the text as fair game for their own inventions, inspired no doubt by the simple charm of the imagery and the gentle, rocking triple-time meter (an unusual feature: there are some traditional carol tunes with three beats to the bar or half-bar, but they tend to work by elongating the first syllable of groups of two, for example “In dulci jubilo” and “Quem pastores”). The vast majority of the specially composed tunes to “Away in a Manger” are, unlike “Home! Sweet Home!” in some version of three-time.

The theological controversy centers on the line “the little Lord Jesus, no crying He makes,” which has been taken by some as denying Christ the full attributes of humanity by not behaving like a real human child, a heresy known as “Docetism.” This is certainly not the place to become entwined in doctrinal niceties, except perhaps to observe that this is far from the only occasion in our carol repertoire where a poet is filling in with a bit of local color of his own. The Gospels tell us almost nothing about Christ’s infancy and early life, and many of its most familiar features are later inventions and embellishments, hallowed by long use: the animals peering patiently at us from inside the stable, source of inspiration alike to the greatest masters of Renaissance art and the costume ladies of the school nativity play; the three kings with their crowns and gowns; and, above all, the bleak midwinter. There are no frosty winds in Luke. And anyway, the poet doesn’t say that the baby Jesus doesn’t cry at all, ever — just not at this particular moment. Perhaps the lowing of the cattle distracted Him.

In 1951, Richard S. Hill published a thorough and splendidly entertaining article called “Not So Far Away in a Manger,” listing all the musical settings he could find. There are forty-one. Clearly there is no scope (and probably less appetite) for a comprehensive review of the whole lot here (and there are plenty more, both before and since Hill’s epic feat of collation and indexing). We limit ourselves here to the two tunes sung most often in, respectively, the United Kingdom and the United States.

The biographies of the two composers are strikingly similar.

William J. Kirkpatrick was an organist, hymn writer, and one-time fife major in the Philadelphia Volunteers. He issued some one hundred books of devotional pieces, often with his business partner John R. Sweney. In 1895, they published Around the World with Christmas. A Christmas Exercise, a kind of Christmas play. “Away in a Manger” (under the usual title “Luther’s Cradle Hymn”) is “for singing by the Primary School, or selected scholar.” Kirkpatrick’s simple piano arrangement evokes the world of the school song and the camp meeting, with its strong, static bass and well-meaning thirds and sixths.

A nice story neatly captures something of the character of Kirkpatrick and his world. He would often attend large Methodist meetings, organizing and leading the music. On one occasion he noticed that the soloist he had engaged to lead the hymns was getting into the habit of leaving before the sermon. Concerned for the state of the young man’s soul, he began to turn over the words of a new hymn in his mind:

Kirkpatrick handed the young man his new lyric. Moved, the singer found himself approaching the altar and accepting the preacher’s call to “come home.” Kirkpatrick’s tune to “Away in a Manger” has kept the name originally given to the words, “Cradle Song.”

James Ramsey Murray, composer of our other tune, also served as an army musician in the Civil War period, studied the art of hymn writing with leading practitioners including the great Lowell Mason, worked in publishing and as a schoolteacher, and wrote a great many hymns. The residual German associations of this one, surface in his version. His tune bears the name “Mueller,” after a certain Carl Mueller, who is credited as the composer in a number of publications but appears in fact to be not just the subject of yet another case of misattribution but entirely fictional.

In its short career, this little carol has gone through many of the life experiences of many of its older and wiser brethren. It has lost track of some of its parents, has picked up several more and less suitable partners, and spawned a number of offspring and variants. Like folk song, many of its tunes sound like variations of each other, perhaps because the placing of cadence and meter is almost a natural phenomenon, like similarities of word formation across different languages. Some of the tunes actually fit together, again, like some folk songs.

It’s a folk song for our times — the new old. It’s a song about home, safety, and a little, tiny Child, sleeping peacefully.

Excerpted with permission from The Carols of Christmas by Andrew Gant, copyright Thomas Nelson.

Is Away in a Manger your favorite carol? Come share with us on our blog. We would love to hear from you! ~ Devotionals Daily