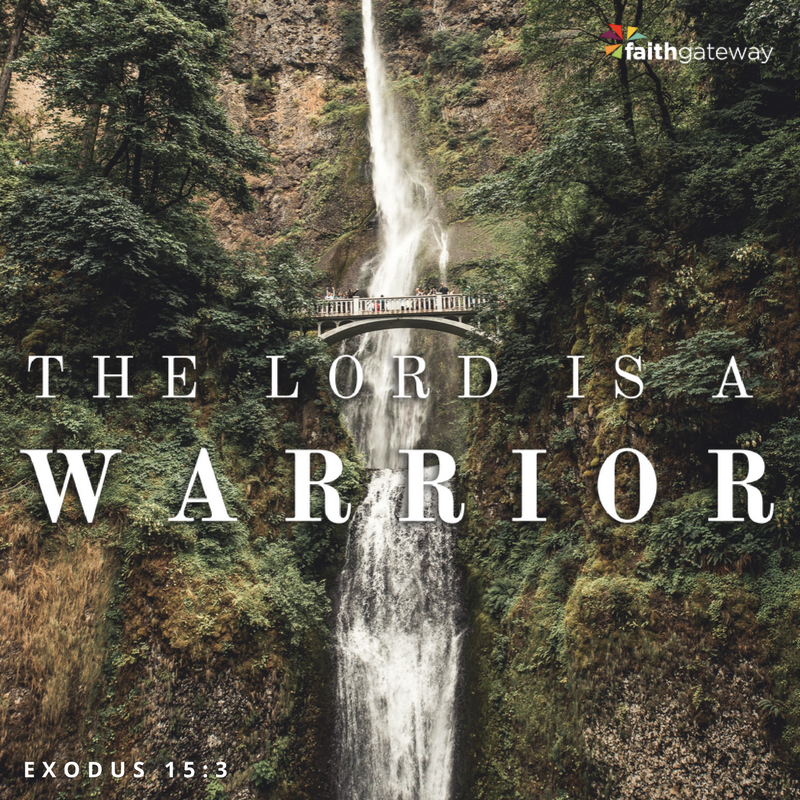 Hanging on to the Truth

In any hand-to-hand combat, there’s a constant back-and-forth of blows, dodges, blocks, counterattacks, and so forth. That’s exactly what is going on in the unseen around us. Only it takes place, initially, at the level of our thoughts. When we are under attack, we’ve got to hang on to the truth. Dodge the blow, block it with a stubborn refusal, slash back with what is true. This is how Christ answered Satan — He didn’t get into an argument with him, try to reason his way out. He simply stood on the truth. He answered with Scripture and we’ve got to do the same. This will not be easy, especially when all hell is breaking loose around you. It will feel like holding on to a rope while you’re being dragged behind a truck, like keeping your balance in a hurricane. Satan doesn’t just throw a thought at us; he throws feelings too. Walk into a dark house late at night and suddenly fear sweeps over you; or just stand in a grocery line with all those tabloids shouting sex at you and suddenly a sense of corruption is yours.

But this is where your strength is revealed and even increased — through exercise.

Stand on what is true and do not let go. Period.

The traitor within the castle will try to lower the drawbridge, but don’t let him. When Proverbs 4:23 tells us to guard our hearts, it’s not saying, “Lock them up because they’re really criminal to the core”; it’s saying, “Defend them like a castle, the seat of your strength you do not want to give away.” As Thomas à Kempis says, “Yet we must be watchful, especially in the beginning of the temptation; for the enemy is then more easily overcome, if he is not suffered to enter the door of our hearts, but is resisted without the gate at his first knock.”

Remember the scene in Braveheart where Robert the Bruce’s evil father is whispering lies to him about treason and compromise? He says to Robert what the Enemy says to us in a thousand ways: “All men betray; all men lose heart.” How does Robert answer? He yells back, I don’t want to lose heart! I want to believe, like [Wallace] does. I will never be on the wrong side again.

That is the turning point in his life . . . and in ours. The battle shifts to a new level.

God Is With Us

Joshua knew what it was to be afraid. For years he had been second in command, Moses’ right-hand man. But now it was his turn to lead. The children of Israel weren’t just going to waltz in and pick up the promised land like a quart of milk; they were going to have to fight for it. And Moses was not going with them. If Joshua was completely confident about the situation, why would God have to tell him over and over and over again not to be afraid? In fact, God gives him a special word of encouragement:

As I was with Moses, so I will be with you; I will never leave you nor forsake you. — Joshua 1:5

How was God “with Moses”? As a mighty warrior. Remember the plagues? Remember all those Egyptian soldiers drowned with their horses and chariots out there in the Red Sea? It was after that display of God’s strength that the people of Israel sang,

God fought for Moses and for Israel; then He covenanted to Joshua to do the same and they took down Jericho and every other enemy.

Jeremiah knew what it meant to have God “with him” as well. “But the LORD is with me like a mighty warrior,” he sang.  “so my persecutors will stumble and not prevail” (Jer. 20:11). Even Jesus walked in this promise when He battled for us here on earth:

You know what has happened throughout Judea, beginning in Galilee after the baptism that John preached — how God anointed Jesus of Nazareth with the Holy Spirit and power, and how he went around doing good and healing all who were under the power of the devil, because God was with him. — Acts 10:37-38, emphasis added

How did Jesus win the battle against Satan? God was with him. This really opens up the riches of the promise Christ gives us when he pledges, “I am with you always, even to the end of the age” and “I will never leave you nor forsake you” (Matthew 28:20; Hebrews 13:5 NKJV). That doesn’t simply mean that He’ll be around, or even that He’ll comfort us in our afflictions. It means He will fight for us, with us, just as He has fought for His people all through the ages.

So long as we walk with Christ, stay in Him, we haven’t a thing to fear.

Satan is trying to appeal to the traitor’s commitment to self-preservation when he uses fear and intimidation. So long as we are back in the old story of saving our skin, looking out for Number One, those tactics will work. We’ll shrink back. But the opposite is also true. When a man resolves to become a warrior, when his life is given over to a transcendent cause, then he can’t be cowed by the Big Bad Wolf threatening to blow his house down. After Revelation describes that war in Heaven between the angels and Satan’s downfall to the earth, it tells how the saints overcame him:

They overcame him by the blood of the Lamb and by the word of their testimony; they did not love their lives so much as to shrink from death. — Revelation 12:11

The most dangerous man on earth is the man who has reckoned with his own death.

Sure, you can create a safe life for yourself… and end your days in a rest home babbling on about some forgotten misfortune. I’d rather go down swinging. Besides, the less we are trying to “save ourselves,” the more effective as warriors we will be.

Courage is almost a contradiction in terms. It means a strong desire to live taking the form of a readiness to die. “He that will lose his life, the same shall save it,” is not a piece of mysticism for saints and heroes. It is a piece of everyday advice for sailors or mountaineers. It might be printed in an Alpine guide or a drill book. The paradox is the whole principle of courage; even of quite earthly or quite brutal courage. A man cut off by the sea may save his life if he will risk it on the precipice. He can only get away from death by continually stepping within an inch of it. A soldier surrounded by enemies, if he is to cut his way out, needs to combine a strong desire for living with a strange carelessness about dying. He must not merely cling to life, for then he will be a coward, and will not escape. He must not merely wait for death, for then he will be a suicide, and will not escape. He must seek his life in a spirit of furious indifference to it; he must desire life like water and yet drink death like wine.

“All men die; few men ever really live.” Really living for Christ means accepting that we are at war. With a fierce enemy. And yet we don’t have to be afraid because God is with us! Come share your thoughts on our blog. We would love to hear from you!