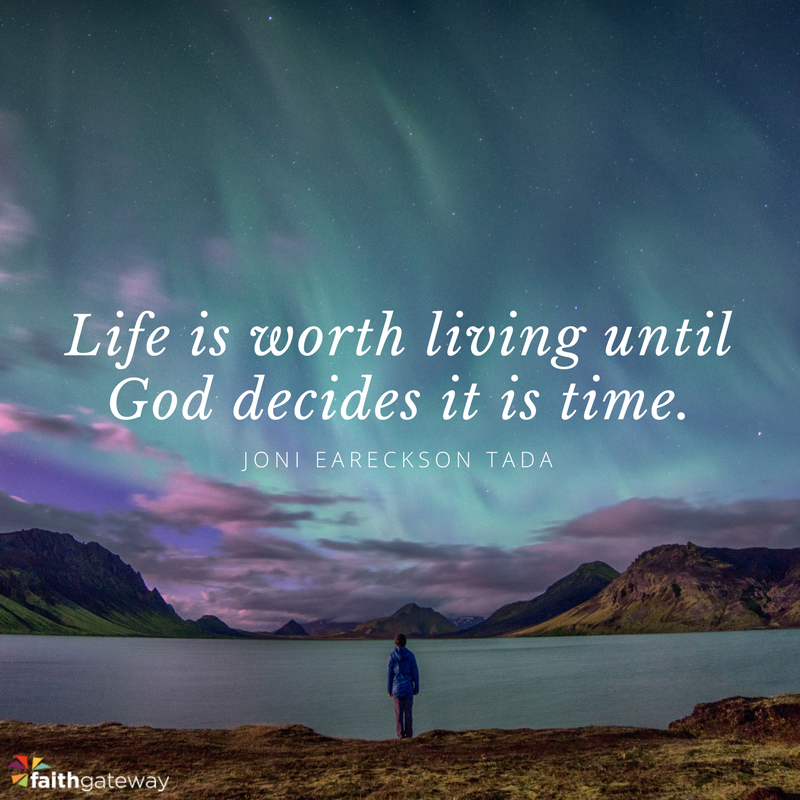 When I broke my neck at the age of 17, it was earth-quaking. One moment, I was healthy, athletic, and heading to college with big dreams for a bright future… and the next? I’m a quadriplegic. Everything from toileting, bathing, to feeding myself, was out of my hands. My hopes had been shattered, and my dreams, crushed. For more than three months in the hospital, I was simply numb — just being shuffled on a gurney from one exam room to the next. And things weren’t getting better.

Once the get-well cards stopped coming and everyone went back to their routines; once I learned my paralysis was permanent, depression settled in. Many nights I would wrench my head back and forth on the pillow, hoping to break my neck at some higher level and finally put an end to my life. Thankfully, back in the 60s, the ‘right to die’ movement was barely an idea; there were very few so-called death-with-dignity advocates pushing euthanasia legislation through state assemblies. And am I relieved!

I could have easily bought into the idea that I should be allowed to end my life, if I found my suffering unbearable.

Things did get better when I got out of the hospital. Several Christ-followers befriended me and involved me in the mainstream of life. They were young people my age, and they ascribed positive meaning to my afflictions, lifted me out of social isolation, and kept me connected to reality. I began to see that life was, indeed, worth living. Fifty years later, I now lead a global disability ministry organization that gives the same Christ-centered love to other despairing people with disabilities – over the years, thousands have found the same answer through Joni and Friends: life is worth living.

Something else has changed in the 50 years since those dark nights when I was in the hospital, wanting to die. The right to die movement is now active, focused, and well-funded. It’s been empowered by a sense of entitlement that emerged after the Supreme Court ruled in 1973 that the U.S. Constitution contained an inherent ‘right to privacy.’ The ruling not only led to legalized abortion, but it gave momentum to the right-to-die movement – if people could legally terminate a pregnancy, why not legally choose the timing of your own death, should you feel your suffering is unbearable?

In 1997, however, the US Supreme Court ruled that there was no inherent ‘right to die’ in the U.S. Constitution. That did not stop states from creating legislation based on people’s perception of a ‘right to die.’  Oregon was the first state to legalize physician-assisted suicide for mentally competent people with terminal illnesses. California, Colorado, Vermont and Washington also have enacted similar laws based on the Oregon model (Montana’s Supreme Court ruled that nothing in state law prevents physicians from helping terminally ill patients and their lives).

Sadly, people with disabilities – people like me when I was first injured – are wondering if they could qualify for aid-in-dying through a lethal prescription. Under current law, however, physicians may only give lethal drugs to patients with terminal illnesses. The law’s proponents have insisted it could only be offered to those who had 6 months or less to live. But even that safeguard is beginning to crumble.

In January, the Oregon Health Authority (an agency which studies and reports on Oregon’s Death with Dignity Act) stated that, “any chronic condition which, if left untreated, would result in death within six months could be a ‘terminal disease.’” So, a terminal illness doesn’t always mean stage IV cancer; it could mean muscular dystrophy, a disease which, left untreated, could take one’s life in a short amount of time. Most people would not consider MD as terminal, but a person with an ‘untreated’ case of this disease might qualify under the law.

The agency now says, “the law is best seen as a permissive law… it does not compel patients to have exhausted all treatment options, or to continue current treatment.… If the patient decides they don’t want treatment, that is their choice.”

I know how people can easily despair of their chronic medical condition, whether ALS, MS, MD or even spinal cord injury, like mine. All they needed to qualify for physician-assisted suicide – at least in Oregon – is to leave their medical condition untreated. As an advocate for people with disabilities, this breaks my heart.

The Bible calls Satan a murderer, and our adversary likes to think that the territory of disability is his.

He would love to use MS to smear God’s reputation, convincing a despairing wheelchair-user that the Lord doesn’t care about someone’s suffering. Satan would love to whisper in the ear of a despairing person with a disability that life is not worth living.

The devil’s last frontier is his assault on human dignity, and his most fierce battleground is disability.

This is one reason why I recently revised my book When Is It Right to Die? Christians need to get prepared to stand on the front lines of this burgeoning battle. We need to get informed. With When Is It Right to Die? I wanted to give Christ-followers a keen understanding of the arguments surrounding physician-assisted suicide, as well as give them language for articulating a biblical worldview on life, no matter how disabled or elderly one’s life might be.

People are not “better off dead than disabled,” and life is worth living until God decides it is time.

Christians can do for others, what they once did for me: provide life-encouraging support to persons with disabilities who are despairing. Simply put, they can be a friend. They can provide true spiritual community. This is compassionate care; not setting lethal drugs on the bedside table. No one is better off dead than disabled. Christ-followers have the message that gives life meaning because… life is worth living.

Think about this for a moment: How has our current culture inundated with the right to terminate and the right to die affected you and your thinking about life and its worth? Do you know someone with a disability who could use your support and encouragement? Satan is a liar and life is worth living! Come share your thoughts with us on our blog. We want to hear from you! ~ Devotionals Daily