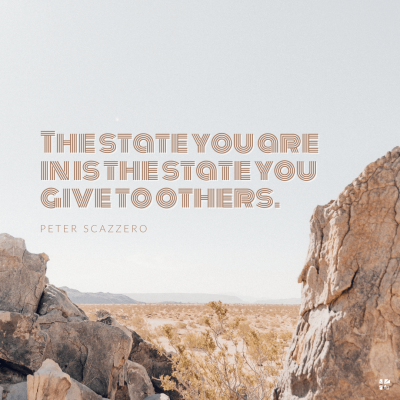 Too many followers of Jesus are chronically overextended and doing more for Jesus than their inner life with him can sustain. They have too much to do in too little time and say a default yes to requests and opportunities without carefully discerning God’s will. Overloaded and depleted constitute “normal” for their lives.

Jesus and the Early Church: Doing for God Out of a Deep Being with God

Prioritizing being-with over doing-for has deep roots in the New Testament and in early church history. Here are just a few examples.

Jesus. Before launching His public ministry of doing, Jesus spent almost thirty years in hiddenness and being, deeply establishing His identity and oneness with the Father. Once He launched His ministry, Jesus intentionally moved back and forth between doing active ministry and being alone with the Father (Luke 5:15-16).

When Jesus selected the Twelve to be His inner circle, He followed the same pattern, requiring that they be with Him before doing active ministry for Him:

He appointed twelve that they might be with Him and that He might send them out to preach and to have authority to drive out demons. — Mark 3:14-15, emphasis added

The Twelve. After Jesus’s death and resurrection, the Twelve then carry on in this pattern of being before doing as they lead the early church. Giving their attention to prayer and ministry of the Word took precedence over all else (Acts 6:2-4). Even when the church experienced explosive growth, they refused to allow the incessant demands and problems of ministry to compromise their grounding in being with Jesus.

The early church. In the first three hundred years of the church, leaders developed a “catechumenate,” a serious discipleship training process.1 Why? The Roman Empire, at different times and in different regions, unleashed severe persecutions against believers. Christians who denied the faith rather than be martyred (and were subsequently known as the “lapsed”) created a serious problem when some wanted to return to the community after the persecution subsided.2 The early church realized that simply getting people to do Christian behaviors — attending worship, evangelizing, and participating in fellowship — would not be enough for people to stand firm in Jesus amidst such pressure. So they established a clear pathway to help people grow in their being-with Jesus so they could persevere in their witness and life for-Jesus.

Theologians from the early church into the Middle Ages. From the second to the seventh centuries, most of the eight greatest pastors and leaders (referred to as Doctors of the Church) — Athanasius, Gregory of Nazianzus, Basil the Great, Ambrose, Jerome, John Chrysostom, Augustine, Gregory the Great — were first monks anchored in a life of prayer and being with God.3 Their service flowed out from that abundance and experience with Jesus.

Disciple Making in Our Churches

When I came to faith in Jesus, I was taught to do a lot of things — how to pray, read Scripture, share the gospel, discover and use my spiritual gifts, lead a small group — the list goes on. This list expanded when I became a leader and had to learn how to do more things — such as delegate, cast vision, and teach effectively. However, one practice that never made it to our list of necessary discipling skills was how to lead out of our being. We emphasized doing so strongly that teaching people to be with Jesus, and themselves, was mostly lost in the process.

We did emphasize the call “to follow my example as I follow the example of Christ” (1 Corinthians 11:1), but that revolved primarily around doing particular activities and remaining faithful. I spent years, literally, developing training to teach people how to do things for Jesus. We assumed their being would somehow be taken care of in the process.

It was a traditional discipleship model that was measurable, predictable, and scalable. We could train almost anyone to do it.

Emotionally healthy discipleship, however, emphasizes being before doing in order to get beneath the surface of people’s lives. See the contrast with traditional discipleship below.

A leadership culture committed to being before doing slows down the discipleship process and radically shifts priorities. The conversations are different. So are the questions we ask. We become more reflective and now regularly ask ourselves, “Do I really want people to imitate the way I am living? In what areas of my life am I speaking of things I am not living?”

These three statements summarize this be-before-you-do approach to ministry:

They’re easy to preach and teach, but challenging to live out.

WHY BEING BEFORE DOING IS SUCH A CHALLENGE TODAY

To be before you do is as revolutionary today as it was when Jesus gathered the Twelve 2,000 years ago, though perhaps for different reasons. The core challenge that makes being before doing so difficult is that it forces us to come face-to-face with our false self. The false self is not a bad or deceitful self so much as a construct of externals — everything from appearance and education to talents and success — that we use to both protect ourselves and to bolster our sense of self-worth.4 Here’s a snapshot of what the false self might look like in the context of ministry.

Craig is a young, gifted preacher and pastor. Raised in a Christian family, he was always encouraged to be all that God called him to be. The motto of his family was, “Good is the enemy of the best.” So Craig worked hard to excel at everything from athletics to academics to church.

After sensing God’s call to vocational leadership and attending seminary, Craig planted a church. The church thrived. I met him three years into his fast-growing church plant. After a few weeks of being in The Emotionally Healthy Spirituality Course with Geri and me, a light went on for Craig. Here is what he said:

When I walk into a room, my subconscious question is, What do these people need me to be so we can relate together? It sounds selfless, but I don’t think it is; rather, it’s my attempt to be and do whatever the person before me needs. I’m terrified that if I am simply myself, it will not be enough to foster connection and friendship. I’m terrified of rejection. So, I choose certain connection over possible rejection. I immediately and subconsciously look to adapt myself, my behavior, and my speech, to best suit the needs of the room.

That means I basically spend my entire day wearing different masks. Not malicious or malevolent masks, but masks all the same. But when I slow down and spend time in solitude before God, before I can subconsciously ask, Who does God need me to be so we can relate? God asks, “Where are you, My son?”

I have no idea how to answer because I don’t know where I am, or who I am, or how I am — other than tired. I’ve spent so much time wearing masks for others (my doing) that I’ve forgotten what my real face actually looks like (my being).

Craig’s self-confrontation, while painful, launched him on a journey into truth. He began the process of paying attention to his emotions, especially the more difficult ones such as anger, sadness, and fear. He has become profoundly aware of his tendency to pretend to be someone on the outside that he is not on the inside — the very definition of a false self. The fruit of this has been revolutionary — personally, as well as in his marriage and his leadership.

Scripture challenges us to shed the “old self” or false self in order to live authentically in our “new self” or true self (Ephesians 4:22, Ephesians 4:24). The question then becomes, how do we know if we’re living out of a false self? At times, our false self has become such a part of who we are that we don’t even realize it. However, the external behaviors of the false self are easier to spot — self-protection, possessiveness, manipulation, self-promotion, and a need to distinguish ourselves from others. When we add a religious layer to this false self, the challenge of dismantling it becomes even more difficult.5

The true self is the exact opposite of the false self. David Benner, a Christian writer and psychologist, describes it as “your total self as you were created by God… the unique face of God that has been set aside from eternity for you.”6 God invites us to remove the false layers we wear so that the “seeds of true self” He has planted inside of us can emerge. While following this path may appear impossible, the God of the universe has made His home in us (John 14:23) and given us the very glory He gave Jesus (John 17:21–23). As we open ourselves to the Holy Spirit, we discover God does in us what we cannot do for ourselves.

We were created to be with God primarily, as His family, His loved ones, His beloved. We do have good to do, but that’s secondary to being with Him. Is that a relief for you? Come share with us! ~ Devotionals Daily