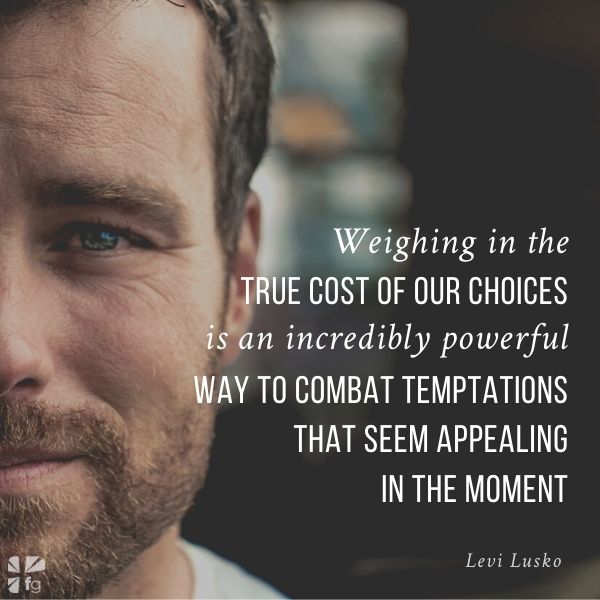 There is truth to the adage that the eyes are the windows to the soul. What you let in through your eyes will work its way inside. Jesus warned us multiple times in the Gospels that our eyes can cause us to sin (Matthew 5:29; 18:9). He spoke about it with one of the most shocking and disgusting pictures in the whole Bible: it would be better to gouge out your eyes than to see and experience hellfire (Matthew 18:9). John told his readers that three different enemies oppose us: “the lust of the flesh, the lust of the eyes, and the pride of life” (1 John 2:16, emphasis added).

That’s what happened when Eve disobeyed God’s instructions in the garden of Eden, committing the sin that plunged the world into darkness: “So when the woman saw that the tree was good for food, that it was pleasant to the eyes, and a tree desirable to make one wise, she took of its fruit and ate. She also gave to her husband with her, and he ate” (Genesis 3:6). Soon after they were hiding under fig leaves, suddenly aware of and ashamed by their nakedness. I saw, I coveted, I took, I hid.

And it’s what happened when David creeped on and became obsessed with Bathsheba, the wife of one of his soldiers. He covered up his lust with the murder of her husband, but his crime began with a look: “Then it happened one evening that David arose from his bed and walked on the roof of the king’s house. And from the roof he saw a woman bathing, and the woman was very beautiful to behold” (2 Samuel 11:2). Seeing Bathsheba was a mistake; the sin started when David didn’t stop looking. He hadn’t done anything wrong until he began coveting. But when he allowed the juices to start flowing, it became very easy to take what wasn’t his and eventually shed blood to hide what he had done. I saw, I coveted, I took, I hid.

That is why Job was so wise to make the following arrangement: “I made a covenant with my eyes not to look lustfully at a young woman” (Job 31:1 NIV). We need to make the same covenant, because even if our doors are locked, Satan will come into our lives through open windows. In fact, the devil tried to do exactly that with Jesus during his forty-day temptation in the wilderness: he showed Jesus “all the kingdoms of the world” and promised them in exchange for Jesus’ allegiance (Luke 4:5-7).

The reason David failed where Jesus, the Son of David, did not is what they did after they saw what they saw. Jesus looked to God.

He quoted a scripture and looked at the temptation through the lens of faith. Because he saw the invisible, he could do the impossible. David, on the other hand, kept looking and soon wanted to hold what he had beheld. It’s like binge-watching a TV show on Netflix: the next episode starts automatically in fifteen seconds if you don’t act decisively.

We can cut sin off at the pass if we learn not to look at dangerous things in the first place. Knowing a little biology might help: when we see something provocative, our bodies release dopamine and epinephrine, also known as adrenaline. That’s why we experience a rush of good feelings, happiness, and a sense of invincibility. One of the reasons pornography is so addictive is because of this “high” that makes you crave more.

The next time your desire is triggered, the craving increases until you give in to it. Like the dog who drools every time a bell rings, you are rewarding and reinforcing a conditioned response every time you give into temptation.

Your brain is always paying attention. Repeated exposure to sin is how bad habits snowball out of control. Jesus said as much: “Most assuredly, I say to you, whoever commits sin is a slave of sin” (John 8:34). Doing three thousand layups every day won’t make you Michael Jordan if you do them with bad form. Practice doesn’t necessarily make perfect, but it always makes permanent.

A cheetah can run only until its brain temperature hits 105 degrees Fahrenheit. At that point its options are simple: sit down and pant until it cools down, or die. The gazelle has a chamber where inhaled breath cools down its blood before it gets to the brain. This allows for greater endurance, because the gazelle’s body can be at 109 degrees but its brain will still be at 105.12 So a gazelle can keep running after the cheetah is forced to stop. This is how a gazelle can escape a cheetah. In the most literal sense, the cooler head prevails.

Shouldn’t that be our strategy? Shouldn’t we limit access to the kinds of things that get our blood pumping and make our faces flush? And if we do find ourselves faced with temptation, shouldn’t we take immediate, aggressive, and evasive action?

I heard a pastor once say to a group of men, “You have only enough blood in your body to power either your brain or your crotch. So if you are thinking with one, the other is not functioning.” That potentially offensive — yet highly profound — statement explains so much stupidity in my life and in the lives of people I have known. Stallions have to be kept far away from mares in heat, because the male horses will impale themselves on fences trying to get to the females. Turned-on humans can be as self-destructive as horses. When we hear of people who have made messes of their lives, marriages, careers, or ministries due to sexual sin, we all wonder,

What were they thinking?

Had they thought about their actions, they would have realized that no matter how good what they were about to do was going to feel, it wasn’t worth what they would be giving up. Sin makes you stupid.

I once toured the Apple headquarters in Cupertino, California, and the Facebook headquarters in Menlo Park, California. The man who showed us around Apple was one of the people who invented Siri. He and a Facebook employee attended a church where I had spoken, and they invited us into their respective magical kingdoms. I was Charlie, and I had received not one but two golden tickets!

As a card-carrying Apple fanboy, I was nerding out bigtime going into Apple’s headquarters. I realize it might be going a bit far, but I almost felt like I needed to take my shoes off because I was standing on holy Cupertino ground. (Can you say iDolatry?) But it was something I saw at the Facebook campus that left the biggest mark on me. The items in their vending machines were not labeled with their cost in dollars, as everything was free. Instead, the labels told their true cost: what it would take to burn off the food (for example: Snickers bar — twenty-five-minute bike ride).

I marveled at the wisdom. The food might be “free,” but it still costs you something. Nothing is truly free in this world. Weighing in the true cost of our choices is an incredibly powerful way to combat temptations that seem appealing in the moment. Nothing cools my head down faster than thinking about doing burpees. I don’t eat healthy because I like it; I eat healthy because I hate doing cardio.

WHEN ALL ELSE FAILS, RUN!

Limiting your access to temptation is the most straightforward way to avoid sin. But it is incredibly smart to have a plan in your back pocket in case of emergency. I suggest the following: when all else fails, run!

You can memorize Scripture, limit what you watch and read, and generally avoid temptation, but sometimes you’ll just get blindsided. There will come a day when you are trying to do the right thing, but all of a sudden, temptation smacks into you.

This happened to Joseph, my boy from the OT. Joseph had a hard life. He was sold into slavery by his older brothers. Every older brother has thought about it, but his went through with it! He ended up in Egypt, where he worked for one of Pharaoh’s government officials, Potiphar (Genesis 37:28, Genesis 37:36). No matter what challenges Joseph faced, he sought God and refused to swipe wrong. He could have said, “I’m gonna do what I want and have a good time. God doesn’t care about me.” But he didn’t. He knew that his life didn’t have to be going right in order for him to live right.

And then one day Potiphar’s wife came to him and said, “Hey, Joseph! I think you’re super good-looking. Let’s have sex!” And he’s like, “Whoa! Whoa! What the heck? No, I’m not going to have sex with you! That would be wrong. Wrong against your husband and wrong in the eyes of God” (Genesis 39:7-9, author’s paraphrase). But she wasn’t easily discouraged. She propositioned him over and over (Genesis 39:10), but Joseph wouldn’t have any of it. He went out of his way to avoid her.

So she stalked him. And once he was alone in the house, she made her move. She grabbed him by his jacket and said, “Let’s have sex right now! I’m not letting go of you until you take me” (Genesis 39:11-12, author’s paraphrase). By the way, this story is especially crazy because Joseph’s dad back in Israel thought Joseph was dead. Joseph’s brothers said Joseph had been killed by a wild animal, but the truth was, he was actually in Egypt, getting mauled by a cougar. The whole situation is very Real Housewives of the Ancient World.

Here’s what Joseph didn’t do: he didn’t say, “You know what? Let’s pray about this.” Instead, Joseph jumped out of his jacket and ran away. He ran. Why? Because he knew if he stayed in that house for one red-hot minute, he might have given in. So he got out of there.

And you must do the same. When you begin to feel tempted to watch what you shouldn’t watch, do what you shouldn’t do, or go where you shouldn’t go, then it’s time to go all 2 Timothy 2:22: “Flee also youthful lusts.” I love that verse, because the word translated “flee” is the Greek word pheugo. P-H-E-U-G-O: when you are in a situation where you are faced with temptation, “Foo,” you just got to “go!” There’s some gangster in the Greek.

Close the computer, cancel your cable, walk out of the movie (they will probably even refund your ticket price if you ask), delete the contact from your phone, break up with that person, change schools, or quit your job if you have to. Pluck out the eye, cut off the hand. Do something drastic to your sin, or sin will do something drastic to you. I know this all sounds way intense — and maybe it is — but know this: you can’t have a healthy soul and mainline toxic substances.

Keep your heart with all diligence, for out of it spring the issues of life. — Proverbs 4:23

You are what you eat. What you feed on, you’ll be full of.

Excerpted with permission from Swipe Right: The Life-and-Death Power of Sex and Romance by Levi Lusko, copyright Levi Lusko.

How can you prepare better to let “cooler heads prevail” in your life? When, for you, is it simply time to run? We’d love to hear your thoughts in the comments!