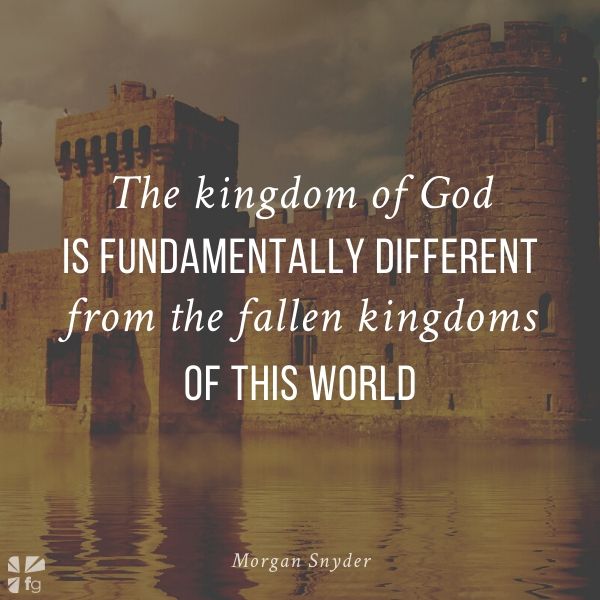 It is not what a man does that is of final importance, but what he is in what he does. The atmosphere produced by a man, much more than his activities, has the lasting influence.
— Oswald Chambers

Travel with me for a moment back to the narrow dirt roads of a first-century Roman military outpost. Imagine hand- sewn animal hide military tents, their interiors illuminated by the flickering glow of oil lamps, the fur-covered tent flaps barely holding at bay the chill of the evening wind. Inside this tent is the captain of a division of about eighty Roman soldiers, a centurion. Laying his sword and shield aside, the centurion is quietly kneeling next to one of his men, who is clearly in deep distress. Let’s pick up here with Matthew’s account of the story.

When Jesus had entered Capernaum, a centurion came to him, asking for help. “Lord,” he said, “my servant lies at home paralyzed, suffering terribly.” Jesus said to him, “Shall I come and heal him?” The centurion replied, “Lord, I do not deserve to have you come under my roof. But just say the word, and my servant will be healed. For I myself am a man under authority, with soldiers under me. I tell this one, ‘Go,’ and he goes; and that one, ‘Come,’ and he comes. I say to my servant, ‘Do this,’ and he does it.”

When Jesus heard this, he was amazed and said to those following him, “Truly I tell you, I have not found anyone in Israel with such great faith. I say to you that many will come from the east and the west, and will take their places at the feast with Abraham, Isaac and Jacob in the kingdom of heaven. But the subjects of the kingdom will be thrown outside, into the darkness, where there will be weeping and gnashing of teeth.”

Then Jesus said to the centurion, “Go! Let it be done just as you believed it would.” And his servant was healed at that moment.

Though a Gentile, this Roman centurion knew of one who had the power to heal his servant. Jesus’ reputation as a powerful healer had continued to spread in the region of Galilee and Syria (Matt. 8:4). In fact, the centurion had heard Jesus teach on several occasions, and he recalled that Jesus had recently gathered with a multitude of his disciples on a hillside above Capernaum. Gazing upon the rigid body of his servant, the centurion determined to find Jesus; he would risk seeking out the Jewish rabbi and asking him to heal this man under his care.

After Jesus entered Capernaum, the centurion found him. “My servant lies at home paralyzed, suffering terribly.”

Instead of responding with cultural spite, Jesus gazed into the eyes of this Gentile Roman soldier. The external identities of Jewish man and Gentile soldier were eclipsed by the superior reality of their identities in God’s kingdom. It was the King of kings gazing into the eyes of another king, in unity of soul and purpose under heaven. Jesus listened with absolute focus. Maintaining eye contact, he asked, “Shall I come and heal him?”

Notice the steadfastness of the centurion. He was neither confused nor unsteady, nor did he frantically provide Jesus with directions to the tent where his servant lay suffering. No. He had become the kind of man who was well acquainted in his soul with Jesus’ authority and the way in which his kingdom worked. With strength and conviction, the Roman captain matched Jesus’ gaze. Soul to soul. Brother to brother. King to king. In intimate heart knowledge, these two men united over the restoration of another. The centurion responded, “Master, just say the word, and my servant will be healed. For I myself am a man under authority, with soldiers under me. I tell this one, ‘Go,’ and he goes; and that one, ‘Come,’ and he comes. I say to my servant, ‘Do this,’ and he does it.”

That’s it. Period. In this very text is hidden some treasure that causes the heart of God to be astonished.

The Greek word conveying Jesus’ response is thaumazo, meaning “to marvel, have in admiration, to wonder.” This is the only instance recorded in Scripture when Jesus marveled at the faith of a man—and it is a Gentile, no less. What was it that caused Jesus to be amazed, astonished, to marvel at this man? What was it that Jesus saw inside the soul of this man that evoked such an unprecedented response from the King of kings?

Jesus, a Man Under Authority

As we contemplate the substance of the centurion’s faith (Heb. 11:1), what stands out is his recognition of and active reliance upon the reality of authority. This Roman soldier grasped what those in Israel, who were “supposed to know all about God and how he works” (Matt. 8:10 MSG), had missed: Jesus had supreme authority over all of reality, seen and unseen (Col. 1:16–20). The Gentile captain had become the kind of man who understood and walked in accordance with the nature of authority. He knew what it was like to have servants under him who followed his commands. He knew as well what it was like to have authority over him and to submit to leadership over his life. The centurion was familiar with the nature of authority, and he recognized Jesus as the One who has supreme authority over all things.

This faith-filled Roman centurion embodies this central treasure of the restored masculine soul: heroic strength in conscious submission to a greater authority. This submission is the Rosetta Stone of the masculine journey. The treasure of the kingdom is a man who is fully yielded to Jesus’ authority. A man who has given full consent for his King to lead him. A man who has crucified self-sufficiency in exchange for a reliance upon Trinitarian fellowship that empowers him to act in a manner that conforms to the will of God and makes a way for the impossible to become possible.

The Western worldview has done great harm to our understanding of authority. We live in a culture that deeply values self-sufficiency and is steeped in self-determination. Our culture cherishes the icon of the self-made man, and we spend most of our energy building, protecting, and preserving our personal kingdoms. Most of us have come to resent being under authority, because our experiences have confirmed the message that being under authority causes harm and constricts our liberty. Yet the kingdom of God is fundamentally different from the fallen kingdoms of this world. The kingdom of God prizes our willful consent to make the goodness, truth, and beauty of the true authority for which we were made under the care of God to be our ultimate refuge and seat of inextinguishable strength.

The thought that Jesus was not an independent man might be a new one. But the Scriptures are clear that the power and provision of His life flowed from union with his Father. He was dependent, not self-sufficient. Take Jesus’ words as recorded in the gospel of John: “I’m telling you this straight. The Son can’t independently do a thing, only what He sees the Father doing. What the Father does, the Son does. The Father loves the Son and includes Him in everything he is doing” (John 5:19 MSG). The Father and his Son are inseparable in action. Jesus wholeheartedly consents to His Father’s leadership over His life. And from that place, the reign of His Father flows into the lives of ordinary humans, allowing for the impossible to be made possible under Jesus’ leadership and care. Consent to and dependence upon His Father’s authority over all things is what Jesus knew. Intimate knowing is what He operated from. He knew He was a son; His identity was rooted in sonship.

Excerpted with permission from Becoming a King: The Path to Restoring the Heart of a Man by Morgan Snyder, copyright Morgan Snyder.

How does this idea of being “under authority” resonate with you personally? How is it different from what we see with most men in our society? We’d love to hear your thoughts in the comments!