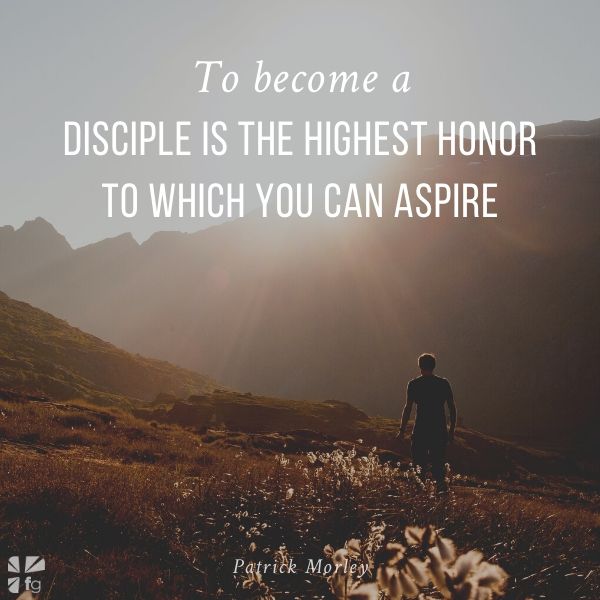 Do not conform to the pattern of this world, but be transformed by the renewing of your mind. Then you will be able to test and approve what God’s will is—his good, pleasing and perfect will.
— Paul to the Romans, Romans 12:2

On Friday mornings, I teach men at The Man in the Mirror Bible Study. After the message, the men sit around tables and discuss the topic of the day. While they unpack the lesson, I meet with our first-timers and spend a few minutes giving them the lay of the land.

Then I ask each visitor to take a few minutes to answer the question, “Where are you today on your spiritual journey?” Their answers roughly fall into three categories.

The first kind of man we might call a seeker or inquirer, a man who really doesn’t know God yet in a personal way through His Son, Jesus, but who for whatever reason feels drawn to investigate the Christian faith.

The second kind of man we might call a new Christian, a man who recently made a profession of faith and now wants to figure out, “What did I just sign up for?”

The third kind of man let’s call a longtime Christian, a man who has known God for a while — maybe several years — but is sensing a need to mobilize or remobilize:

• Maybe he was in a Bible study once but hasn’t been in one for a while.
• Maybe he’s looking for a place where he can build some friendships with like-minded men.
• Or perhaps he’s a man who made a profession of faith at a younger age but has spent the last five, ten, fifteen, or more years living by his own ideas. His life has not turned out the way he planned. He has realized, or is beginning to realize, that he either needs to get to, or back to, a more biblical Christianity.

As different as they are, what all these men have in common is a deeply felt hunger to know more about God. In fact, spiritual growth was the number one issue cited by the twenty-four men who helped storyboard The Christian Man.

THE GOAL OF SPIRITUAL GROWTH

You’ve probably heard someone say, and maybe you’ve said it yourself, “I knew about God, but I didn’t know God.”

However, it’s also true that a lot of men can say, and maybe you too, “I know God, but I don’t know about God.” Yes, there has been a profession of faith, but they feel like children stuck in elementary school. They believe the Gospel — they know God. But they want — and need — to take the next step.

What is the next right step? When Jesus gave us His last or nearly last words, He uttered the single most impactful speech ever recorded in the history of the world. More millions of people and billions of dollars have been mobilized by this short speech than any other, and there isn’t a close second:

“All authority in Heaven and on earth has been given to Me. Therefore go and make disciples of all nations, baptizing them in the name of the Father and of the Son and of the Holy Spirit, and teaching them to obey everything I have commanded you. And surely I am with you always, to the very end of the age.” — Matthew 28:18-20

We call this well-known text the Great Commission. It’s “great” because becoming a disciple is the “normal” way God has ordained to release the power of His Gospel on your problems and opportunities.

This leads us to ask the question: What is a disciple, and how do you become one?

What Is a Disciple, and How Do You Become One?

The Greek word for disciple is mathetes, which literally translates “pupil” or “learner.” When attached to Jesus, the term disciple has come to mean someone who follows and adheres to the person and teachings of Jesus.

Here’s a biblical and actionable way to think about what it means to be a disciple. A disciple is:

Let’s elaborate on these three aspects.

Called to Live “In Christ”

In theology, “knowing God” pertains to the Greek word kerygma, which stands for “the proclamation of the gospel.” It’s knowing enough about the birth, life, death, and resurrection of Jesus to believe the good news through faith and repentance. The first step to become a disciple is to believe the kerygma. But as the writer of Hebrews noted, the call to live in Christ amounts to “elementary teachings”:

Therefore let us move beyond the elementary teachings about Christ and be taken forward to maturity, not laying again the foundation of repentance from acts that lead to death, and of faith in God. — Hebrews 6:1

At some point on his journey, every Christian man wants to move beyond the elementary teachings. He feels a pang in his heart to grow in maturity, love, knowledge, wisdom, humility, and power. He wants to experience and exhibit all the fruit of the Holy Spirit — His love, joy, peace, patience, kindness, goodness, faithfulness, gentleness, and self-control (Galatians 5:22-23 ESV). He can no longer be happy only knowing God. He feels compelled to know about God too.

The “knowing about God” part of theology pertains to the Greek word didache, or “the teachings.” What many men are saying is, “I have put my faith in Christ. I know Him. But now I want — no, I need — to know more about Him. I want to grow into a more kingdom-minded man.”

Men desperately need “the teachings.” Not only do they tell us what we want to know about God, the teachings also give us wisdom and guidance for our marriages, families, friendships, work, sexuality, culture, and personal ministries — the seven issues that occupy the remaining chapters of this book — and for every other thing.

To be a Christian and not be discipled into “the teachings” is like a man joining the army and being issued a rifle that he never learns how to clean and shoot. He will not be of much use to himself or those around him on the day of battle.

Evangelism without discipleship is cruel.

Sent to Live “for Christ”

As a man eventually fills up to the overflow in his personal relationship with Jesus, he will come to a point when he feels he not only has enough Jesus for himself, but an “excess” that he can share with others. A spirit of gratitude suddenly compels him to do all the good things he has ever wanted to do but for which he previously lacked the power.

A young Dwight L. Moody, who became one of the most famous Christians of the late 1800s, was such a man. One day he heard, “The world has yet to see what God will do with and for and through and in and by the man who is fully and wholly consecrated to Him.”

Moody thought to himself, “He said a man… he did not say a great man, nor a learned man, nor a rich man, nor a wise man, nor an eloquent man, nor a ‘smart’ man, but simply ‘a man.’ I am a man, and it lies with the man himself whether he will or will not make that entire and full consecration. I will try my utmost to be that man.”1

Overwhelmed by his growing knowledge and experience of Christ’s love, grace, and mercy (his discipleship), Moody felt compelled to live out to the ends of his fingertips for Jesus!

He became the hero of his story. And by making “that entire and full consecration,” so can you.

Excerpted with permission from The Christian Man: A Conversation About the 10 Issues Men Say Matter Most by Patrick Morley, copyright Patrick Morley.

How do you feel like you have grown in discipleship throughout  your life? How can you begin to “know God” and “know about God” more? We’d love to hear your thoughts in the comments!