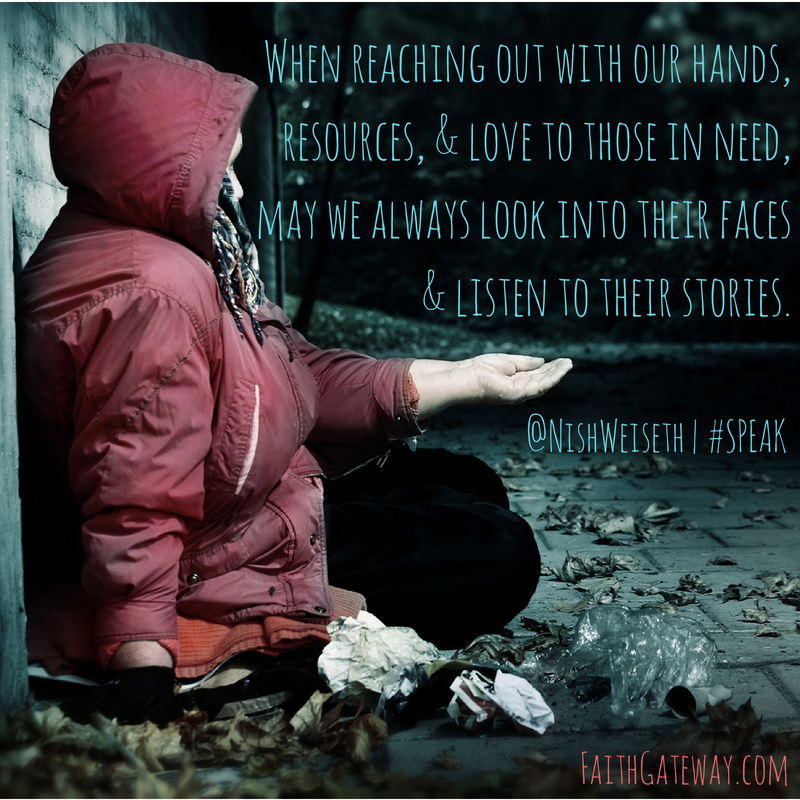 Our generation is suffering from poverty fatigue.

The problem of poverty fatigue isn’t with the organizations doing the work. Rather, the problem is with our inability to connect on a deeper level with those in need.

So how do we create a lasting connection to the poor – the ones Jesus called the least of these – in a sustainable, life-changing way? How can we actually work to eradicate the crippling effects of poverty on children, adults, and communities around the world?

We need to recalibrate our passions to begin with a person. That happens as we start seeing those stricken by poverty as one of us rather than as the other. A common thread of humanness runs through all of us, and we simply need to find the thread that connects us. The problem of eradicating poverty is not about the lack of funding or a marketing strategy. The problem with eradicating poverty is the rampant disconnection between the haves and the have-nots. So when we sit with people and listen to them – about their needs, desires, dreams, expectations, hurts, and experiences – that’s when things change.

Addressing poverty in this way isn’t simply because it’s smart strategy or it makes us feel better about ourselves, or even because it’s the most efficient.

We meet the needs of those in poverty by hearing from them first, because it’s one of the best ways to display the love of Jesus as we know Him in Scripture.

In the gospel of Luke (Luke 18:35-42), Jesus and those around Him came upon a blind man on the side of the road to Jericho. The blind guy was begging. He had nothing. The crowd surrounding Jesus started to get closer to the man as they walked down the road, and he asked a passerby what was happening.

And with that, the blind guy sitting on the side of the road called out to Jesus. I mean, really called out to Him. He’d have to yell pretty loudly, given the crowd of people surrounding Jesus on the road. And he didn’t just yell, “Hey, Jesus!” He called out to “Jesus, son of David,” implying that he knew exactly who Jesus was and what He was capable of. “Have mercy on me,” the blind man implored Him. The people in the front of the moving crowd kept trying to hush him, to keep him quiet as Jesus walked by, but he persisted. “Jesus, Son of David, have mercy on me!” You can almost hear the desperation and need in his voice in this portion of text.

Jesus didn’t look to someone else in the crowd and ask, “What does that guy want?” Nor did He ask someone else to help the man get what he needed. Jesus stopped and had the man brought right to Him. Right to His face! And Jesus spoke directly to the beggar. He asked him what He could do for him, and the blind man told Jesus he wanted his sight back.

And the man received his sight because he had faith. Jesus healed him Himself. He’s God. He could have had any number of His disciples heal the blind man that day, but Jesus healed him.

Everyone around Jesus was looking down on the man sitting in the dirt, telling him to be quiet. The text here says they were the ones leading the way, and I imagine Jesus being somewhere in the middle of the crew or possibly near the back. I love the visual of Jesus stopping in His tracks to speak to this man after everyone had already overlooked him. And being the Son of God, He certainly knew what the man needed before he even opened his mouth to speak. But Jesus asked anyway, “What do you want me to do for you?”

He listens as He looks into eyes and faces. He reaches out to the person – the whole person – and meets their need.

And may it be so with us. When reaching out with our hands, resources, and love to those in need, may we always look into their faces and listen to their stories.

Even though it can seem like the voices of those on the margins have been silenced, may we remember that they haven’t been. They have stories, lives, and experiences too. Sometimes it’s our job to simply be a microphone, offering our volume, influence, and privilege for the sake of those who need it most. I pray we are reminded that those of us with privilege and influence have the ability to share those stories to impact change. Every person’s story deserves to be heard and told.

May we be the hands and feet of Christ as we sit and listen and tell the stories of the least of these.

Excerpted with permission from Speak by Nish Weiseth, copyright Zondervan, 2014.

Who comes to mind when you think of the phrase “the least of these”? Is there someone in your circle who is marginalized, ignored, needy, or alone? How can you serve that person today? Leave a comment on our blog! We’d love to have you join the conversation! 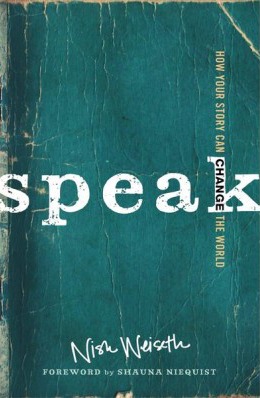