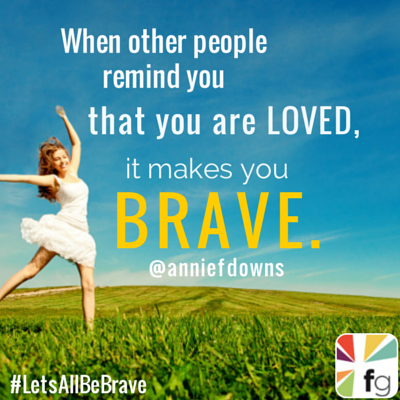 I love my people.

I could write an entire book on that, which probably means this is going to be too long, but I don’t care. I want to live brave. So I pursue opportunities and look for God’s open doors, but I only can because I have people who love me and with whom I belong.

We all need that.

In February 2009, I had only lived in Nashville a few months, but I had managed to finish writing a book, make some friends, and blow through my savings. I was really poor — I mean, barely getting by, having to ask my parents for money, carpooling to save gas, selling-things-on-Craigslist poor. And so were a lot of my friends. That year, many of us were on the first few steps of our creative careers, and those first few steps look like shuffling in the porridge line with Oliver Twist. I nannied. I worked at a restaurant called The Local Taco. I took jobs I found online for editing or writing copy. And yet ends just weren’t meeting.

My friends felt it in their lives too, and the most frustrating thing, especially in a town like Nashville that is full of young adults who have moved here on their own to chase their dreams, was that we all wanted to be together. We didn’t want to eat at home alone, but we couldn’t afford to eat out.

And so began family dinner.

Our Sunday ritual started out simple enough. Much like the classic children’s tale Stone Soup, we all brought what meager things we could in attempts to turn out a decent meal. Jason brought a pound of ground beef. While Laura browned it, Emily chopped an onion. We boiled noodles and added carrots (thank you, Claire) and a variety of fresh garden veggies (from Joel, who is a famous songwriter, so he’s rich enough to buy fresh vegetables). And with a lot of water, that soup satisfied us.

Evan makes the meanest grilled cheese sandwich this side of the Mississippi. Thanks to Betsy, who brought a block of sharp cheddar cheese; Marisa, who provided a loaf of bread; and my garlic salt, we all ate our fill.

There would be a flurry of replies throughout the afternoon as to who was bringing what. I would check in before my weekly Sunday nap and wake up with the typical end result: Joel was bringing something fancy, and I was hosting again.

It wasn’t always a perfect setup. When you fill a family with young artists pursuing their dreams, emotions tend to run higher than usual (creatives are known for that) and people get their feelings hurt. There were times when friends got left out or too many people showed up but forgot food to share so there wasn’t enough to feed everyone.

But for months, our tradition lived. We made room for each other every week. We prioritized each other — with our time, our money, and our groceries. We managed our budgets all week long so we could make sure we’d have enough left over for the lettuce or the cheese or the burgers — for whatever we volunteered to provide.

There was a night in the spring when grilled chicken salads were on the menu. The lights strung from the corners of my back porch were making the whole night hazy. The girls sat out there and laughed as they watched the boys test the strength of the tire swing in the backyard.

I’m sentimental about 2009. Someone recently pointed out I am above average in sentimentality and below average in the ability to control my tears when feeling said sentimentality. Ask, well, anyone. But 2009 is so stuffed with memories of people and times together that it just gets me worked up. When I think back on those Sunday nights, I feel emotional. We started as a group of church-mousepoor friends who just wanted the ability to afford to eat meat, and then as we worked and got better jobs, family dinners lived on — and we lived like a family.

That group of people became a weekly community for me — over Skip’s tacos or Jason’s grilled chicken or Laura’s angel food cake or Evan’s grilled cheese sandwiches (which are good enough to get emotional over all by themselves). Sunday nights fed my body and my soul.

I belonged there. I think that’s what I need most to be brave — a place where I belong. And you only find that place when you find those people, whether it’s singing about America in an elementary school closet or hovering over a warm pot of soup ready to feed twenty.

No one is brave alone.

Every superhero has someone they come home to; every Bible character has someone they depend on. Jesus had his disciples and his family. Batman had Robin. Paul had Barnabas. Ruth had Naomi. The Incredibles had each other; Superman had Lois Lane. Moses had Aaron, Hur, and Miriam. Noah had his family. So we see modeled, even in the Bible, the truth that the bravest among us do not stand alone.

My two best friends, Haley and Molly, have been there for me over and over again since we met as kids at church.

Whether I actually was brave or a wimp in need of a hug or a Coke Icee, they stood beside me. We’ve walked through highs and lows — immense pain and worry and illness and betrayal and also weddings and babies and laughter and years upon years of every emotion. They have been brave for me and with me. I hope I have done the same for them.

I think it’s really nice when other people remind you that you are loved. It makes you brave.

I had lived in Nashville for approximately twenty days in 2008 when I drove home to Marietta for a wedding. People had barely missed my presence, but it was like breathing again for me to be in a town where I was known and loved.

The weekend flew by, and suddenly it was Sunday night and I needed to head back to Nashville.

I stood at the front door weeping into my dad’s arms.

I just couldn’t go back. It was too hard, too different, too empty. “Okay,” Dad said, “you don’t have to. We’ll figure out a way to get your stuff back down here and you can stay. We’ll hire movers or something. We’ll work it out. But is that really what you want?”

I knew it wasn’t. I knew God was giving me the chance to be brave, and in some roundabout parental wisdom and hijinks, my dad was doing the same. I knew in the conversation that he was going to love me either way — stay or go — and that he and my mom would support either decision. I knew it was breaking their hearts to see me so distressed and sad. And yet Dad offered me a chance to be a wimp and offered me a chance to be brave. Where it might have felt better for all of us if I had stayed home, Dad didn’t make that the only option. He could have. Many parents do. But he didn’t. His words gave me a choice. His love told me to be brave.

Somehow I drove away that day. Probably because my parents told me I didn’t have to.

You may already have a list of people who love you growing in your mind. Or maybe you’re still spinning your wheels to think up just a few. Maybe today is a good day to figure out who loves you. Their love will give you courage.

Maybe today is a good day to tell the ones you love that you love them. Your love will give them courage, like a deposit in the bank of the heart. I don’t know how it works, the science and math of it all, but I know that love given is courage gained.

When I decided to pursue writing as a career, my friend Shannon told me about a conference in California called the Mount Hermon Christian Writers Conference. She said we should go together. I was an absolute newbie with no idea what I was doing, but if Shannon said we should go, I was going to go.

I booked my flight and my hotel — and then? Shannon couldn’t go.

It was one of those phone calls you absolutely do not want to get when you are already feeling totally wimpy and like you want to hide and forget about the whole thing. But I couldn’t. The money was paid. I wanted to be a writer, and so I was going.

I knew no one — I mean, no one. But my friend Kathleen had found out that a blogger she liked was going — Melodee.

So she sent me Melodee’s picture and said, “Find her and be her friend.”

I didn’t have any better ideas, and Melodee’s blog made her seem like a nice person, so at lunch on my first day alone at a writer’s conference in California, I stalked her until I found her, walked up to her table, and pretty much asked her to be my friend. It was terrifying. Sitting with her were two other women who were legitimately Melodee’s friends — Sarah and Linda. Also at the table was a dude named Brad, who had come alone — a pastor from Canada.

They invited me to join them, so I did.

And for the rest of that writers’ conference, a full week, we were inseparable. We were the Hermonistas. And we belonged together; we belonged to each other; we had people.

But how to find them — the people who will stand with you and hold up your arms or cover your mouth when you should shut up — seems to be the challenge. The people are easier to identify than you may realize — you just follow your path and look around, because the brave ones? They are the ones parallel to you. They are your people.

Just like every other hobby — panning for gold or mountain biking or baking or book clubbing — you step toward the thing that scares you and you do it and then you look around. Those people standing beside you? They are brave too. They must be to be walking alongside you on the courageous path.

Excerpted with permission from Let’s All Be Brave by Annie Downs, copyright Zondervan, 2014.

Watch the Video for Let’s All Be Brave

Being loved makes a remarkable difference! We were created for relationships and we thrive in community! Remember that line from Telly Savalas — “Who loves ya, baby”? That’s my question to you today! Who loves you? Who are your people? Have you found them yet? Sometimes they may not be the ones you hoped for or expected. But, they’ve been there for you when you needed them, they’ve loved you, and helped you to be your bravest self when you wanted to quit or didn’t have enough strength on your own. Who are the people who have been Jesus’ Hands and Feet for you? Who has stuck with you? Who shares life with you? Who lifts you up? Who helps you be brave? Come join the conversation on our blog! We would love to hear from you! ~ Laurie McClure, FaithGateway Women