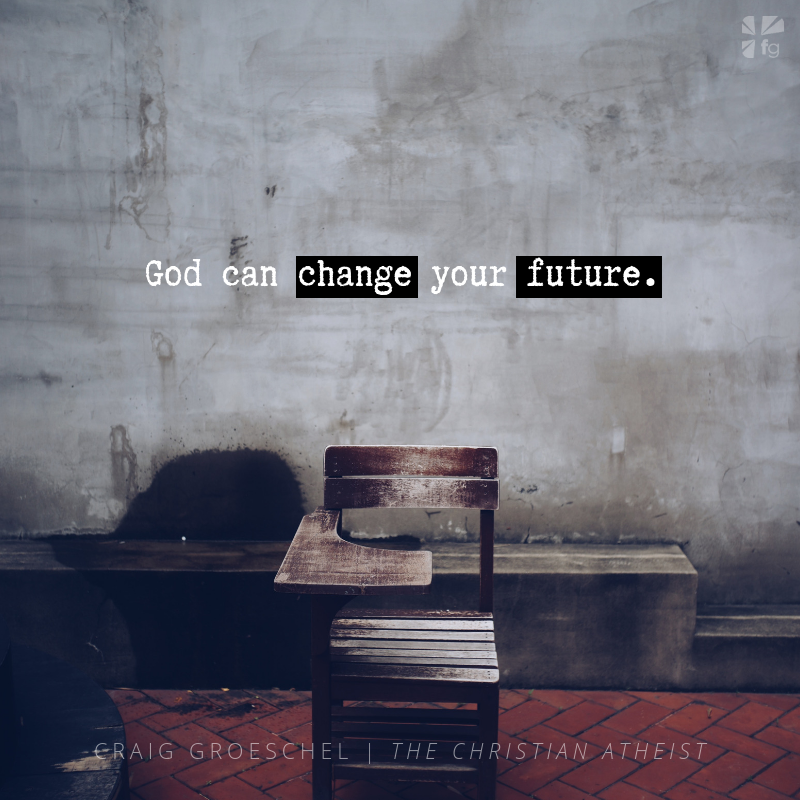 As a pastor, I’ve discovered that many people are dying slowly in a secret tomb of shame. Some are ashamed of their poor financial condition, plagued with guilt about their irresponsible spending and debt. Others are ashamed about sexual sin from their past. Many carry extreme guilt with them into their future relationships. Countless people are crippled by the shame of secret addictions. Some people even live with false guilt after suffering as victims of sexual abuse.

Shame usually follows a pattern — a cycle of self-recrimination and lies that claims life after life. First, we experience an intensely painful event. Second, we believe the lie that our pain and failure is who we are — not just something we’ve done, or had done to us — and we experience shame. And finally, our feelings of shame trap us into thinking that we can never recover — that, in fact, we don’t even deserve to.

A few years ago, our church built the website www.mysecret.tv, where people could anonymously confess to anything and invite others to pray for them. Many of the gut wrenchingly honest confessions recorded there illustrate the lies of the shame cycle that hurting people believe.

One girl wrote, “I was raped when I was nine, and for some time I messed around with other boys sexually. I’m ashamed of this and have only told two people about the rape. I know I was just a child, but it still makes me think I’m a horrible person. Because of what I did, I feel dirty and don’t think anyone will really love me.”

A young man confessed, “I videotaped my little sister undressing. Thank God she caught me the very first time. I got into huge trouble and I’m glad I did. Otherwise, I could have traveled down a very bad path. I’ve never done anything like that again, but I hate myself for what I did. I feel like I ruined my whole family. My sister hates me. My family hates me. Everyone hates me. I’m a monster.”

When our past pain becomes our present identity, the shame cycle has claimed yet another victim.

Like a child who repeatedly picks at a scab, many hurt people live a life of unhealed pain.

Finding a Way Out

Please understand that there is a way out of the cycle. It is different for each person, but it is also possible for each person, by the grace of God, no matter how uniquely and irreversibly crippling that person’s shame might feel.

When we let shame control our actions, we cannot know God, because we cannot live our lives for him. Christian Atheists may live as if God doesn’t exist because, in their cycle of shame, it doesn’t seem as if He does.

One of Jesus’ disciples, Peter, broke out of his prison of shame, although the struggle was long. Jesus had predicted this fisherman-turned-disciple’s betrayal, and Peter immediately and passionately denied that he’d ever turn on Jesus.

“I’ll stand faithfully by you until the end,” he insisted.

Unfortunately, real-life events soon proved Peter wrong. A rooster’s crow reminded Peter of his denial, forcing him to face his crushing triple failure. Yet Peter refused to believe the lie that his betrayal now branded him a traitor. Broken and repentant, Peter cried out to God for forgiveness. After His resurrection, Jesus honored Peter’s desperate plea. Jesus’

forgiveness and restoration gave Peter a renewed passion, and the courage to preach a daring message at Pentecost and become one of the fathers of the Christian church.

His failure — transformed from tragedy into triumph through Peter’s repentance and God’s forgiveness — became a character-building lesson that led the way to kingdom victory.

Breaking the Shackles of Shame

Like Peter, Christian Atheists can break free from the cycle of shame.

We live lives of private defeat, but God wants to renew our hearts and minds and to send us into His world as lights shining in the darkness. Like Peter, we can become convinced of the truth: namely, that we are not our sins. And we’re also not what others have done to us.

Rather, we are who God says we are: His children. We are forgivable. We are changeable. We are capable. We are moldable. And we are bound by the limitless love of God.

The first step to overcoming shame is to accept that which cannot be changed.

In the Old Testament, King David seduced his friend’s wife, impregnated her, and used his power to ensure that his friend was killed in battle. A trusted confidante named Nathan later confronted David about his sin. David must have felt he had every reason to listen to the lies of shame. But instead of giving in to a lifelong spin cycle, he brought his past into the open, hoping to find a way forward. Psalm 51 records the beautiful repentance of a fallen king:

Have mercy on me, O God, according to Your unfailing love; according to your great compassion blot out my transgressions. Wash away all my iniquity and cleanse me from my sin… Create in me a pure heart, O God, and renew a steadfast spirit within me. Do not cast me from Your presence or take Your Holy Spirit from me. Restore to me the joy of Your salvation and grant me a willing spirit, to sustain me. — Psalm 51:1-2, Psalm 51:10-12

David didn’t try to pretend he was innocent — he was honest. But neither did he allow the guilt trap to rob him — or God — of the joy of a life redeemed and restored. He knew he couldn’t change the past, but he hoped he could change the future.

When we hope in what God has promised — commanded — our hope is the same as certainty.

Just before surrendering my life to Christ in college, I made a bad decision, one that was all too similar to David’s. I was dating a sweet Christian girl, and because I wasn’t a Christian, I gave in to a destructive temptation. At the time, I was the president of my fraternity and had a “little brother,” a younger fraternity member under my care. He too had a serious girlfriend. One night at a party when he was out of town, his girlfriend made advances toward me. I resisted at first, but after a few more drinks, I betrayed my girlfriend and my little brother. Within a matter of days, our hookup became public knowledge, and I went from being a respected leader to a despised traitor. Life as I knew it was over.

I didn’t see how anyone could be salvaged after committing such a betrayal. Yet I feared enough — and dared to hope enough — for my future that I somehow allowed my sin to drive me toward God, rather than farther away from him. By God’s grace, instead of turning inward to a prison of shame, I turned upward to the God of healing and hope.

With the help of a wise friend, I realized that although I couldn’t undo what I had done, I could do the right things from that point forward. My attempt at restitution started with several genuine apologies. I wasn’t surprised to discover that the people I wounded didn’t immediately forgive me. But my repentance was the first step in the right direction. And even though my attempts to make amends didn’t instantly heal our broken relationships, they did help start the healing of my own inner brokenness. Over time, because of the restoring power of Christ, we became friends again.

For many, it is difficult to accept that the past has passed. Sometimes, it’s so hard just to leave it there, where it belongs. But until we do, we cannot make peace with the present or walk into the future with hope.

Once we accept the unchangeable past, we must embrace that God can change our future.

While we may always remember what happened, we need to believe that we are not what happened. We are who God says we are — new creations (2 Corinthians 5:17). When we reject what our shame says about us, we can finally hear what God says about us. He is working in all things to bring about good in our lives because we love God and are called according to his purposes (Romans 8:28).

Even though Rebecca, a faithful volunteer at our church and the mother of two children, seemed happy, she guarded a dark secret. For years, Rebecca would eat whatever her heart desired, only to secretly retreat to a restroom and regurgitate her meal. Ashamed of her struggles, she somehow managed to keep this sickness hidden from everyone. Assuming her three-year-old wouldn’t pick up on what she was doing, she allowed her impressionable daughter to walk in once as she gagged herself. Rebecca never imagined that her child would start to mimic her by sticking her finger down her throat. When the small girl continued, Rebecca realized it was time to come clean about her struggle.

I’ll never forget her tears as she confessed to several of us from the church. Rather than turning away from her, everyone — including her husband — quickly embraced her. Rebecca willingly sought help from a Christian counselor and slowly pushed through the darkness of her pain to the healing light of Christ. Thankfully, God has turned this previous struggle into a ministry. Rebecca openly admits to her past challenges and has helped several different women who have lived in the same private darkness.

If you are living with a secret shame, God can do a similar miracle for you. And when He does, we can be even better than new! Once a broken bone heals, it is often strongest at the point of the fracture. In the same way, God can take the shame of past failures and amazingly redirect their outcomes toward your future success. I betrayed my college friends. In fact, I routinely cheated on girlfriends. Deep down I wondered if I could ever be faithful to one woman in marriage. By God’s power, He took the shame of my past, forgave me, and made me better than new. My one-time weakness was replaced with an equal and opposite strength. My faithfulness to my wife, in every respect, is an important part of my story. What was previously a deep sense of sin and shame, God used for good. He’s eager to do the same in you.

Watch the Video for The Christian Atheist

Excerpted with permission from The Christian Atheist: Believing in God but Living As If He Doesn’t Exist by Craig Groeschel, copyright Craig Groeschel.

God is ready and willing to turn your shame into your strength! Are you ready to let go of that shame, repent to those you’ve hurt, and give it to Him? Come share with us on our blog. We want to hear from you about allowing the Lord to change your future!