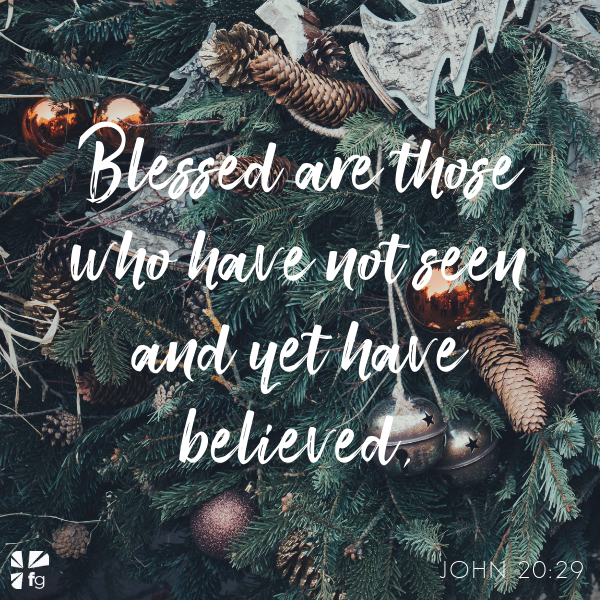 Editor’s Note: It’s Sit & Listen Saturday at Devotionals Daily. Enjoy reading as well as listening to this devotion from Streams in the Desert by L. B. E. Cowman. Listen on the blog below or on your Alexa device by enabling the skill and then prompting, “Alexa, ask devotionals to read today’s devotion.”

Whatever you ask for in prayer, believe that you have received it, and it will be yours. — Mark 11:24

When my little son was about ten years old, his grandmother promised him a stamp collecting album for Christmas. Christmas came and went with no stamp album and no word from Grandma. The matter, however, was not mentioned, until his friends came to see his Christmas presents. I was astonished, after he had listed all the gifts he had received, to hear him add, “And a stamp album from my grandmother.”

After hearing this several times, I called my son to me and said, “But George, you didn’t get a stamp album from Grandma. Why did you say you did?”

With a puzzled look on his face, as if I had asked a very strange question, he replied, “Well, Mom, Grandma said, and that is the same as.” Not a word from me would sway his faith.

A month passed and nothing else was said about the album. Finally one day, to test his faith and because I wondered in my own heart why the album had not been sent, I said, “George, I think Grandma has forgotten her promise.”

“Oh no, Mom,” he quickly and firmly responded. “She hasn’t.”

I watched his sweet, trusting face, which for a while looked very serious, as if he were debating the possibility I had suggested. Soon his face brightened as he said, “Do you think it would do any good for me to write Grandma, thanking her for the album?”

“I don’t know,” I said, “but you might try it.” A rich spiritual truth then began to dawn on me.

In a few minutes a letter was written and mailed, as George went off whistling his confidence in his grandma. Soon a letter from Grandma arrived with this message:

I have not forgotten my promise to you for a stamp album. I could not find the one you wanted here, so I ordered one from New York. It did not arrive until after Christmas, and it was not the right one. I then ordered another, but it still has not arrived. I have decided to send you thirty dollars instead so that you may buy the one you want in Chicago.

As he read the letter, his face was the face of a victor. From the depths of a heart that never doubted came the words, “Now, Mom, didn’t I tell you?” George “against all hope… in hope believed” (Romans 4:18) that the stamp album would come. And while he was trusting, Grandma was working, and in due time faith became sight.

It is only human to want to see before we step out on the promises of God. Yet our Savior said to Thomas and to a long list of doubters who have followed, “Blessed are those who have not seen and yet have believed” (John 20:29). ~ Mrs. Rounds

Excerpted with permission from Streams in the Desert by L. B. E. Cowman, copyright Zondervan.

Can you imagine having the same depth of assurance in the promises of God as George had in his grandma’s promise of stamp album? How much more trustworthy is our Lord? How much more does the Lord love us that a grandparent, or parent, or any other human being? How much more lavish is He than any person could possibly be?  Come share your thoughts with us on our blog! We would love to hear from you about believing in faith! ~ Devotionals Daily