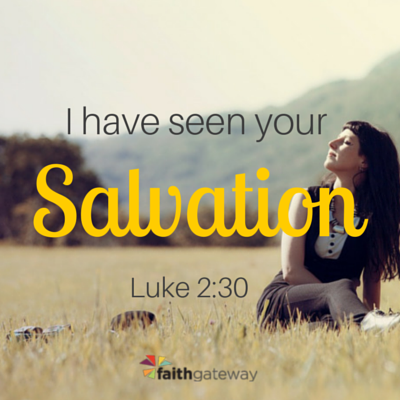 When the eighth day arrived, the day of circumcision, the child was named Jesus, the name given by the angel before He was conceived.

Then when the days stipulated by Moses for purification were complete, they took Him up to Jerusalem to offer Him to God as commanded in God’s Law: “Every male who opens the womb shall be a holy offering to God,” and also to sacrifice the “pair of doves or two young pigeons” prescribed in God’s Law.

In Jerusalem at the time, there was a man, Simeon by name, a good man, and a man who lived in the prayerful expectancy of help for Israel. And the Holy Spirit was on him. The Holy Spirit had shown him that he would see the Messiah of God before he died. Led by the Spirit, he entered the Temple. As the parents of the child Jesus brought Him in to carry out the rituals of the Law, Simeon took Him into his arms and blessed God: God, you can now release your servant; release me in peace as you promised. With my own eyes I’ve seen your salvation; it’s now out in the open for everyone to see: A God-revealing light to the non-Jewish nations, and of glory for your people Israel.

Jesus’ father and mother were speechless with surprise at these words. Simeon went on to bless them, and said to Mary His mother, This child marks both the failure and the recovery of many in Israel, a figure misunderstood and contradicted – the pain of a sword-thrust through you – but the rejection will force honesty, as God reveals who they really are.

Anna the prophetess was also there, a daughter of Phanuel from the tribe of Asher. She was by now a very old woman. She had been married seven years and a widow for eighty-four. She never left the Temple area, worshiping night and day with her fastings and prayers. At the very time Simeon was praying, she showed up, broke into an anthem of praise to God, and talked about the Child to all who were waiting expectantly for the freeing of Jerusalem. – Luke 2:21-38 MSG

The Heart of His Story

I think one of the sweetest gifts God gave during His Son’s earthly ministry happened when Jesus was only eight days old.

He bequeathed it to two people — a man named Simeon and a widow named Anna. Simeon’s age isn’t specified, but Bible scholars presume him to be elderly, in light of the phrase, “The Holy Spirit had shown him that he would see the Messiah of God before he died,” which would be a weird biblical footnote if he had been a young man. Also, his “Okay, I can die happy now” response after meeting the Christ child: “God, you can now release your servant; release me in peace as you promised,” implies his advanced age. Anna is verifiably old because, if you do the math, she was married for seven years and had been a widow for eighty-four. So, assuming she married around fourteen, as most good Jewish girls at the time did, she was at least 105!

Luke explains that both of these elderly people hung out at the Temple a lot because of their devotion to God. But given their AARP status, I can’t help wondering if they were a little lonely as well. They probably didn’t have anyone to go home to. No one to talk to at the dinner table. No one to sit on the couch with and watch Hebrew Idol. Nothing in their tidy apartments at the City of God Retirement Center to keep them company but a tabby cat and cataracts. So they puttered around the church everyday, praying at the altar, hobbling back and forth on errands for the priests, carrying boxes of candles up from the basement, and carefully rubbing each pew with linseed oil until it gleamed. Temple regulars grew accustomed to always seeing the white-haired gentleman wearing high-water khakis and the nice old lady who smelled like Pledge.

Most worshipers didn’t give Simeon and Anna any more thought than they did the shiny pews or the plentiful supply of candles up front.

But then one day a teenaged couple walked in the front door of the Temple. The young husband was wearing tattered but clean jeans and seemed to have birds squawking in his backpack. While his wife — she couldn’t have been more than fifteen! — was carrying what looked to be a brand new baby. They shyly approached Simeon, and the young man cleared his throat and said, “I’m sorry to bother you, Sir, but can you tell us where to go to give God an offering on behalf of our little Boy?”

Simeon put down his mop and took a deep breath to steady himself. Then he reached his gnarled hands toward the new mom and asked gently, “May I hold him?”

Mary nodded and handed the newborn Son of God to Simeon. He cradled the pink-cheeked Messiah for several minutes and then began to sing a praise chorus he made up years before but had never actually sung out loud.

Anna, who had been in the women’s restroom the whole time, refilling the paper towel dispenser, shuffled back toward the sanctuary when she heard Simeon’s baritone voice warbling, thinking, What’s that old goose up to now? His voice rose in pitch as she wobbled her way there, causing her feeble heart to skip a beat. She didn’t know Simeon was singing; she was afraid he had fallen down and broken his hip again, until she turned the corner and saw her dear old friend’s enraptured countenance. Then she saw the Baby in his arms and, realizing immediately the miracle that was taking place, she ran toward Him with the speed and agility of a girl!

Hope For Our Ongoing Stories

Day after day, year after year, Anna and Simeon accepted and appreciated the diminutive joys that came their way. Some place to go to volunteer and feel useful. A friend with whom to share their umbrellas and their prayer requests. Free WiFi in the Temple lobby.

I can’t help wondering if their willingness to recognize the sweet, little gifts Jehovah blesses us with each and every day is part of why He chose them to be recipients of the same incomparable surprise Present He gave the shepherds wandering in their fields by night. Good news and great joy — the Savior of the world wrapped in an ordinary blanket.

Excerpted with permission from Stumbling Into Grace by Lisa Harper, copyright Thomas Nelson, 2012.

The long and patient faithfulness of Simeon and Anna is a beautiful example for us who are similarly waiting for the Savior of the world to arrive! What sweet, belated Christmas gifts and diminutive joys are you thankful for today during your wait? Come join the conversation on our blog! We would love to hear from you! ~ Devotionals Daily