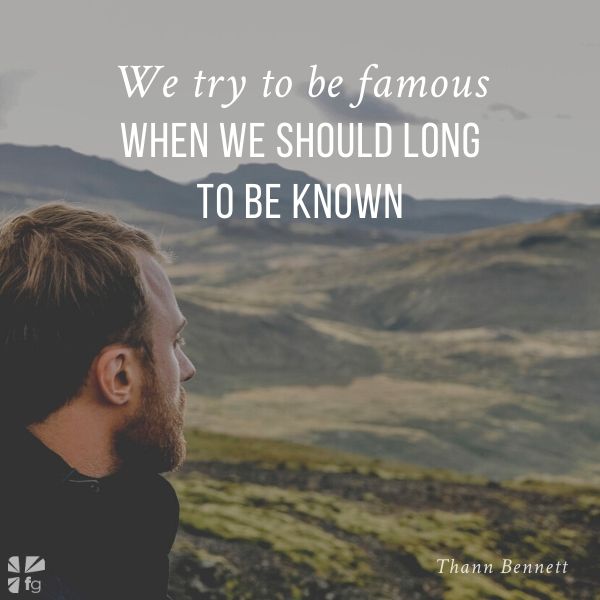 If we are going to walk in the fame for which we were created, it will require that we learn to distinguish between His fame and the fame of this world.

But whoever loves God is known by God. — 1 Corinthians 8:3

We have established that we were created to pursue, possess, and even channel fame, but we have so frequently misallocated where that accumulated fame is to reside. There is an ever-present clash of ideals between what it means to be famous and what it means to be known. If we are to have any success in our pursuit of His fame, it will require that we reorient ourselves toward His design. He desires that we be fully known by and hidden in Him. He desires that we pursue knowledge of His face and a dedication to His fame. These two objectives go hand in hand and cannot be effectively achieved apart from each other.

This reorientation toward a focus on being truly known by Him begins with a commitment to vulnerability before Him. He wants to give us a great name and help us earn a reputation throughout the land, but it requires a life that is fully given over to Him. It does not require a perfect life — far from it! In fact, it is clear He has repeatedly chosen for His work those who have abandoned pretense in favor of an embrace of their own weakness. He is looking for those who would seek genuine, transparent relationship with Him — those who would lay down their own reputations in favor of His. In other words, He is looking for those who desire to be known in every way — failures and all.

This idea has become easier for me to grasp since becoming a father. When one of our children says something like “You are the best dad in the world,” it absolutely melts my heart. It is the best affirmation they can give, and the weight of its value is increased by the fact that our relationship is genuine. My kids know all too well that I am not perfect, and they know I am aware of their imperfections as well. This mutual and genuine relationship makes an expression of great love all the more meaningful because it flows from a place of intimate knowledge of my shortcomings. It is truly unconditional.

I suggest it is not all that different for our heavenly Father. He wants to know every part of us and to express His unconditional love for us even while fully aware of our weakness. He is not looking for perfection, but He does desire full surrender. He longs to know us in full. If we are to be used by Him in a way that proclaims His fame, we must set our hearts not on fame but on being known by the Famous One. We must lay down our reputation in exchange for His and trust that He will build for us a reputation capable of carrying His fame. It is better to be known than to be famous.

Where Am I Known?

Where am I known? Another way to ask it is, Where does my fame reside?

As with so many areas of life, this is ultimately a matter of the heart. It is a question of where we are laying up treasure and what truly drives us. It is a choice, because we can only serve one master (Matthew 6:24). It requires an understanding that we cannot effectively amplify His fame unless we are fully hidden in Him. Conversely, we cannot be hidden in Him unless His fame is our highest goal.

There is a sobering two-edged component to this concept. So far, we have focused mostly on the exhilarating possibilities that exist if we dedicate ourselves to God’s fame and to being known by Him. But it is equally true that if we choose to devote ourselves to our own fame and our own reputation, those lesser desires will enslave us (Galatians 4:9). If we become more concerned with whom God is using—and whether or not it is us—than we are with the simple desire that He move, we fall into this trap.

Where are you known?

Where does your fame reside?

Are you fully known by and hidden in Him?

When God moves through another, are you willing to fall in behind them?

Yes, we were made for fame — His fame.

We obtain and amplify that fame when we are fully known by Him. It is better to be known than to be famous.

Excerpted with permission from My Fame, His Fame by Thann Bennett, copyright Nathanael Bennett.

Do you feel and believe you are known by God? How are you inspired to pursue His fame? We’d love to hear your thoughts in the comments!