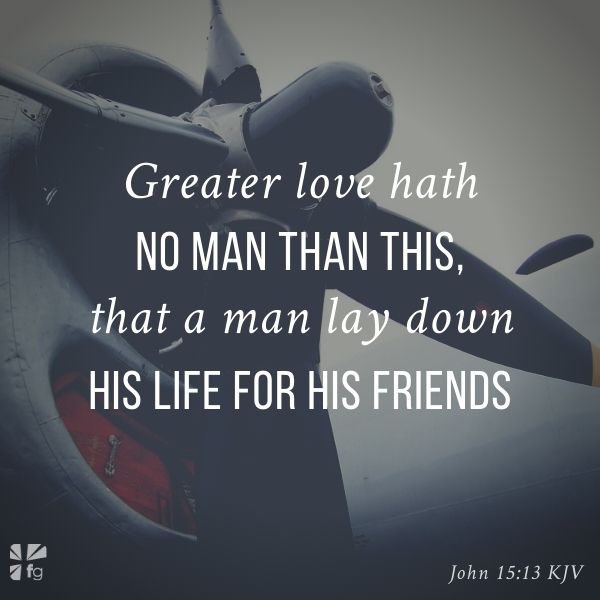 I sought the Lord, and He heard me, and delivered me from all my fears. — Psalm 34:4 KJV

Greater love hath no man than this, that a man lay down his life for his friends. — John 15:13 KJV

We have a lot of problems in this country, but we should never forget how fortunate we really are. I thank God I was born an American. We have been blessed in so many ways. It reminds me of that passage in the Bible: “For unto whomsoever much is given, of him shall be much required.” ~ Red Erwin

The conflagration occurred inside a speeding aircraft at an altitude of 1,500 feet over the ocean near the coast of Japan.

The man was Henry Eugene Erwin. He was a staff sergeant in the US Army Air Force, and his buddies called him Red because of his thick red hair.

He was my grandfather.

What happened inside the airplane took about twenty-two seconds, and it resulted in Red Erwin being awarded the Medal of Honor, the highest military award in the United States. It changed his life, and it deeply affected my own.

Red Erwin was twenty-three years old. He had brown eyes, stood five foot ten, and weighed 165 pounds. He was a former Boy Scout, steel-worker, and Methodist church volunteer. He was a passionate history buff and a devoted baseball fan. His crew commander, Tony Simeral, called him “a country boy, quiet, unassuming, religiously devout,” and the best radioman in the squadron.

Red came from a little town near Birmingham, Alabama. He was described by those who knew him as cheerful, humble, reliable, and highly intelligent. He loved his new wife of three months, and he loved his family, his church, and his country.

Erwin was the radio operator on board a B-29 Superfortress, a strategic heavy bomber, nicknamed the City of Los Angeles and manned by a crew of twelve airmen. This was their eleventh combat mission. Their unit was based on the Pacific island of Guam, and it was part of the Fifty-Second Bombardment Squadron, Twenty-Ninth Bombardment Group of the Twenty-First Bomber Command, led by the legendary Maj. Gen. Curtis E. LeMay.

The City of Los Angeles was the lead plane (the pathfinder) in an airborne task force of eighty-five B-29s preparing for a low-level attack on a military chemical production complex north of Tokyo.

Erwin and the thousands of American airmen and support crew personnel in the B-29 force were in the process of trying to end World War II in the Pacific by burning the cities, factories, and military bases of the Japanese Empire to the ground and forcing its government to surrender unconditionally to the Allies. It was a horrible calculus of fire and death that consumed tens of thousands of Japanese civilians, but it seemed the only way to force a surrender that would potentially save many more multitudes of Japanese and American lives.

At 9:30 a.m., on a signal from the pilot, my grandfather, whom I’ll simply call Red, positioned himself over a small chute near his feet in the deck of the plane and released a series of three smoke bombs to signal the following planes to swarm together in a broad formation to prepare to attack their target.

Then, as a final marker signal, Red placed a cylindrical object the size of a large rolling pin into the chute. It was a 20-pound phosphorus bomb, which resembled a small rocket, and it produced a massive fused explosion of white-yellow fire and smoke in the sky that could be seen from dozens of miles away. It was a maneuver he had performed dozens of times before in training and in combat.

Only this time something went terribly wrong.

Instead of dropping several hundred feet into the sky below, for some reason the bomb jammed, detonated inside the chute, and shot a ball of fire up and onto my grandfather, coating him in phosphorus, which was burning at over 1,400 degrees Fahrenheit, more than six and a half times the temperature of boiling water.

The plane filled with smoke. The pilot could not see the controls. And the gigantic bomber began to plummet toward the ocean. The aircraft would slam into the sea in a matter of seconds.

Red Erwin was blind and on fire. The flames incinerated his head, arms, and upper body. He was a human torch.

His brain and body registered infinite waves of pain, but he also clearly sensed the bomb somewhere nearby, flopping around on the floor and spewing mountains of billowing fire and smoke. It was just a few feet from the bomb bay, which contained 8 tons of incendiary and demolition bombs. If the burning phosphorus fell among the bombs, it would touch off a spectacular explosion that could engulf the other B-29s in the formation.

Red Erwin had a split-second choice to make. He could resign himself to his fate and die along with the eleven other souls on board the plane, or he could try to alter that fate.

The first thing he did was pray. He was a quiet, intensely religious young man, and prayer came naturally to him.

Lord, I need Your help now.

What Red Erwin did next was so courageous and so mind-blowingly difficult that it defies belief. For many years, I wanted to distance myself from thinking about it because I thought I could never measure up to it.

Red’s choice triggered a series of events that shaped his life, my life, the lives of many others, and the history of the highest award for military valor the United States can bestow upon a warrior: the Medal of Honor. Red Erwin decided he would find the burning bomb, pick it up with his bare hands, embrace it with his body, and find a way to get it out of the aircraft and into space — with the help of God.

An instant after he prayed, Red stopped feeling any pain. He could hear voices calling out to him, Go! Go! Go! You can do it! Only he sensed these weren’t human voices, and they weren’t coming from inside the plane. They came from somewhere else.

He leaned down and frantically felt around the floor.

He found the bomb, still burning ferociously and spewing columns of smoke, scooped it into his arms, and hugged it to the side of his chest like a running back cradling a football.

Then Red moved through the plane, blind and completely on fire.

Since 1862 more than forty million men and women have served in the armed forces of the United States. So far, only 3,506 of them have been awarded the Medal of Honor, a distinction reserved for only the most extraordinary displays of courage and valor and awarded by the president on behalf of the US Congress. My grandfather is one of them.

For some years, as a young man, I felt as if I lived in the shadow of my grandfather. And I tried to run away from it.

This book is the story of my grandfather and his Medal of Honor and my journey to discover who he was and how his life shaped mine.

This is a story of war and of one American’s journey through a cataclysm that engulfed millions of human beings in a clash that would define the destiny of the twentieth century and shape the world we live in today.

This is a story of love. Of one man’s love for his country and his brothers in arms and how it gave him the power to perform an act of supreme courage. It is the story of the love of one woman and how it gave that man the power to struggle through impossible odds and unbearable pain on a journey from the flames of hell toward a life of love and peace.

And it is a story of how a horribly wounded young man decided to honor his country and his fellow wounded veterans by devoting the rest of his life to serving them.

This is a story of one man’s journey from ultimate despair to a place beyond service, beyond honor, and beyond valor to a life illuminated by the light of God’s love.

Excerpted with permission from Beyond Valor: A World War II Story of Extraordinary Heroism, Sacrificial Love, and a Race against Time by Jon Erwin and William Doyle, copyright Kingdom Studios, LLC.

How does Red Erwin’s reliance on God in impossible circumstances inspire you? In what ways can you show your gratitude for those who have fought for your freedoms? We’d love to hear your thoughts in the comments!