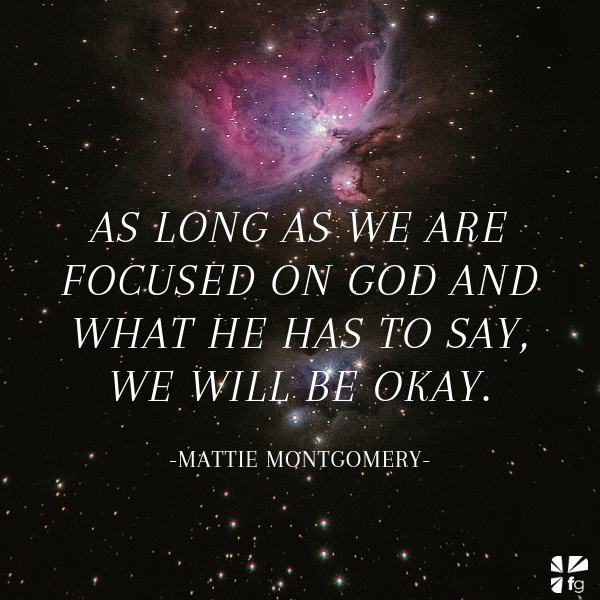 That all the peoples of the earth may know the hand of the Lord, that it is mighty, that you may fear the Lord your God forever. —Joshua 4:24

The more I’ve studied the fear of the Lord, the more I’ve realized that it’s as much a part of the message of the Bible as God’s great love for humankind; you can’t really have one without the other.

As I read Scripture with new eyes, I begin to see this fearful aspect of God and His nature in so many familiar passages. It was like discovering a new side to someone. This can be uncomfortable, I know. Just how much so was brought home to me during a show For Today played in Atlanta.

We were at the Masquerade, an old brick building with wood floors that didn’t seem to have been cleaned in a century or so, all feeling a bit like a castle. Candice and I decided that my two older boys were at an age to watch a show for the first time, from the wings of this famous venue.

There was a full house, several hundred kids getting into the music, and I was doing my thing, sweat and hair flying. Loud music. Strobe lights. Smoke. Energy. Aggression. To the uninitiated, pandemonium with a beat.

At one point I stole a glance to the side. Kai and Caleb were each clinging to one of their mom’s legs, heads half-buried while peeking out at me with eyes wide like saucers, a mix of recognition and shock. It was as if they were saying, “This is Dad, but this isn’t the dad we know.” I went over to them during a song to give them a high five, to signal, “Hey, it’s okay, it’s me,” but they weren’t having any of it.

Only after the show did they come cautiously for hugs, as if to check it was still me, and I held them close as we went out front to talk and pray with people. This was their own Brock moment, when they discovered the fierceness of a father who was both their promise and their protection.

In a similar kind of way, I have found dimensions of God’s fierceness and fearful nature in the stories of some well-known Bible characters.

We don’t have to wait long for fear to crop up in the Bible. It first appears in Genesis 3, after Adam and Eve did the one thing they were told not to do, eat from the Tree of Knowledge of Good and Evil.

God came for what seems to have been His regular walk with them in the garden and could not find them. When He called out,

Adam answered, “I heard Your voice in the garden, and I was afraid because I was naked; and I hid myself”. — Genesis 3:10

It’s interesting that Adam and Eve weren’t afraid of the devil; they were afraid of being exposed before God. Even though they had only seen and known His goodness up to that point, that experience of pure, perfect intimacy with Him provoked fear at what breaking such communion would mean.

Yet we see so much of God’s loving heart and kind intentions in this whole encounter. He didn’t call out angrily, “How dare you!” or “You have betrayed me!” or “Get out of my sight!” Instead, He asked Adam, “Where are you?” (Genesis 3:9).

What an odd question. But as John Bevere points out in The Fear of the Lord, “Anytime God asks a question, He is not looking for information.”1 It’s not as if God didn’t know exactly where Adam and Eve were, after all. He asked the question because He was giving Adam room to respond, to move toward God in his sin. I suspect, too, that His tone was tender rather than stern, an invitation to come out of hiding rather than scaring him away. That God would show such tenderness to Adam even in his rebellion is a beautiful picture of His love for us all in our fallenness and brokenness. Yet God’s question still evoked fear in Adam. He knew the enormity of what he had done.

What strikes me, too, is how God’s main concern is revealed in His question in verse 11: “Who told you that you were naked?” He was not primarily focused on the fact that Adam had eaten from the banned tree — that question came second. First, above all, He was concerned that Adam and Eve had listened to the wrong voice.

In fact, that’s the source, the essence of all sin, isn’t it — listening to the wrong voice?

As long as we are focused on God and what He has to say, we will be okay.

This is why it is so important that we pursue an intimate relationship with God, so that we can discern His voice from all the others clamoring for our attention. We can be confident that this is not only possible, but something God wants for us. Jesus said,

This story from the garden also should emphasize to us all just how seriously God views sin. Adam and Eve sinned only once, but that led to their separation from God and their banishment from His presence. Those were pretty serious consequences — for us all!

If only we viewed our own sin in the same way. Instead, we minimize and rationalize.

There is a pretty simple litmus test for knowing if someone fears God, and it’s found in the Genesis 22 account of the life of Abraham, the father of our faith.

This episode is significant in a number of ways, including the fact that it is the first time the words worship and love are used in Scripture. But Abraham wasn’t there on the mountain to sing songs or dance — he was there to sacrifice the thing he loved most in the world.

It was his son, Isaac, of course. This was the child Abraham and Sarah had waited for through many long years, born in their old age when it seemed impossible. If God was going to fulfill His long-ago promise to Abraham to make of him “a great nation” (Genesis 12:2), it would have to be through this son. Yet God told Abraham,

Take now your son, your only son Isaac, whom you love, and go to the land of Moriah, and offer him there as a burnt offering on one of the mountains of which I shall tell you. — Genesis 22:2

As a father myself, I can’t imagine what went through Abraham’s heart and mind, but he obeyed. He journeyed to the mountains of Moriah, built an altar, laid wood on it, then bound Isaac and laid him on top. Only at the last minute, as Abraham raised his knife, did God intervene. A voice came from heaven:

Do not lay your hand on the lad, or do anything to him; for now I know that you fear God, since you have not withheld your son, your only son, from Me. — Genesis 22:12

Obedience. This was the measure of how Abraham feared God — that he did what God had directed even when it seemed to be counterproductive to the fulfillment of God’s promise to him.

It’s fairly easy to do what God says when you can understand what He’s doing and even see the fruit of your actions. It is a whole lot harder when you don’t understand, when what He is saying seems to move you away from the dream He’s given you. Do we fear God enough to do what He says even when it’s costly, inconvenient, or uncomfortable? We must realize that the real dream is intimacy with God, not productivity for God.

The fact is, He still wants us to be willing to “kill our babies” today. But, you say, God called you into ministry, and your church is flourishing. God gifted you in music and is opening so many doors for you. There’s no way that He would want you to walk away from that and do something else.

Are you so certain? As it was for both Abraham and Adam, it comes down to hearing, honoring, and obeying God’s voice and doing what He says, come what may. In Abraham’s obedience, his unwavering trust, we also see how the fear of the Lord led to blessing. God had previously spoken to Abraham about birthing a people through him, but it was only after this encounter that He got specific. The angel of the Lord told Abraham:

By Myself I have sworn, says the Lord, because you have done this thing, and have not withheld your son, your only son — blessing I will bless you, and multiplying I will multiply your descendants as the stars of the heaven and as the sand which is on the seashore; and your descendants shall possess the gate of their enemies. In your seed all the nations of the earth shall be blessed, because you have obeyed My voice. — Genesis 22:16-18

When people talk about “mountaintop” experiences in worship, they usually mean sweet moments when they are lost in a sense of God’s love and peace. Abraham’s mountaintop experience of worship was a far different thing. His fear of the Lord was evidenced by radical obedience.