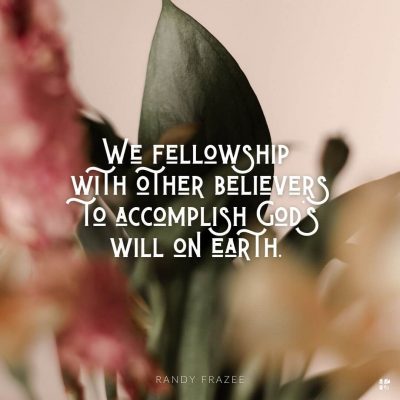 All the believers were together and had everything in common. They sold property and possessions to give to anyone who had need. Every day they continued to meet together in the temple courts. They broke bread in their homes and ate together with glad and sincere hearts, praising God and enjoying the favor of all the people. And the Lord added to their number daily those who were being saved. — Acts 2:44-47

Scripture makes it clear through commands, promises, and examples that the Christian life was never intended to be lived alone. Those who have received Christ are now wired through their new spiritual DNA to live in community. We must have a band of believers to walk alongside us, all pointed in the same direction — toward the Father. Only collectively are we the body of Christ. We need each other to help us become like Jesus and consistently model his life.

KEY QUESTION: How do I develop healthy relationships with others?

In Genesis 1 and other Scripture passages, we see the Trinity is, in itself, a community. Three persons — Father, Son, and Holy Spirit — who are so intense and complete in their unity that they make up one essence. We are made in his image to experience this same community. Separate in entity, one in unity. The apostle Paul reminds us of our common bond:

There is one body and one Spirit, just as you were called to one hope when you were called; one Lord, one faith, one baptism; one God and Father of all, who is over all and through all and in all. — Ephesians 4:4-6

If you have any encouragement from being united with Christ, if any comfort from his love, if any common sharing in the Spirit, if any tenderness and compassion, then make my joy complete by being like-minded, having the same love, being one in spirit and of one mind. — Philippians 2:1-2

As you have read the accounts of Jesus’ calling His disciples at the beginning of His ministry, have you ever thought about His recruitment style? What was His end goal? Since He is God, He could easily have walked down the beach and assembled an army of 12,000 men to overthrow the government. He could have called together 1,200 and given them amazing powers. But He did nothing of the sort. In fact, He didn’t even call 120. Essentially, Jesus formed the very first “small group,” as they’re called in the church today. He launched His ministry with 12 men. He put together a tiny community of very diverse and, frankly, mostly unimpressive followers. Why? Because Jesus wasn’t planning a coup or forming a cult; rather, He was building a community.

He didn’t call those He chose based on résumé, IQ, or brawn. The fact that His original small group formed the church that still lives today shows He chose wisely as He prepared a body of believers to carry out His work — which swept through the known world after His ascension into Heaven.

KEY IDEA: I fellowship with Christians to accomplish God’s purposes in my life, in the life of others, and in the world.

The book of Acts contains a passage that beautifully displays the simple power of community to which we are called, while also highlighting the critical commitment we must make as individuals:

In Joppa there was a disciple named Tabitha (in Greek her name is Dorcas); she was always doing good and helping the poor. About that time she became sick and died, and her body was washed and placed in an upstairs room. Lydda was near Joppa; so when the disciples heard that Peter was in Lydda, they sent two men to him and urged him, “Please come at once!”

Peter went with them, and when he arrived he was taken upstairs to the room. All the widows stood around him, crying and showing him the robes and other clothing that Dorcas had made while she was still with them.

Peter sent them all out of the room; then he got down on his knees and prayed. Turning toward the dead woman, he said, “Tabitha, get up.” She opened her eyes, and seeing Peter she sat up. He took her by the hand and helped her to her feet. Then he called for the believers, especially the widows, and presented her to them alive. This became known all over Joppa, and many people believed in the Lord. — Acts 9:36-42

Tabitha was a widow who had become a vital part of the body of believers, as she was “always doing good and helping the poor” — so much so that the people missed her deeply and sent messengers to summon Peter, hoping he could do something. Miraculously, through the power of God, Peter knelt and prayed, and Tabitha came back to life!

It is important to see that the degree to which Tabitha had given her life to biblical community was, in the end, the very motivation of Peter to extend her life. She had made herself so integral to these fellow believers that they wouldn’t take death as the final answer. This account of a widow who lived sacrificially provides inspiration for us to graft ourselves deeply into a body of believers to make this kind of difference.

To properly define biblical community, look no further than the last few syllables in the phrase — “unity.” This is both the point and practice of the concept.

Christ’s vision is that you will become an integral part of His grand body of believers, ushering in His kingdom around the globe by being grafted into the lives of a local body, making a difference right where you are. The ministry you do for a neighbor truly does impact the world as all believers join in obeying Christ. This is a sort of “one for all, and all for one” battle cry.

The practice of biblical community reinforces both our belief in our identity in Christ individually and our belief in the church to, together, be His hands and feet to the world.

KEY APPLICATION: What difference does this make in the way I live?

“You become who you hang out with.”

“Show me your friends, and I’ll show you your future.”

These are just two of a number of catchphrases that describe the impact of those with whom we spend the most time. The book of Proverbs contains many verses that attach the impact of our relationships to the development of our identity.

We fellowship with other believers to keep our relationship with God strong.

Biblical community will, first, keep our vertical connection — our relationship with God — strong. Nothing will hold us accountable and encourage us to follow Jesus quite like other Christ followers. The effect of us joining in the mission to “spur one another on toward love and good deeds” is powerful.  (Hebrews 10:24)

We fellowship with other believers to keep our relationships with others strong.

Biblical community is the optimum way to keep our horizontal relationships on the right and righteous path. Fellow Christians can help us strengthen our ties to those in the church and outside the church. We can together encourage and build each other up inside the body, while praying for and challenging each other to reach out to those who don’t know Christ.

We fellowship with other believers to accomplish God’s will on earth.

If you were going to rescue a person who had fallen off a steep cliff, you would want to be tied to as many people up on the mountain as possible, supporting you and holding you as you attempt rescue. As we minister and reach out to those outside the community of faith, it is necessary to stay tethered together for optimum success, lest we also fall.

There are days we desperately need a good hug to keep going, and other days we need a swift kick in the pants to get back to where we should be. Friends who love God, and love us for who we are, know exactly when and how to do the right thing for us. In the book of Proverbs, Solomon writes, “Faithful are the wounds of a friend” (Proverbs 27:6 NKJV).

Biblical community is the glue holding us together, through which we have opportunity to grow in favor with God and to keep our relationships right with others. Are you struggling in your relationship with God? Do you find yourself simply wanting to love Him more than you do? Are you finding yourself in continual dysfunction with those around you? Or do you desire to strengthen your relationships to a greater degree? Connecting to, submitting with, and walking alongside brothers and sisters in Christ can get you on the right track, while also keeping you on the path to God’s truth and His will.

Excerpted with permission from Think, Act, Be Like Jesus by Randy Frazee, copyright Randy Frazee.

We were made for community! We were not made to struggle through life alone. Are you involved in a fellowship of believers who know you, love you, and speak into your life? Come share with us on our blog! We want to hear from you! ~ Devotionals Daily