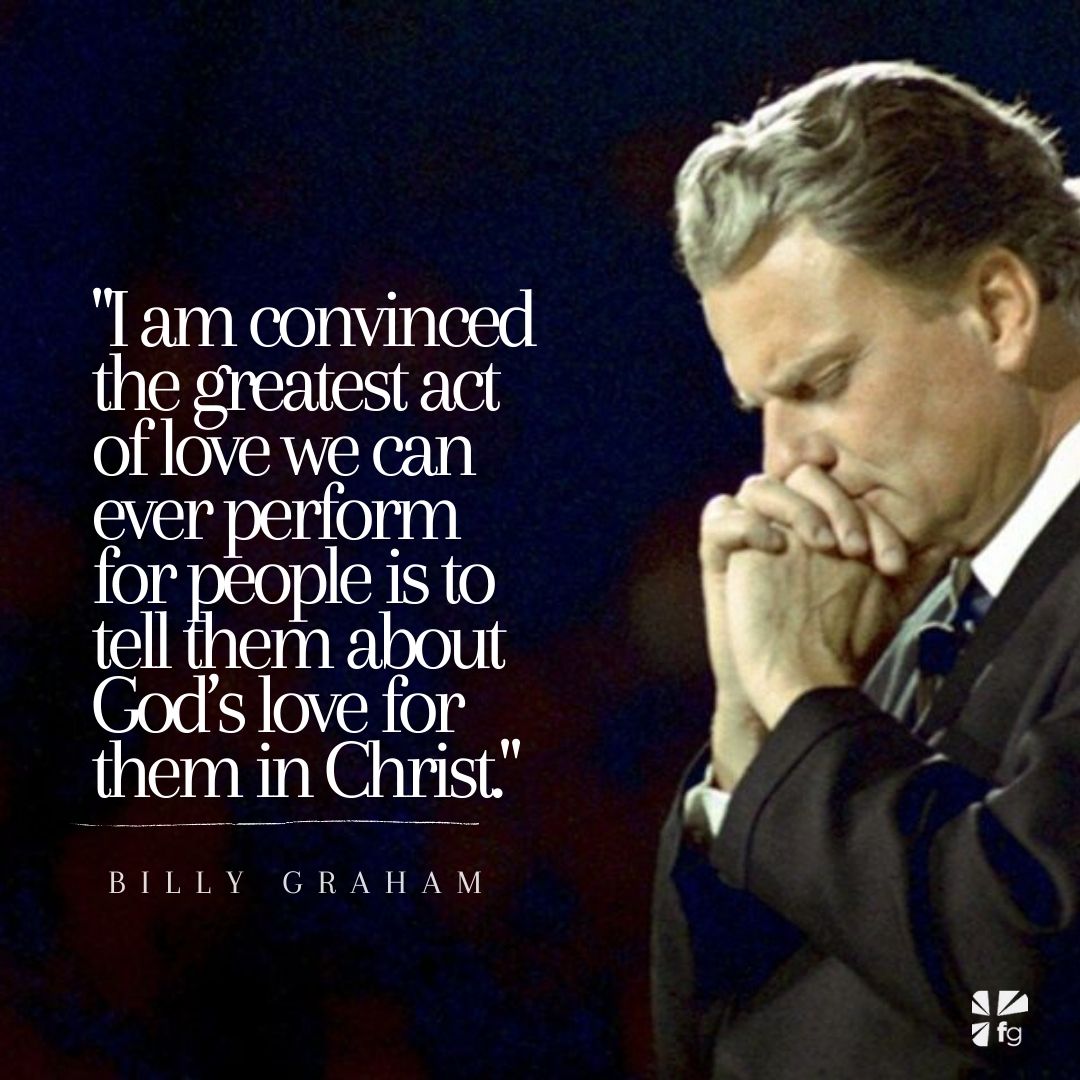 I am convinced the greatest act of love we can ever perform for people is to tell them about God’s love for them in Christ. ~ Billy Graham

It was September 14, 2001 — three days after the September 11 attacks robbed nearly three thousand people of their lives. A service of prayer and remembrance was taking place at the National Cathedral in Washington, DC. After prayers and hymns, including “O God, Our Help in Ages Past,” a hush fell as an elderly man with a mane of white hair stood up. A church official helped him up the steps to the pulpit. From there, the man gazed through his spectacles at an audience that included every living former president, along with the current one, George W. Bush. It was to Bush that the eighty-two-year-old known as “America’s pastor” — Billy Graham — addressed his first words, thanking him for calling a national day of prayer and remembrance, which the country badly needed.

His next words were for his fellow Americans — the thousands seated in the pews and the millions watching at home on their television sets — who desperately needed comfort and hope after the evil and horrible attacks earlier that week.

“We come together today,” Graham said, “to affirm our conviction that God cares for us, whatever our ethnic, religious, or political background may be.”

His message may have surprised some — especially those who had suffered the loss of loved ones on 9/11 or those whose feelings about Muslims had hardened into hate. He reminded his audience, quoting Psalm 46:1-2, that

God is our refuge and strength, an ever-present help in trouble. Therefore we will not fear, though the earth give way and the mountains fall into the heart of the sea.

He understood that many were angry with God for allowing the loss of so many lives at the hands of evil men. God understands this anger, he said, and we should remember that He “can be trusted, even when life seems at its darkest.”

The attacks were a reminder of “the mystery and reality of evil” and of our need for one another. And as difficult as it may be for us to understand, Graham noted, the attacks “can give a message of hope… for the future” because of God’s promises.

Graham spoke of his own hope for his earthly life and for the life to come and reminded his audience that many of those killed in the attacks were now with God, enjoying the glories of Heaven so much that they would not desire to return to earth. This, he announced, is the hope for everyone who puts his faith in God.

Then Graham briefly gave the witness that made it into every sermon he’d ever given since he’d first begun preaching in 1937 as a teenage boy. And then he prayed that all who heard his voice would feel God’s loving arms around them, understanding that, if they put their trust in God, He would never forsake them.

As Graham made his way back to his seat, there was silence at first. Then the congregation rose to its feet and gave a standing ovation.

When we read the words of Jesus, who commanded His followers to go into the world to preach the good news to every creature, we don’t get the idea that we are to do this by ourselves. But William Franklin Graham Jr. probably came closer to achieving this magnificent goal than anyone who has lived since Jesus spoke these words. Over a career spanning seventy-six years (1937–2013), the evangelist preached the Gospel in person to almost 215 million people in 185 countries. He reached hundreds of millions more through radio, television, newspaper columns, magazines, books, films, and webcasts.

Many younger people don’t remember Billy Graham, or if they do, they remember him as an old man with a shaky voice. They probably don’t picture him as a skinny teenage boy milking cows on his parents’ farm or a tall, good-looking, and popular high school student going out on dates in his father’s Model T Ford. They don’t envision a young man trying to figure out what to do with his life — and then coming to the conclusion that he wanted to devote himself, heart and soul, to… baseball. But that’s a fact.

Billy Graham died at home at the age of ninety-nine on February 21, 2018. He lay in honor at the US Capitol Rotunda and was buried in a simple wooden casket made for him by prisoners at Angola Prison, next to his wife in Montreat, North Carolina, on the grounds of the Billy Graham Library. His son Franklin gave the funeral message, which included an invitation to those in attendance to repent of their sins and be saved. And he repeated a comment his father often made about his death, one that sums up the meaning of his entire life’s work: “I’ll be more alive than I am now. I’ll have just changed addresses, that’s all.”

Billy Graham may have been the most prolific evangelist in all of history. And yet, he was just a normal man who submitted himself wholly unto God’s Hand of direction. The same can be true for each of us! And, we can evangelize in our own circles in ways that are fruitful and honor God. What would that look like for you? Come share with us on our blog. We want to hear from you! ~ Devotionals Daily