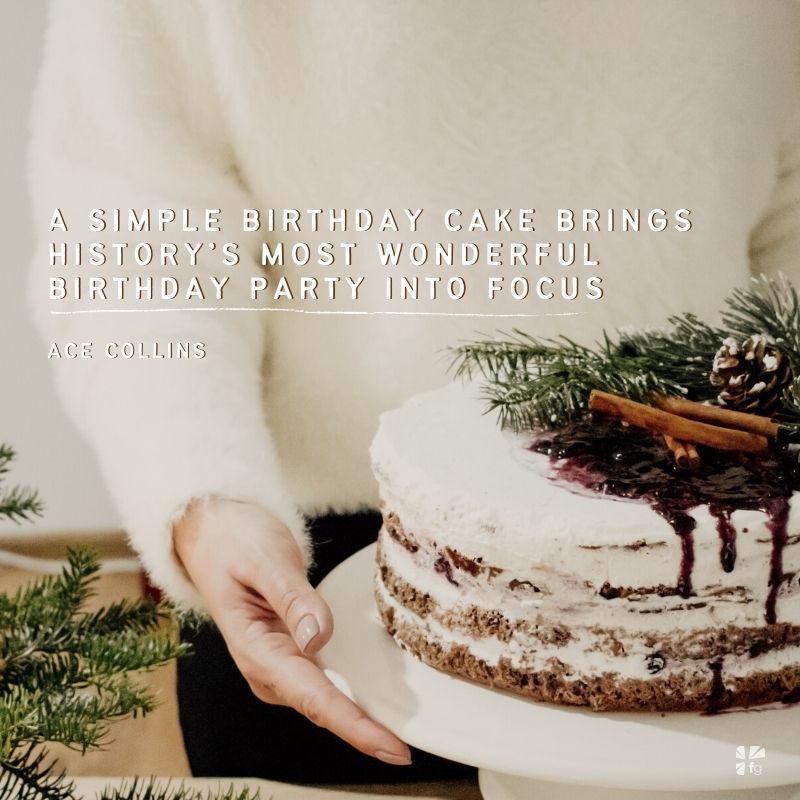 The tradition of baking birthday cakes has existed as long as recipes for cakes have been distributed and calendars have recorded the days, weeks, and years. It is a well-established fact that throughout most of the world, marking the passing of another year of life remains one of the most important traditions for people of every race and culture. Therefore, it seems only natural that a Christmas tradition of baking a cake to recognize the birth of Jesus would have developed as well.

Though there are no written records to indicate where or when baking a birthday cake for Jesus originated, it is likely that this tradition dates back only a few hundred years. Though a few sources claim these sweet treats were first served in England, it is more than likely that this holiday tradition started in Germany, where Christ’s birth was celebrated in a more overtly religious fashion from the Middle Ages on.

To bring special meaning to the holidays, the Germans embraced symbolism, such as the Christmas tree and the use of nativity scenes, in their annual holiday traditions. Catholics and Protestants alike attended Christmas Eve services in their churches. Children especially looked forward to Christmas because they would get to sing songs, receive presents, and eat special treats served only during the holidays. As food was an important part of family gatherings in Germany, as was passing along beliefs from one generation to the next, traditions and historical lore meant a great deal to the people of this area. So it was a natural evolution to include a birthday cake for Jesus as part of a family Christmas celebration.

For believers who lived during this period, the baking of the cake accomplished several important functions. First of all it gave children something to look forward to with great anticipation. Cake, like most sweets, was a rare treat; therefore, getting to enjoy cake meant something special was taking place. This atmosphere and the attitudes it created naturally opened the door to the retelling of the story of the Incarnation. It also gave parents a chance to explain why Jesus’ birth and life were still important. The little ancient information that can be found concerning the Christmas birthday cakes of the past indicates that they were often baked with special treats inside. Marbles, small metal animals, or coins were dropped into the batter. Then, after the children had heard the story of Jesus’ birth, said a prayer, and the pieces were cut, the real fun began. Kids anxiously and carefully cut into their slice of cake to find what treasures were hidden inside.

The cakes were usually white, representing the purity of Jesus. If any icing was applied, it was often red, signifying the blood that the baby grown into a man would eventually shed for sinners. The fact that the cake rose as it was baked represented the resurrection of Christ. The single candle that usually topped the cake was symbolic of the light Christ brought to the world and the fact that that light would never be extinguished. In some cases, the light also represented the star that the wise men followed to Jesus’ hay crib. Finally, the cake’s sweet taste was used to explain the wonderful life that awaited anyone who became a Christian.

In the 1800s, after England and America began to celebrate what is now considered a traditional family Christmas, the baking of the birthday cake for baby Jesus became more common in these two countries. While this tradition was never as widely practiced as gifts, trees, and Santa Claus, it did not die out. In many homes the baking of the cake was the highlight of the season.

In the past twenty years or so, thanks in part to churches and Christian schools reviving the old custom, baking a birthday cake for Jesus has become a rapidly growing tradition. Recipes can be found in new holiday cookbooks and on the internet. There are also instructions that spell out what each of the cake’s ingredients symbolize and how best to bring this custom into a family’s holiday celebration. Though there is some variance in the lessons taught from church to church and home to home, in most cases the symbolism that exists today is very close to that first taught by Germans more than five hundred years ago.

Why is the baking of a birthday cake for Jesus just now beginning to come out of the shadows and into the mainstream of Christmas traditions? Probably for the same reasons that led to the initiation of the practice. Having children come together with their parents or grandparents to bake a cake for Jesus’ birthday offers a way to distinguish the reason for the season from the commercial aspects that are found in almost every facet of a modern Christmas. It gives adults the chance to fully explain the real reason that the holiday exists. The fact that meaningful family conversations have traditionally taken place in the kitchen while a meal is being prepared sets the table for this experience being one that is comfortable, fun, and informative. Thus, the most elemental meanings of Christ’s birth and life can be explained while mixing the ingredients, stirring the batter, and decorating the cooked cake. Yet perhaps most important is the final element of the tradition that might make the most lasting impression.

Singing the “Happy Birthday” song to Jesus brings the Baby in the manger to life and clearly places Christ at the center of the annual holiday season.

Just as Jesus and His family were together on the day of His birth, a family coming together to bake a cake reminds them that each Christmas is an important time. At Christmas children, grandparents, mothers, fathers, aunts, uncles, and cousins unite and rejoice in the blessings that they have been given over the year. They share gifts and stories and get to know each other in new ways while remembering the holidays of the past. When partaking of a piece of Jesus’ birthday cake, the real meaning of Christmas renews and reawakens the importance of sharing the love that was brought to earth through the birth of the Savior. This tradition also reinforces how that love creates a special bond within the family itself. Hence, a simple birthday cake brings history’s most wonderful birthday party into focus and shines special light at the family table during each holiday season.

Excerpted with permission from Stories Behind the Great Traditions of Christmas by Ace Collins, copyright Andrew Collins.

Does your family celebrate Jesus’ birth with a cake? Do you sing Him the “Happy Birthday” song? If not, it’s a great tradition to start this Christmas! Come share with us on our blog. We want to hear from you! ~ Devotionals Daily