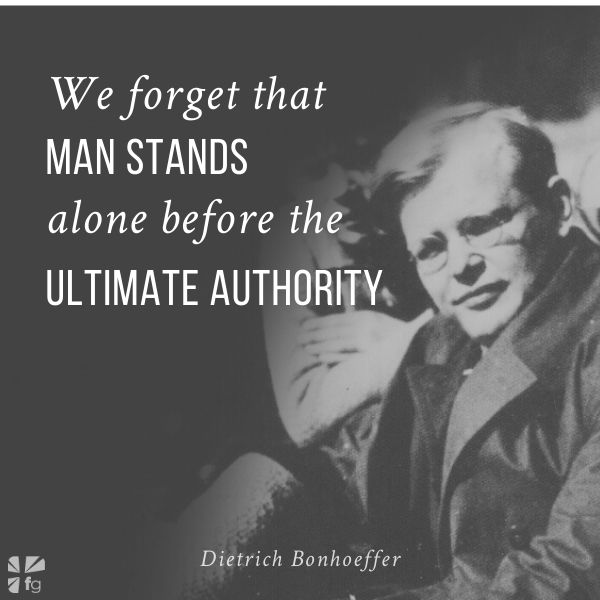 Editor’s Note: As Adolf Hitler and the Nazis seduced a nation, bullied a continent, and attempted to exterminate the Jews of Europe, a young pastor and theologian named Dietrich Bonhoeffer become one of the first to speak out against Hitler. As a double agent, he joined the plot to assassinate the Führer, and he was hanged in Flossenberg concentration camp at age thirty-nine. Since his death, Bonhoeffer has grown to be one of the most fascinating, complex figures of the twentieth century. In Bonhoeffer: Pastor, Martyr, Prophet, Spy, author Eric Metaxas brings the reader face-to-face with a man determined to do the will of God radically, courageously, and joyfully — even to the point of death. Enjoy today’s excerpt from the abridged biography.

It’s been our misfortune to have the wrong religion. Why didn’t we have the religion of the Japanese, who regard sacrifice for the Fatherland as the highest good? The Mohammedan religion too would have been much more compatible to us than Christianity. Why did it have to be Christianity with its meekness and flabbiness?
— Adolf Hitler

On January 30, 1933, at noon, Adolf Hitler became the democratically elected chancellor of Germany. The Third Reich had begun.

Two days later, on Wednesday, February 1, a twenty-six-year-old theologian gave a radio address at the Potsdamerstrasse radio station. Bonhoeffer’s speech was titled “The Younger Generation’s Altered Concept of Leadership.” It dealt with the fundamental problems of leadership by a Führer, explaining how such a leader inevitably becomes an idol and a “mis-leader.” Before he could finish, the speech was cut off.

This story is usually told as though Bonhoeffer had bravely put himself forward to speak out against Hitler, whose henchmen ordered the microphones turned off and the broadcast ended. But the speech had been scheduled for some time and was not a response to Hitler’s election. Still, the timing of Bonhoeffer’s speech, two days after Hitler’s election, was uncanny.

The Nazis may have censored the broadcast, but it’s also possible that Bonhoeffer and the station manager had misunderstood each other, and he simply ran out of time. It’s unclear whether the Nazis could yet control the airwaves as they certainly would in a few years.

In any case, Bonhoeffer was upset that the speech ended prematurely, mainly because he didn’t want his listeners to come away with the notion that he approved of Hitler. Anyone who heard the end of the speech would understand that the Führer Principle was disastrously misguided, but since no one heard the ending, Bonhoeffer had the speech duplicated and sent it to many of his influential friends and relatives, along with a note explaining that the speech’s conclusion had been cut off. The speech was also published in the Kreuzzeitung, a politically conservative newspaper, and Bonhoeffer was invited to give an extended version of the speech in early March at the College of Political Science in Berlin. Such things were still possible in early 1933.

Bonhoeffer began by explaining why Germany was looking for a Führer. The First War and the subsequent depression and turmoil had brought about a crisis in which the younger generation, especially, had lost all confidence in the traditional authority of the kaiser and the church. The German notion of the Führer arose out of this generation and its search for meaning and guidance out of its troubles. The difference between real leadership and the false leadership of the Führer was this: real leadership derived its authority from God, the source of all goodness; the authority of the Führer was submitted to nothing.

Bonhoeffer stated, “Whereas earlier leadership was expressed in the form of the teacher, the statesman, the father . . . now the Führer has become an independent figure. The Führer is completely divorced from any office; he is essentially and only ‘the Führer’ …

The fearful danger of the present time is that above the cry for authority, be it of a Leader or of an office, we forget that man stands alone before the ultimate authority and that anyone who lays violent hands on man here is infringing eternal laws and taking upon himself superhuman authority which will eventually crush him. The eternal law that the individual stands alone before God takes fearful vengeance where it is attacked and distorted. Thus the Leader points to the office, but Leader and office together point to the final authority itself, before which Reich or state are penultimate authorities. Leaders or offices which set themselves up as gods mock God and the individual who stands alone before him, and must perish.1

Forty-eight hours had passed since Hitler’s election, but with Bonhoeffer’s speech the battle lines were drawn.

Hitler gave a speech that day too. He was just forty-three and had already toiled in the political wilderness half his life. Ten years had passed since the Bierhall Putsch that landed him in prison. Now he was the chancellor of Germany. The opening words of his speech that day were: “We are determined, as leaders of the nation, to fulfill as a national government the task which has been given to us, swearing fidelity only to God, our conscience, and our Volk.” Hitler then declared that his government would make Christianity “the basis of our collective morality.” This statement, which was a lie, instantly annulled itself. He ended with another appeal to the God he did not believe in, but whose Jewish and Christian followers he would thenceforward persecute and kill: “May God Almighty take our work into his grace, give true form to our will, bless our insight, and endow us with the trust of our Volk!”

From the start, we regarded the victory of National Socialism in 1933 and Hitler’s appointment as Reichkanzler as a misfortune — the entire family agreed on this. In my own case, I disliked and mistrusted Hitler because of his demagogic propagandistic speeches… his habit of driving about the country carrying a riding crop, his choice of colleagues — with whose qualities, incidentally, we in Berlin were better acquainted than people elsewhere — and finally because of what I heard from professional colleagues about his psychopathic symptoms.2

Four weeks later, Bonhoeffer preached at the Trinity Church in Berlin. It was the first time he had preached since Hitler had come to power. Bonhoeffer saw the new situation for what it was and was not afraid to preach what he saw:

It is He who changes the times and the epochs; He removes kings and establishes kings; He gives wisdom to wise men and knowledge to men of understanding.
— Daniel 2:21

How does Bonhoeffer’s example inspire you? How are his views on leadership helpful today? We’d love to hear your thoughts in the comments!