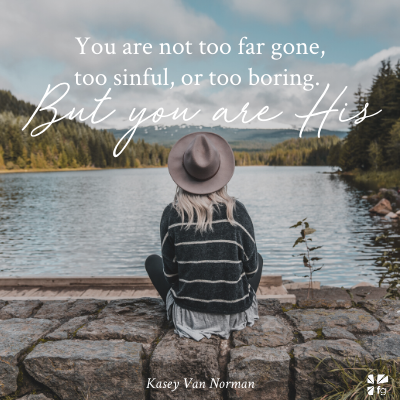 You know what I love most about the Bible? It’s full of sinners, regular people like you and me.

Early on in my Christian life, I thought the people in the Bible were placed there to be our role models, examples of how we are to live if we really want to honor God. I would happily bebop along for a few chapters of Noah’s radical obedience, Moses’ humble longsuffering, and David’s bold faithfulness, until boom-crash-slap.

Why had my Sunday school teachers left out the whole “naked-drunk, impatient-insecure, cheating-murderer” parts of their stories?

I’d feel confused, caught off guard, and a bit betrayed watching them fall from atop the mountain of spiritual zeal. I wondered, “If these guys can’t get it right, then how the heck will I? Should I just skip over these parts? Pretend I didn’t just read about Moses’ missing out on the one moment he’d sacrificed his entire life for? And don’t even get me started on King David. I swear, you give a guy a little time on his hands in view of a naked girl just minding her own business and it’s never going to turn out well.”

How am I supposed to model myself after all of these boneheads?

The good news is, I’m not supposed to. Neither are you — oh, please don’t. Learn from them? Yes. Admire them? For sure. Keep telling their stories to our children and their children? Absolutely! Why? Because they are us and we are them, the story of humanity connecting to one another and the God who saves us all from ourselves. The story of their lives is written for no other purpose than to point out the glorious goodness of the Author.

Whether it’s Old Testament “hall of faith-ers” or New Testament Christians, no one is steadfast toward God. We have faithful days and unfaithful days. Even our most obedient, spiritual moments fail compared with the perfection God requires for entry to His presence. So

God wrote an entire book about people who need saving just as much as we do.

We watch their stories like good movies, drifting in and out of sinful seasons, up and down the rollercoaster of betrayal, suffering, victimization, and victory.

None of them ever arrives. Not one of their stories plays out the way they’d planned. Just when one of them starts to think they’ve got God all figured out, boom-crash-slap! Another twist and turn crashes into their stories. And not because these God-fearing men and women have no legitimate feelings or desires to serve God but because they are not yet willing to deny their feelings or desires in service to him.

America makes it easy to forget that Christianity places little priority on one’s comfort. And it certainly does not promote spending hours considering how better to incorporate “self-care” into one’s daily routine. The call of Christ is not easy. And if you can’t remember the last time you’ve really sacrificed, truly given up a want or need for the sake of someone else, then you might want to prepare yourself for your own boom-clap-slap.

God loves you like He loves Noah, Moses, David, and the whole motley crew. He loves us enough to slap that selfishness right on out of us.

Simon, Simon, behold, Satan demanded to have you, that he might sift you like wheat, but I have prayed for you that your faith may not fail. And when you have turned again, strengthen your brothers. — Luke 22:31–32 ESV

Our day of sifting may come just as it did for Peter: while we’re standing eyeball to eyeball with Jesus.

Peter, one of the most beloved disciples and the founder of the Christian church, most likely felt unbreakable and unstoppable after the high he’d been on experiencing Jesus’ miracles and teachings firsthand. Knowing that Peter gave up his home, family, job, and reputation to follow Jesus leaves little doubt that Peter believed in Jesus. And yet one questions whether Peter had ever truly denied himself long enough to actually believe Jesus.

This much is true,

God never sifts any of us unless we’ve given Him reason enough to.

Peter would not deny himself, but he would deny his friendship with Jesus before realizing how much it meant to him.

The same is true of us.

If we do not believe that God is worth our delight, we will waste our lives chasing every desire other than the one that’s able to fulfill us. Peter was just your average fisherman when Jesus called to him and his brother, Andrew, from the bank of the sea. Based on what we know of his occupation and hometown, Peter may have cussed, drank too much, treated himself once or twice to a visit to the “red light district.” At the very least, he could have held his own with the crude, uneducated men who had little choice but to inherit their father’s trade. He kept odd hours, fishing at night instead of the day. And if fish was all he had for wages, he was most assuredly from the poor side of the tracks.

He wasn’t the man you and I would have chosen to set as the bedrock of the church (Matthew 16:18), but he was God’s perfect man for the job.

Think of what it would take to be a professional fisherman. Peter must have been patient yet determined, a man strong enough to haul in heavy, waterlogged nets yet gentle enough to hold and clean those wriggly fishes. He was most likely a self-starter, focused, with the negotiation skills to sell his fish to market, able to forecast the weather, and just desperate enough for something in his life to change that he would leave all of it behind once the opportunity presented itself.

Jesus didn’t need just any man to help Him change the world, he needed a Peter. Everything about Peter’s past would have been relevant to God’s calling on his life. No part of him would have been wasted, not his personality, passion, or choices.

Because God had every intention of using Peter’s whole life, every divided and fragmented piece of him would have to be sifted through until Peter was made whole, until all of his feelings, thoughts, and behaviors became one with God’s will.

Even in the warning to Peter that Satan had received God’s permission to mess with him, Jesus still assures Peter that he will come out on the other side.

“And when you have turned again.” Not if you turn but when you turn.

Before the foundation of the earth, God chose Peter to fulfill this specific purpose. God knew it, but Peter didn’t. So God proved it to him.

Anything that Peter might use to hold back from claiming his rightful place in God’s promise simply must resurface. Not for God’s sake but for Peter’s.

As God did for Peter, so He does for you and me when there is even an inkling that we’re tempted not to trust Him. In love, that we may see and know our whole stories, the real story, God hands us over to Satan for the destruction of our flesh (1 Corinthians 5).

And as with Peter, my sifting was not pretty. As you know, it led me into the darkest night of my soul, a day no one dreams of as a little girl or wishes on her worst enemy.

The rebellion of adultery resurfaced every tired self-preservation pattern of my youth, like self-harm and substance abuse. The extreme rush of adrenaline needed to maintain such a secret required payment in increased blood pressure, insomnia, chronic headaches, and the buildup of stress-induced toxins in my bloodstream.

Over the course of two years, my sifting led to handfuls of anxiety attacks and two hospitalizations. My sifting dropped me from 140 to 98 pounds, caused the hair to fall out of my head, ushered in my first cavities, made eczema break out on my arms, and aided in the formation of a malignant tumor in my abdomen.

Like Eve, I had been deceived, and my mind led astray from a “sincere and pure devotion to Christ” (2 Corinthians 11:3). My conduct was overtaken with sin (Galatians 6:1). I had turned against my very own body (1 Corinthians 6:18), and now I was at war, not with other people or myself but against the rulers and authorities “over this present darkness” (Ephesians 6:12 ESV). My divided, depleted, detached self could hardly lift herself out of bed each morning, much less wield a sword “against the spiritual forces of evil in the heavenly places” (Ephesians 6:12).

If it were just about my sin, or yours, we would be crushed under the weight of it. Think about all of the ways we distrust God every day, all of the things we say and don’t say, give and withhold in a matter of moments or hours. It’s too much. Sometimes, I don’t even realize I’m sinning. Some days, my habits are just so deeply engrained that I cannot see the damage they’ve done until something important has crashed and burned at my feet.

Our sin is the only thing strong enough to kill its own self off.

In God’s eyes, the course we take in our lives is not just about our sin. There’s no sliding scale or big and little sins at the foot of the Cross. Instead, the purpose of God’s permitting our sin is to produce the destruction of it. Our sin is the only thing strong enough to kill its own self off. We wouldn’t know that our delights were so weak if we never tested them out.

Humans rarely see wickedness and rebellion the way God does — as useful.

God is using our lives to show us a faith that no longer turns on a dime, a relationship with Him that no longer caves to emotion or rushes into the arms of another. So, He gives us over to our sin that we may finally be done with it.

Like Peter, myself, and countless others, your sifting may come when you least expect it, or when you’re standing face to face with Jesus. But if you truly hate disbelieving who God says you are, if you really want to believe Him, I implore you to let the sifting happen. Let your sin be about the business of killing itself off, taking with it every wimpy, unsatisfied desire until not one of them is left standing.

No matter how many years you’ve been shaking your fist, shopping, or sleeping around, once God’s sights are locked in on you, it’s only a matter of time.

Weep, mourn, sing, shout, and dance if you hate the thing you also want to do. For you are really saved and really going to Heaven.

Only authentic believers feel sorry for their sin.

So if you do, go right ahead and drop to the ground, scissor-kicking through the loudest belly laugh you’ve got. Because you’re in. He wants you.

You are not too far gone, too sinful, or too boring. But you are His.

God does not waste our sinfulness. He uses it to establish Himself as the more desirable option.

Think about your biggest, most life-upending, painful, awful sins for a moment. Don’t you hate those memories? God can, and will, use those in your life for His glory if you let Him. He is yours and you are His. Come share your thoughts with us on our blog. We want to hear from you! ~ Devotionals Daily