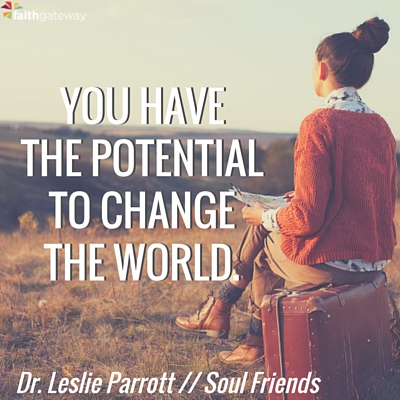 I did not write it. God wrote it. I merely did His dictation. ~ Harriet Beecher Stowe

One of my heroes is a saint named Hattie. A mom in her forties, Hattie was sitting in church one day, taking communion, when suddenly she had a vivid vision of an old slave being beaten to death. The vision shook her deeply, and she wept.

After church she quickly walked her children home, sat down, and began to put her vision down on paper. When she ran out of paper, she kept on writing on a grocery bag. What she wrote eventually became a book, published in 1852. It was titled Uncle Tom’s Cabin. It quickly became a runaway bestseller, outpacing sales of every book in its day except the Bible. And Hattie, who is more formally known as Harriet Beecher Stowe, became “the little woman who wrote the book that started this great war,” as Abraham Lincoln himself noted.

Hattie didn’t get her moving vision in some kind of spiritual vacuum. Hattie’s mother died when she was just five years old, leaving Hattie and her thirteen siblings motherless. Hattie had her own share of grief, her own fill of sadness.

Still, her father saw to it that she received an education in the classics, an education which in her day was characteristically confined to males. In her twenties she joined a literary club of aspiring writers (where, coincidentally, she met her husband); they called themselves the “Semicolon Society.” Don’t you love that? How hip! The semicolon: a punctuation mark that indicates a pause that is longer than a comma yet shorter than a period. How perfectly ambiguous and completely literary. The students at Seattle Pacific University where I teach would relish a club like that.

Well, this literary hipster of the 1800s and her husband had been participating in the Underground Railroad, providing temporary housing for fugitive slaves in their home already filled with their seven children, and she had served as anamchara* to many individuals along the way. Out of those personal shared moments with the fugitives, entering into their stories, she was able to serve as an anamchara in a big way, ushering an entire nation through the birth pangs of freedom and dignity for all races.

Harriet Beecher Stowe firmly believed that women had the power and the moral obligation to serve as agents of change and transformation in the world. She also believed that Christ’s love was powerful enough to take on the dark, entrenched evils of slavery. Finally, she believed that she was called to play a part in that epic battle. So she opened her home to fugitive slaves, and she opened her heart to God’s vision, and she opened her talents to God’s purposes. Hattie’s story teaches us what it looks like to pursue a long and dangerous quest, one that has the potential to change the world.

1. If you’ve ever felt led by the Holy Spirit to undertake a potentially difficult quest, describe the experience.

2. How has God already used your gifts and abilities and personal dreams to make a difference in the world around you? What difference might He be asking you to make next?

Excerpted with permission from Soul Friends: What Every Woman Needs To Grow In Her Faith by Dr. Leslie Parrott, copyright Zondervan.

Women, what if we had the boldness and bravery to do what God was asking us to do no matter how difficult or daunting the task might be? What might change in the world around us? Come share your answers to Leslie’s Soul Souvenir questions on our blog. We want to hear from you!