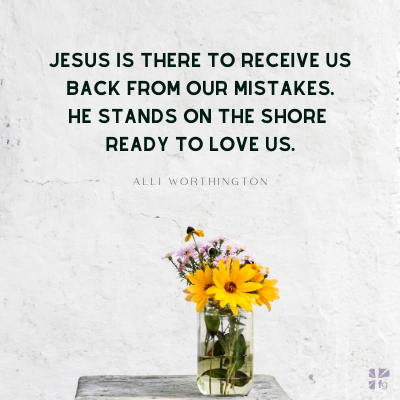 Peter is my favorite disciple because of how obviously flawed and human he is. (Man, can I relate to Peter!) After he denied knowing Jesus three times, he was completely (and pretty understandably) devastated. Believing his time as a disciple was over, he returned to his previous way of life as a fisherman. (Isn’t that like all of us? When we feel lost, we return so quickly to our old ways. But even when we do, God continues to come after us!)

As Peter sat in his boat, along with the other disciples, he felt lost. Not only had he failed to come to the aid of Jesus when He needed him most, now Peter couldn’t even catch fish! He’d been fishing all night and had nothing to show for it.

John, who was with Peter on the boat, announced it was the Lord on the shore, and Peter leapt into the water to find his way back to Jesus.

Peter didn’t stay stuck in his own failures on that boat. He wasn’t going to waste another minute finding his way back into Jesus’ arms.

By the time Peter reached Jesus on the shore, I’m sure he expected Jesus to let him have it. Instead, he found Jesus ready to receive him back into His grace — and with a hot breakfast to top it off!

How often do we do this in our own lives? We are so quick to replace the grace-filled words of Jesus with the condemnation we feel we should get for our mistakes. We forget that because of Jesus there is no longer any condemnation left for us! Jesus received our punishment so we could instead receive His love. Romans 8:1 affirms this for us:

There is now no condemnation for those who are in Christ Jesus.

Jesus is there to receive us back from our mistakes. He stands on the shore ready to love us!

Think about an occasion when you spent time beating yourself up over a mistake. Now imagine what Jesus would say to you. Write yourself a letter from Him in which He tells you how He feels about you. Remember, just like with Peter, Jesus isn’t there to condemn you but to love you.

When was the last time you left a failure behind and leapt after Jesus? You don’t have to be devastated anymore. Jesus is waiting for you with open arms and delicious grace! Come share your thoughts with us on our blog. We want to hear from you about having breakfast with Jesus! ~ Devotionals Daily