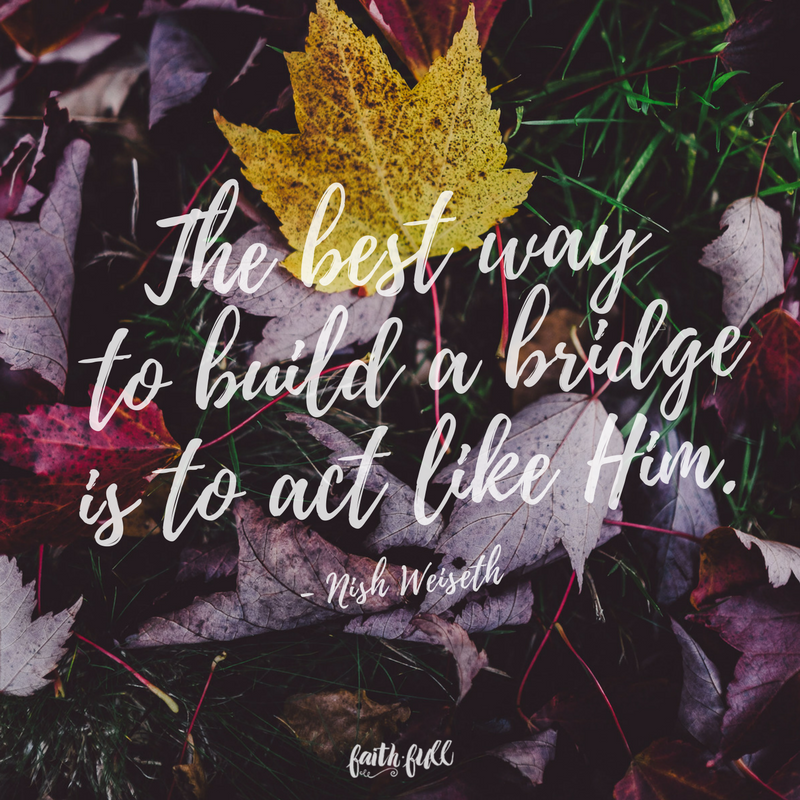 One of my favorite stories about Jesus is found in the gospel of John, when He sits by a well and chats up a Samaritan woman who came to draw water. Since the kingdom of Israel had been divided in 922 BC and Samaria had become the capital city of the northern kingdom, there had been a long-standing conflict between the Jews and the Samaritans. Just over two hundred years after the division, the northern kingdom was taken over by Assyria, and the Israelites were forced out, replaced with five foreign tribes that settled there. (See 2 Kings 17:13-34.)

After many years, the Israelites of the northern kingdom returned and intermarried with the people from the five foreign tribes of Assyria. By the time Jesus came around, Jews thought the Samaritan people were not true Jewish descendants and that their religious practices were not truly Jewish, but rather an unclean mixture of several cultural religions of the day. Jews simply did not have any dealings with Samaritans, and vice versa. A similar example would be the conflict between Sunni and Shiite Muslims, two sects of Islam that often, and continually, accuse the other of heresy. (Or, on a lighter note, sort of like the Red Sox and the Yankees.)

So Jesus boldly defies the norms of the day in several ways:

• On His journey, He decides to walk through Samaria instead of around it.

• He speaks with a Samaritan, which was unheard-of in Jewish culture.

• He doesn’t speak with just any Samaritan; He speaks with a Samaritan woman.

• He asks her to draw Him a drink of water. (In Jewish culture, sharing her cup of water would have made Jesus ceremonially unclean.)

I absolutely love that Jesus does this. By simply sitting down, talking, and having a drink of water with this woman, He breaks several cultural and religious norms and extends His hand of grace by offering her knowledge of the greatest gift — living water, or Jesus Himself.

I also love that Jesus knows her story. He knows she doesn’t have a husband and is living with a guy. He knows she’s actually had five husbands in the past. And yet, He sits with her and answers her questions.

It’s a remarkable picture of Jesus taking the time to know someone across a religious and cultural divide and engaging, regardless of what religious folks would think or say about it.

When Jesus sits and speaks with the Samaritan woman, they don’t have an argument or a debate over Jewish practices versus Samaritan practices. In fact, they talk only briefly about the differences between their religions. Jesus does so ever so gently, and throughout their conversation, He sets the stage to tell this woman about Himself. Jesus tells her about how she can access living water, the source of eternal life.

The hard and beautiful thing about following Jesus is that we are invited and called to act like Him. [tweet this] Following Jesus is an ongoing, transformational process, and, as believers, we’re invited to be a bit more like Him every day. Sometimes that means having conversations that feel uncomfortable…

To pattern our lives after Jesus is to take the time to hear each other’s stories, get to know each other, and allow ourselves to be transformed by the “living water” message of Jesus before we debate theology and doctrine, argue over the best way to “do church,” or judge a church’s flashy lights and programs — or the lack thereof. The Spirit of God is at work in all believers, and so many of the divides in the church could be healed if we stopped to listen to the ways in which the Spirit is working in each other’s lives.

The person sitting across the theological divide may very well look like a Samaritan to us. But the witness of Jesus has taught us that it makes no difference. What an opportunity we have when we choose to walk through Samaria, sit down, listen, speak, share, and communicate what’s most important — our story and the story of God at work to transform lives, refine us, and fill us with His living water.

Jesus invites us to be builders of bridges, and the best way to build a bridge within the church is to act like Him.

It’s time to go sit at the well and speak grace as we spend time with those who think differently, believe differently, worship differently. Rather than avoiding that person or that group, what if we choose to sit down and talk?

Excerpted with permission from Speak by Nish Weiseth, copyright Zondervan.

Who are the “Samaritans” in your life? Who do you separate from, not interact with, or feel very different from? Does the thought of sitting down and hearing their stories make you worry it would be an uncomfortable conversation? How can you interact like Jesus did with that group or person? A while back I found out that a friend of mine had had an affair years ago during his first marriage. This was definitely an issue I have held a grudge against. But, when he told me his story, about his anger, his disillusionment, the temptation, the sickness of sin, about the pain it caused, the shame and brokenness, the repentance, the divorce, the heartbreak he caused his ex-wife and kids, the years of very little relationship with the people he loved and nearly lost, the long-sought-for forgiveness they finally reached, and the joy of rebuilding, my heart cracked open for him. I saw him less as a “Samaritan” than as a brother just as sinful, broken, and yet still loved by God as I am. Have you had that experience? Leave a comment on our blog! We’d love to hear your thoughts! ~ Laurie McClure, Faith.Full