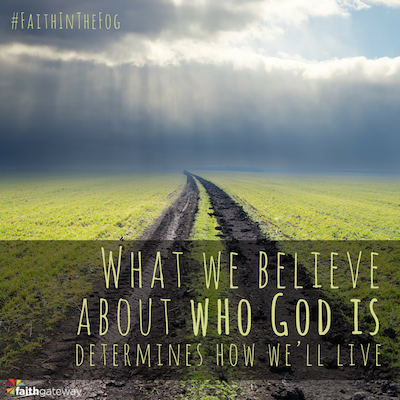 He called out to them, “Friends, haven’t you any fish?”

He said, “Throw your net on the right side of the boat and you will find some.”

When they did, they were unable to haul the net in because of the large number of fish. Then the disciple whom Jesus loved said to Peter, “It is the Lord!” As soon as Simon Peter heard him say, “It is the Lord,” he wrapped his outer garment around him (for he had taken it off) and jumped into the water. The other disciples followed in the boat, towing the net full of fish, for they were not far from shore, about a hundred yards. – John 21:5-8

Nothing in my hand I bring, simply to the cross I cling. – Augustus Toplady, “Rock of Ages”

Our churches are filled with people who outwardly look contented and at peace but inwardly are crying out for someone to love them… just as they are… confused, frustrated, often frightened, guilty, and often unable to communicate even within their own families. But the other people in the church look so happy and contented that one seldom has the courage to admit his own deep needs before such a self-sufficient group as the average church meeting appears to be. – Keith Miller

Try asking that of any fisherman sometime, if you dare. Stroll up to an angler who has been parked by a lakeside all night. Peer into his bucket or the storage net that dangles from the bank. If you notice that there’s no catch, then go ahead, make his day.

Now put that question to seven irritated, sleep-deprived fishermen, some of whom were professionals, and you’re definitely asking for trouble. Or, as happened when Jesus put the question, you’re trying to help your dear friends out of trouble.

I’m not sure what is the greater miracle — the huge catch of fish, right on cue, or the fact that a group of exasperated fishermen took the advice of an inquisitive stranger. When they let the nets down at His instruction, they still didn’t know that their self-appointed fishing instructor was Jesus.

Too many of us live tortured, unsatisfying Christian lives because we worship a Jesus who is good at commands but never asks questions; who is a demanding employer but not a caring, tender friend; who asks us to do the unreasonable but never says “well done.”

What we believe about who God is determines how we’ll live.

We all have a version of what Jesus is like. What is your version? When a person becomes a Christian, he or she doesn’t immediately download a balanced, orthodox, coherent understanding of Christ. Our faith is a patchwork quilt, the stitching together of thousands of conversations, fragments from courses we’ve attended, and chatter we’ve shared after services.

Picture this, if you will. Imagine that the disciples see a Man standing on the beach, His feet spread, His hands on His hips, a gesture of disgust. They peer through the dawn mist, and even from that distance, they feel that He is glowering at them; they sense His disapproval.

His stare is fixed, his eyes cold. Suddenly something erupts in Him, and He paces now, just a few steps, back and forth, His fists balled, His back bowed forward in angry tension. He stops and slowly turns and looks out at the boat, straight at them. He cups His hands to His mouth and yells, His voice bellowing across the water, an otherworldly sound. His words are laced with rage. “Get that boat of yours back here! Now!”

Frantically they grab the oars and pump them as fast as their spent strength will allow. He watches them in silence, the grimace on His face speaking volumes. When they near the beach, His voice is trembling, the anger obvious and barely controlled. “Just look at you. As soon as you got home, what did you do? You head back to the nets again. So that’s how the so-called fishers of men end up. And look at you all. You can’t even land some fish in a lake that’s teeming… ” He breaks off. “It’s pathetic. You’re pathetic.”

Is that anywhere close to your perception of God? Does He stand on tiptoe, always on the brink of judgment, finger poised on the smite button? Has He decided not to condemn you for now, because of grace, but you’ve no idea how long the amnesty will last? Rather than being hopeful for your success, does He expect you to fail because although you believe in Him, He doesn’t believe in you?

If that’s your Jesus, He’s not the same as the Jesus who stood quietly on that beach.

Of course, while Jesus did at times get frustrated with His disciples, the Jesus I worshiped in my earlier years seemed to be always frustrated with me. Whatever I did, I always anticipated the Red Pen Treatment that my high school teachers gave to my indifferent attempts at homework: C minus. Could do better.

My Jesus back then was eternally unimpressed, His love for me a concession, not a passion. He certainly wasn’t into beaches and breakfasts.

“Friends, haven’t you any fish?”

I’m glad to say it’s a poor translation, because the word doesn’t carry the weight or warmth of the word that Jesus used to address that weary group. A better translation is “children” or “lads.”

I lost sight of the truth that Jesus sees me as a lad, as a child. It might have been the product of my becoming a minister at such a very young age. I felt that I had to be very grown up and responsible from my earliest days of faith.

Children play. They make a huge mess when they paint, often eating more paint than they put on paper. They misunderstand, ask endless questions, and giggle a lot.

My Christianity was the intense, furrowed-brow kind. I didn’t realize early in my faith that Jesus knew full well that I had the capacity to not hear or to misinterpret His directions. Even as a new convert, I couldn’t conceive that He saw me as a learning, growing child. I felt the responsibility to get it right very squarely on my shoulders, and it was a crushing weight. I repeatedly read that promise of His about His yoke being easy, and His burden light, and wondered what on earth He was talking about, because it certainly didn’t feel that way to me.

I was desperately trying to be very grown up. One of the saddest by-products of gaining so-called maturity is the loss not of childishness, but of being childlike.

Jesus shocked His disciples by pointing to a child as an example of how to navigate the kingdom. In a culture that did not cherish or value children as we do today, this was a stunning idea. Jesus made it clear that it was not simplicity, innocence, or even just trust that He was celebrating, but rather the ability that a child has to receive.

People were bringing little children to Jesus for Him to place His hands on them, but the disciples rebuked them. When Jesus saw this, He was indignant. He said to them,

And He took the children in His arms, placed His hands on them and blessed them.

I believe that my “adult” intensity was part of my depression. Acknowledging that Jesus knew my fragility and vulnerability, that He wanted me to receive His love and forgiveness simply, like a child, was beyond me then. Surely that would have helped me avoid some of my darker days.

It’s a strange question we British people often ask when we are looking for a product to buy. We walk into a store — say, a hardware store — and ask, “I don’t suppose you sell screwdrivers, do you?” It’s a nonsensical way to carry on, really. If we suspect that they don’t carry the product, why on earth are we wasting our time — and theirs — by going in to ask? But Jesus did just that. His question had a negative expectation built into it: “Haven’t you any fish?”

The English translation is very good in this instance: He prefaces His question with a word that anticipates a negative answer. There is an inference, an assumption, that they will answer that, no, it’s been a bad night. No fish indeed.

They confess it: their nets are empty. There’s no attempt by the disciples to blather on about the ones that got away, the difficult conditions, fish stocks being down, or the fabulous hauls of fish that were normally theirs. They answer with blunt simplicity, without any excuses made. “No.” They simply own up to the night’s failure. He has helped them to do just that and expresses no surprise or disdain.

It might come to us as a surprise that Jesus is never surprised by us.

If He is all that He says He is, then He knows every detail of who we are.

No hair on our head is uncounted. He does not love us with ridiculously high hopes, nor with a romantic love that screens out our ugliness. A. W. Tozer writes the following:

How unutterably sweet is the knowledge that our Heavenly Father knows us completely. No talebearer can inform on us, no enemy can make an accusation stick; no forgotten skeleton can come tumbling out of the closest to abash us and expose our past; no unsuspected weakness in our characters can come to light to turn God away from us, since He knew us utterly before we knew Him and called us to Himself in the full knowledge of everything that was against us.

He knows us utterly, and loves us utterly, even when we come to Him empty-handed. That’s how we were when we first decided to follow Him. And that’s how those disciples had first met Him too, three years earlier. Empty-handed. Or, more specifically, empty-netted.

There’s nothing we can do to change God’s love for us. His love is amazing and unending and we don’t have to do anything to earn it. Join the conversation on our blog! We’d love to hear from you! ~ Devotionals Daily