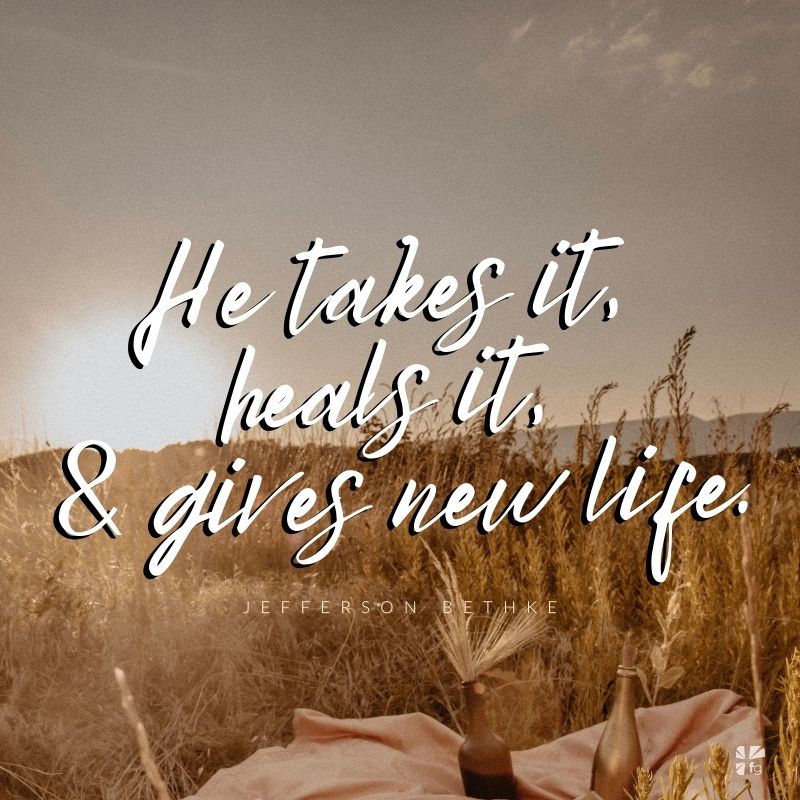 I had just moved in with my aunt and uncle while attending community college, and I was sitting on their couch about midday, ugly-face crying. If you’ve done the same, you know what I’m talking about. It’s where a cry session turns the corner and becomes a full-blown weep.

I was really struggling at that time with a bunch of things — depression, things I’d done wrong, disenchantment and disillusionment with this whole Jesus-following thing. I finally broke and shared all the hurt, pain, and ache I had been holding on to.

It was the first time I had been really honest and taken off my mask. Whether it was friends asking how I was doing and always answering with the cliché “Fine,” or those dark thoughts I always had of If people knew the real me, they’d run as fast as they could in the opposite direction, I constantly played the game of projecting a certain version of myself.

I can’t describe the sense of freedom I had when weights fell off my shoulders in that moment. I remember my aunt and uncle just listening, encouraging, and reminding me how much God loved me. It was truly healing.

Maybe you haven’t heard this before — I know it took me a long time to realize it — but that kind of brokenness is essential to this thing called Christianity.

We all have wounds — things that make us physically cringe just thinking about them. They could have been caused by something we’ve done or something that’s been done against us; regardless, emotional wounds are sensitive.

For me, there are all the poor choices I made in high school and college that to this day haunt me when I’m not focusing on grace and Jesus. Or memories of growing up in a household with only one parent, when most of my friends had traditional families. Or tough breakups that give you that sense of searing pain that not much else does.

The problem with wounds, though, is that our first inclination is to cover them. We think if we just slap a bandage on, it’ll heal by itself. And sometimes that might be true, but when it’s a really bad wound, that only makes it worse. No one can see it, but it’s festering. If left untreated, a covered wound can get an infection, which, if bad enough, could even kill you. Oxygen and daylight are some of the first steps to healing a wound.

What if that’s what it’s like when we don’t deal with the wounds in our hearts? Nelson Mandela reminded us, “Resentment is like drinking poison and then hoping it will kill your enemies.” Resentment or bitterness is a symptom of a spiritual wound. We get angry. We lash out. If you touch a wound, people coil back and cringe because it’s so sensitive.

What would someone have to touch in your life for you to react like that? To recoil? To cringe?

What if God wants to heal that? What if he wants to turn your wounds into scars?

The interesting thing about scars is that we don’t hide scars as we do wounds. Wounds we cover; we mask; we make sure no one can see or touch. Scars are the opposite. We aren’t afraid to show our scars because they tell a story.1

I have a little tiny scar on my upper lip because I thought it’d be a great idea to eat a dog’s food when I was a year old. The dog didn’t think it was so genius, and he bit me in the face.

I have a one-inch clean scar on my right knuckle. I found my mom’s pocketknife as a kid, took it into a hiding place, and began playing with it. Of course, I wasn’t too sure what it did so I tested it on my pointer finger. It sliced me right open.

Scars tell stories. And for the most part, if people see a scar, they ask about it, and we are not afraid to tell them. Because they don’t hurt anymore. You can touch any of my scars, and they don’t hurt; I don’t cringe or pull back. It’s just an opportunity for me to tell you what happened and how it’s been healed.

What if Jesus wants to take our wounds and turn them into scars? We don’t have to be ashamed of them anymore. We can bring them to the Healer (a name God calls Himself in Exodus 15:26).

Sometimes, though, it’s not that easy. Some wounds get healed the minute we come to Jesus, while others are a lot harder to walk through.

And it’s in those moments I have to remember two things.

First, I can’t buy the lie that God doesn’t care or is aloof in those moments. He’s not distant or far away. He’s right there in the middle of the guilt, revolting thoughts, and self-condemnation. He’s whispering.

He’s there. He knows. He heals. He comes close.

Second, I have to remind myself that past mistakes are not the truest things about me. It’s just phantom pain. Someone who has lost an arm, a leg, or some part of his body might experience phantom pain. It’s when you feel sharp pain in a part of your body you don’t even have anymore.

This phantom pain is not real even though brain synapses are firing and telling the person it is. I can’t imagine how hard in that moment it is to believe it isn’t real, even when you’re able to look down and see you have no left foot. The pain is so sharp and vivid. But at the end of the day, the pain is simply not true.

I think that’s a lot like what we feel in those regretful moments. When the same sin or same grief or same guilt keeps replaying, or when we drive by something that reminds us of it, or see something on Facebook that shoots a sharp guilt pain through our bodies, we have to remind ourselves that’s phantom pain. It’s not real. It’s not the truest thing about us. In God’s dimension, Heaven, He has declared that when we follow Him we are new. We are clean. We are forgiven. We are His children. He delights over us. He isn’t distant, but near.

And those are the truest things about us. Not the voice of the wound. We can put our feet down in that moment, cry out for help, hang on tightly, and keep reminding ourselves that’s not real. It’s a scar. It’s been healed.

Are you letting Jesus turn your wounds into scars? What if Jesus wants to heal the dark parts in your life, so then you can turn around and tell others just how good He really is?

Only when a wound is a scar will we let it tell a story. You can then point at the scar and say, “Look what Jesus did.”

In Japanese culture there is a type of pottery art called kintsugi that deals with broken items such as clay pots, vases, and bowls. When a bowl or pot breaks, kintsugi artists put it back together using a lacquer mixed with either gold, silver, or platinum.

When the pot is put back together, the gold, silver, or platinum veins running through the pot exactly where it had previously been broken are the most eye-catching. The new glory of the beautiful creation is the golden-laced broken pieces that have been repaired. If you google this art form, you’ll see what I’m talking about — it’s remarkably beautiful.

With kintsugi, when something becomes broken, it doesn’t become less valuable. The new golden-laced repair makes it more valuable. It doesn’t try to hide or disguise the imperfections, but instead puts them on full display in all their beauty and glory.

I don’t think we are much different when we come to Jesus. Some of the most inspiring people we know are those who have been hurt, who have suffered, or are broken, yet they still have a peace, joy, and resilience about them. Scars don’t hide our history; they show it. And when we show our scars, we get to point to the Healer who wove His grace right into the depths of every crack and fragmented part in our soul.

Whatever the wound is, something deep like assault or something seemingly insignificant that still stings, know that healing comes from Jesus. He takes it, heals it, and gives new life.

Take off the mask. (We all want to, right?!) Brokenness is essential to Christianity, to our relationship with Jesus. What if He wants to change those wounds to scars? What would change for you? Come share with us on our blog.